Underwater Kelp Forests Are Declining Around The World 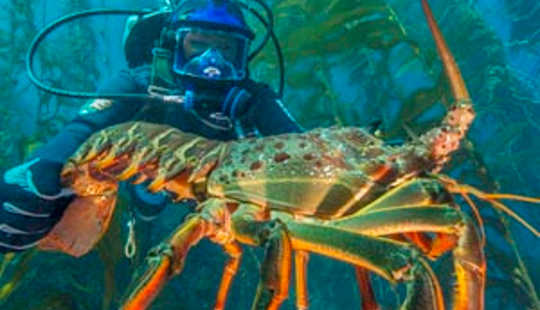 Kelp forests are declining around the world and in Australia, according to two new studies.

The first, a global study published in the journal PNAS, found that 38% of the world’s kelp forests have declined over the past 50 years.

The second, published in the same PNAS edition, investigated one cause of the declines. Kelp forests in eastern Australia are losing out to tropical species as the seas warm.

Together the studies show that we need local and global solutions to prevent our underwater forests from vanishing.

Satirist Jordan Shanks recently argued that marine biologists may well have the worst job on Earth. Although most people think we spend our days diving in crystal-clear blue waters, spotting whales and sailing into the sunset, this is actually quite far from the truth.

More often than not, our job unfortunately involves documenting the depressing deterioration and decline of precious marine habitats.

While bleaching of coral reefs worldwide has been front and centre in the news over the past year, in fact all of our coastal ecosystems have been affected by human impacts.

One such ecosystem is the underwater forests formed by the large seaweeds known as kelp, which dominate temperate, coastal rocky shores worldwide.

Kelp forests are found in waters off all continents, and around Australia they form the Great Southern Reef which stretches from the Queensland border to near Kalbarri in Western Australia, and contributes more than A$10 billion annually to the Australian economy. Although this year’s global coral bleaching event has been most featured in the media, we should be at least equally concerned about the loss of kelp forests in cooler waters. Clockwise from top left: A. Vergés, Creative Commons, J. Turnbull, A. Vergés

In the first study, the authors provide the first ever global “health check” for kelp forests. A team of international experts compiled and analysed a data set of kelp abundance at more than 1,000 sites across 34 regions around the globe.

But there is another big problem: there are many regions where kelp exists, but we have no data and simply no idea how it’s doing.

In Western Australia kelp forests were wiped out during an extreme marine heatwave, which was probably a consequence of climate change. In South Australia, the kelp has succumbed to years of pollution from nutrient-rich wastewater.

And in Tasmania, warming has enabled a kelp-eating sea urchin to jump from the mainland and graze on local kelp forests. This was compounded by overfishing of large lobsters, which normally eat the urchins.

The second paper shows that a phenomenon known as “tropicalisation” of ecosystems is now threatening kelp forests in New South Wales, and potentially globally.

Tropicalisation occurs as ocean waters warm and tropical species start making a home in habitats previously dominated by cold-water species. In the case of NSW kelp forests, these tropical intruders are herbivorous fishes that eat the kelp – sometimes down to the ground.

Our initial research has shown that, over ten years, lush kelp forests have completely disappeared in some key offshore sites at the Solitary Islands Marine Park. This region is famous for bringing together a unique mosaic of tropical and temperate habitats, but our data clearly shows that tropical species are winning and starting to take over.

We were able to quantify the year-by-year decline of kelp using a long-term video dataset collected by Hamish Malcolm from the NSW Department for Primary Industries.

The video footage revealed not only the gradual decline of kelp, but also helped us identify fish as central culprits behind this disappearance. Between 2002 and 2012, we saw both an increase in the number of fish bite marks on kelp and a clear rise in the abundance of warm-water seaweed-eating species.

We also ran a series of kelp transplant experiments, which identified two warm-water fish species that rapidly consumed transplanted kelp within hours: a rabbitfish and a drummer.

Interestingly, however, the species that we think had the greatest effect, surgeonfish, did not actually feed on the adult kelp. Instead, the surgeonfish rapidly consumed smaller carpet-forming seaweeds. This suggests these “tropicalising” fishes maintain deforested reefs by removing kelp while they are tiny, before they start making large fronds.

These NSW findings are by no means an isolated phenomenon. Voracious consumption by invading warm-water fish have also been linked to the loss or failure to recover of kelp forests in Japan and in Western Australia.

Frenzied feeding on transplanted kelp by a school of rabbitfish (Siganus fuscescens) is only briefly interrupted by a large predator in the Solitary Islands, eastern Australia.

Both studies found a net decline in the abundance of kelp forests, from both local (nutrients, fishing) and global (ocean warming and its effects) effects of humans. If we want to arrest these declines, action is therefore required at both local and global scales.

Locally, water quality around some major cities has been improved. When coupled with active restoration efforts of damaged seaweeds, this can lead to conservation success stories like the return of crayweed forests to Sydney. Marine reserves, where fishing is prohibited, can also reduce the ability of warm-water species to colonise cooler habitats.

But of course, ultimately, global action is needed to prevent further climate change impacts. That includes reduction in our greenhouse gas emissions, in Australia and around the world. by Greg Asner
Earth’s cornucopia of life has evolved over 550 million years. Along the way, five mass extinction… by Stuart Reynolds
Despite their ubiquity in the animal kingdom, a recent report warned of a “bugpocalypse”, as…