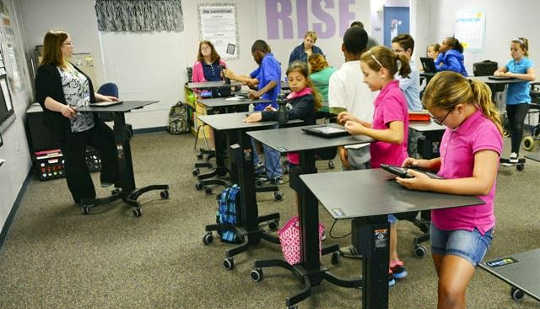 “Research around the world has shown that standing desks are positive for the teachers in terms of classroom management and student engagement, as well as positive for the children for their health, cognitive functioning and academic achievement,” says Mark Benden, an associate professor in environmental and occupational health at the Texas A&M School of Public Health and an author of the study published in the American Journal of Public Health.

“It’s literally a win-win, and now we have hard data that shows it is beneficial for weight control.”

Same results for boys and girls

Twenty-four classrooms at three elementary schools (eight in each of the three schools) in College Station, Texas, participated in the study. At each school, four classrooms were outfitted with stand-biased desks (which allow students to sit on a stool or stand at will) and four classrooms in each school acted as a control and utilized standard classroom desks.

The researchers followed the same students—193 in all—from the beginning of third grade to the end of fourth grade.

The researchers found that the students who had the stand-biased desks for both years averaged a three percent drop in BMI while those in traditional desks showed the two percent increase typically associated with getting older. However, even those who spent just one year in classrooms with stand-biased desks had lower mean BMIs than those students in traditional seated classrooms for their third and fourth grade years.In addition, there weren’t major differences between boys and girls, or between students of different races, suggesting that this intervention works across demographic groups.

“Classrooms with stand-biased desks are part of what we call an Activity Permissive Learning Environment (APLE), which means that teachers don’t tell children to ‘sit down,’ or ‘sit still’ during class,” Benden says. “Instead, these types of desks encourage the students to move instead of being forced to sit in poorly fitting, hard plastic chairs for six or seven hours of their day.”

Previous studies from Benden’s lab have shown that children who stand burn 15 percent more calories, on average, than those who sit in class, but this is the first study showing, over two years, that BMI decreases over time (versus controls) when using a stand-biased desk.

“It is challenging to just measure weight loss with children,” Benden says, “because children are supposed to be gaining weight as they get older and taller.”

The fact that the students who started at a healthy weight benefited from stand-biased desks as much as they did might indicate that these desks help students who aren’t overweight maintain their BMI, while at the same time help those who start out overweight or obese get to a healthier weight.

The desks, designed by Benden and his team, are called stand-biased, not “standing” because they do include a tall stool the students can perch on if they so choose. They also include a footrest, a vital feature because it allows children to get their lower backs out of tension and reduce leg fatigue to stand more comfortably over time. These United States-patented desk designs are now licensed to Stand2Learn, which has commercialized the products through translational research focused on moving university studies to publicly available solutions. by Christina Sumners, Texas A&M University
A nasal spray can limit damage to the brain from a seizure disorder called status epilepticus, a… by Christina Sumners, Texas A&M University
Scientists have long puzzled over how breast cancer can suddenly reappear, often with a vengeance,… Universities Need To Train Lecturers In Online Delivery, Or They Risk Students Dropping Out

by Pauline Taylor-Guy, and Anne-Marie Chase, Australian Council for Educational Research
Most universities have moved courses online to prevent the potential spread of COVID-19. This… by Matthew Adams, University of Brighton
Time to make nature studies a compulsory school subject – before it’s too late. “Every child in… The problem with online learning? It doesn't teach people to think

by Robert Danisch, Professor, Department of Communication Arts, University of Waterloo
The modern research university was designed to produce new knowledge and to pass that knowledge on…

by Robert Jennings, InnerSelf.com
There has been much written since the election about what went wrong. The wrong was not so much…

What Can We Do to Help the Whales and the Planet?

by Nancy Windheart
Many people are concerned about the whales… Good-hearted people feel helpless, and ask, “is there…

by Marie T. Russell
Imagine... a world where any time you inflicted pain, whether physical or emotional, unto any other…