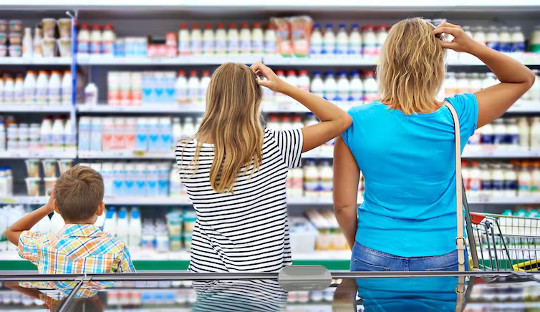 Consumer price inflation in the UK slowed for the first time in nearly a year in August. A fall in petrol prices helped slow the overall rate but food prices continue to rise rapidly. But even with a slowdown to 9.9%, from 10.1% in July, inflation still remains close to the highest its been for a generation.

After inflation hit double digit rates earlier this year for the first time since the 1970s, many looked back to compare what’s happening now with what happened then. But this comparison is problematic because it’s not just hairstyles and fashions that have changed over the past 50 years.

Consumer habits are also very different and that means inflation will have a different effect on how people spend and save, not to mention the products they buy, this time around.

For starters, markets are very different today compared with the 1970s. The internet and globalised supply chains have encouraged competition from multiple sources, with people no longer limited to the goods and services that are available locally. Economies are also increasingly based on services, rather than goods, while definitions of essential versus discretionary spending have changed.

Another major change is the deregulation of many state-provided monopoly services since the 1970s. Regardless of whether or not you think this has benefited society, it enables greater price competition.

For example, instead of a monopoly parcel service – the Post Office – passing on increased costs knowing that customers have little alternative, competition between providers such as Parcelforce, Hermes and DPD, among others, can help to keep prices low.

But there are certain product changes that businesses can and do make to try to quietly fold increased costs into prices. Here are three to look out for:

Unsurprisingly, sales of retailers’ “own label” groceries tend to rise when disposable income falls. In line with this, shops and supermarkets have responded to recent inflation by promoting “basic” or “essentials” ranges at low price points. This also happened in the 1970s.

Own label groceries are generally more profitable to retailers than selling manufacturers’ branded products anyway. But the very low price point leaves little profit margin and so supermarkets face a dilemma in that promoting budget ranges could cannibalise sales of higher margin products.

On the other hand, promoting individual products with low prices helps retailers give off a perception of affordability and good value. Among the UK grocery retailers, budget discounters gained ground during the financial crisis of 2007-8.

As inflation has soared more recently, Aldi and Lidl gained a combined 1.8% of UK grocery sales in the 12 weeks to August 7, 2022, representing a £2.3bn annual shift in spending. Aldi has also recently overtaken Morrisons to become Britain’s fourth largest supermarket.

Retailers’ keenness to come across as consumer champions fighting inflation has also been seen recently during what are normally routine supply negotiations. In July, a dispute over a price increase for products including tins of baked beans saw supermarket Tesco freeze its orders from food company Heinz.

The prospect of a Heinz-shaped space on the shelves of one of the UK’s major supermarkets quickly hit the headlines and the resulting publicity was arguably a win-win outcome for both: Tesco was seen to be fighting for the consumer, while Heinz emphasised its premium product values.

During times of inflationary cost pressures, a common strategy for manufacturers of fast moving consumer goods such as packaged foods, beverages and cosmetics, has been to hold the price of a product, but shrink its contents.

Often called “shrinkflation”, this quiet process can then be reversed when input costs fall again. That’s when the manufacturer will loudly promote a new, bigger product with a percentage “extra free”.

Reference prices (which allow comparisons of different products on a cost per amount basis) are now less readily visible partly because bar coding has replaced individual labels that continue to remind consumers of price after purchase, every time a product is used.

The rise of online shopping has empowered consumers to make their own comparisons, however. A simple web search can easily expose shrinkflation by allowing immediate comparisons of price per unit of weight/volume.

It is too simplistic to say that firms make things and consumers consume them. In fact, many of the products that we consume result from the combined efforts of producer and consumer.

Inflationary pressures can lead to consumers substituting their own inputs for manufacturers’ own expensive inputs even more. Flat-pack furniture, for example, has reduced cost pressures on manufacturers and enabled consumers to make savings by undertaking parts of the production process themselves.

This trend towards “co-production” is even more marked in services that are actually more dominant in national economies today than in the 1970s, for example banking, much of which has moved from branches to online. Self-service, whether willingly or not, is another way that the effects of inflation can be mitigated.

Long-term changes in consumer behaviour are more likely to emerge as a result of multiple factors rather than one single issue. And so the consequences of inflation this time around will be different because of other factors, especially climate change, the effects of the pandemic and Brexit.

One intriguing question is whether we will move towards a mainstream culture that is less focused on consumption. Societies have always had subcultures that espouse minimalist consumption values, but there has been an emerging trend for people to reassess their life choices and priorities in recent years.

Soaring inflation, climate change (and climate shame) and the skills gained during lockdown could provide another push to shift such fringe attitudes into the mainstream. by Kate Bayliss
An extremely dry July has led to drought status being declared in many areas, while 3 billion… What You Need To Know About Inflation

by Nicholas Li
Inflation is one of the most pressing political and economic issues of the moment, but there are…