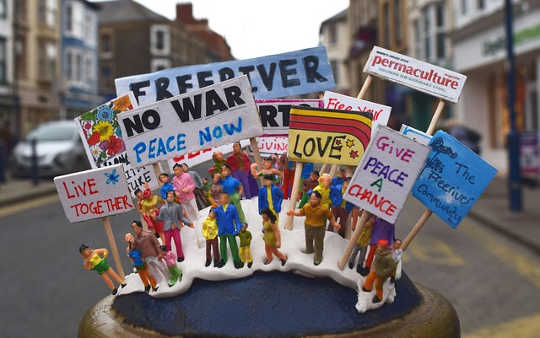 Violent protests can undercut public support for popular causes, according to new research inspired by recent confrontations between white nationalist protesters and anti-racist counter-protesters in Charlottesville, Virginia, and Berkeley, California.

“Our central finding is that even protesters who otherwise enjoy high levels of public support—anti-racist activists counter-protesting a gathering of white nationalists—can lose support from the general public if they use violence. In fact, we found that support for white nationalists was heightened among those who read that anti-racist counter-protesters had attacked them.”

Violent protests have become more common in the United States since the 2016 election, Willer says.

“There’s been rising diversity of protest tactics, including the use of violence. Given that people typically react very negatively to violence, my coauthors and I were curious about public reactions to violent protest. Are protesters who use violence turning off the general public, inadvertently making their opponents more credible?”

A fight to win public support

The survey was split into four conditions: Depending on the experiment, participants read one of four newspaper articles. While based on protests that took place in Charlottesville and Berkeley in August 2017, elements of the stories were fabricated for experimental control.

“…violent activism typically turns people off, including potential supporters, and…builds opposition to those who use it.”

In one scenario, participants read a news story about white nationalists who staged a protest of the removal of Confederate monuments. In the report, a group of anti-racists showed up to stage a counter-demonstration. It was made clear that neither group was violent. In the other three conditions, the article portrayed violence by one group or the other, or both.

Participants were then asked how they perceived the violence that occurred, as well as questions about their attitudes toward and support for the two groups.

However, when white nationalists were violent, it did not lead to increased support for anti-racist movements overall.

“We found that white nationalist protesters who used violence were not perceived as less reasonable and did not lose support, because they were already seen as extremely unreasonable and were strongly opposed,” Willer says.

“When compared to their anti-racist opponents who could lose support if they used violence, this highlights an interesting asymmetry in the likely consequences of violent protest.”

Because white nationalists are a widely despised group known for violence, they have little to lose if they can draw out violence from anti-racists.

“Violence did little, if any, damage to their reputations,” the researchers write. “Conversely, violence by anti-racists can not only damage public support for anti-racists; as our results show, it can also increase support for the white nationalist protesters themselves.”

Willer hopes that for activists concerned with popular support for their movement, the findings help them understand the value of making sure protests remain peaceful.

“It is important to acknowledge limitations of our work,” Willer says. “Violence cannot always be avoided, such as when it is used in self-defense. But our results do fit well with other work suggesting that violent activism typically turns people off, including potential supporters, and that it builds opposition to those who use it.

“If people understood clearly the effects of violent protest on public opinion, they might try harder to convince other activists on their side not to use these tactics.” To Beat The Winter Blues, Think Like A Norwegian

by Melissa De Witte
You might find inspiration for handling the dark months ahead from Norwegians, according to Kari… by Melissa De Witte
To understand why people succeed or fail, look at their circle of friends. Like it or not, says… by Melissa De Witte
At-home DNA testing kits may be popular, but new research finds that not everyone is eager to find… by Melissa De Witte
Elections play a distinctive role in strengthening democracy, and voting is a pivotal part of that…