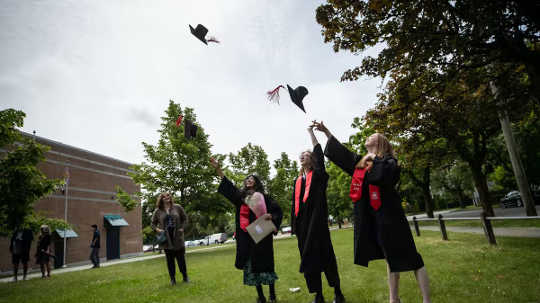 Students toss their caps into the air while posing for family photos after a graduation ceremony at a Vancouver high school in June 2020. THE CANADIAN PRESS/Darryl Dyck

A group of young people is suing the federal government, claiming that disenfranchisement of those under 18 is unconstitutional.

NDP MP Taylor Bachrach has introduced a private members bill to lower the voting age to 16. The first reading in the House of Commons was completed late last year.

A similar act (Bill S-201) to amend Canada’s minimum voting age from 18 to 16 is currently at second reading in the Senate. Sen. Marilou McPhedran introduced a similar bill in 2021 and it passed second reading. But the fall 2021 election put an end to that process.

Some municipal and provincial jurisdictions in Canada have considered lowering their voting age. So have other countries, including the United Kingdom, Australia and New Zealand.

Thirteen countries, ranging from Brazil to Nicaragua, Ecuador, Austria, Estonia and Malta, already have voting ages under 18. The Council of Europe has urged its member countries to follow suit.

In Canada, the federal NDP and Green Party publicly support a younger voting age. The federal Conservative, NDP and Liberal parties already allow members as young as 14 to vote in leadership contests.

Proponents of the bills in Parliament and the Senate, and the applicants to the Ontario Superior Court of Justice, hope to build on this momentum.

There are four main arguments for lowering the voting age:

Many of the key issues of today — like climate change, environmental degradation, the COVID-19 pandemic and social and racial justice — have serious consequences for young people, now and in the future.

Many leading Canadian and international environmental advocates are under the age of 18. Autumn Peltier, for example, was named Chief Water Commissioner for the Aniishnabek Nation at the age of 14 and addressed the United Nations General Assembly at age 13 and 15.

Children and young people have disproportionately experienced the education, health and economic consequences of the COVID-19 pandemic.

Many young people under the age of 18 are actively involved in social justice movements, including Black Lives Matter and Every Child Matters.

Under the UN’s Convention on the Rights of the Child — which is almost universally ratified — children have the right to participate in decisions that affect them.

Lowering the voting age is one way to provide a formal process for decision-making and accountability by elected representatives. In fact, the right to vote is a human right, protected by domestic and international law.

Lowering the age to a time when young people are enrolled in high school civics classes could increase formal political participation and strengthen democracy.

Despite the political consciousness and engagement of children and young people, there is still widespread apathy and declining participation among young adult voters.

Research across jurisdictions that have introduced under-18 voting indicates that the impact is “often positive in terms of political engagement and civic attitudes.”

3. Would align with other age minimums

The current voting age does not align with the minimum age of many other activities that require maturity and judgment, such as driving, consensual sex and paid work.

Most tellingly, the age of criminal responsibility in Canada is 12 under the Youth Criminal Justice Act.

If children as young as 12 are considered mature enough to be held criminally responsible for their actions, why can’t 16-year-olds vote?

If children can work and pay taxes, why don’t they have a say in how their taxes are spent?

Ageist assumptions against those under 18 mirror historically sexist and racist arguments to disenfranchise women and Indigenous people.

One such argument is that those under the age of 18 lack the cognitive, emotional and moral maturity to vote. However, psychological research suggests that young people have adult-level cognitive capacity by age 16.

Others argue that parents will influence their children’s voting behaviour. But some studies indicate that peers, rather than adults, have greater influence over political behaviour and socialization. Results from Student Vote Canada, while not representative, show different voting outcomes for the 2021 election among students versus the official results.

Some might argue that people under the age of 18 lack sufficient knowledge about policies and democracy to make informed decisions.

Voting rights in Canada have changed over time to become more inclusive. Challenging age discrimination in Canada’s election system could be the next step in expanding and strengthening our democracy.