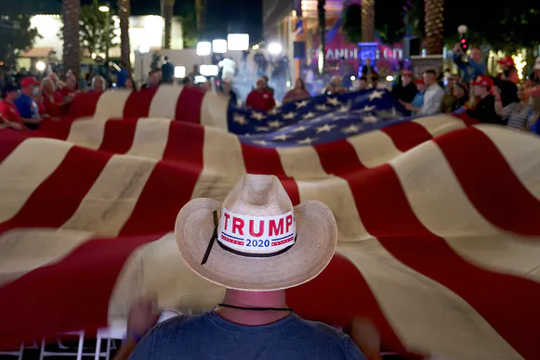 As a Canadian, I sit at the edge of my seat every election night in America.

Even though it is not my country, like many, I feel the magnitude of what’s at stake in a country increasingly divided over issues of race, gender, the economy and the coronavirus pandemic.

While this has been the narrative of the past four years, America has always been a nation divided. This division was thoroughly examined in the New York Times 1619 Project, which sought to reframe the country’s history by placing plantation slavery and the African American experience at the centre of American history.

Despite historical facts, what has made the Trump era unique in its divisiveness is the way in which his presidency has been marked by a stark failure to disavow white supremacy while discrediting African American attempts to reclaim their place in American history. He condemned the 1619 Project while paradoxically claiming that he has done “more for the African American community than any president with the exception of Abraham Lincoln.”

What was clear on election night is that Trump did better than pollsters predicted. Why was this race so close?

Trump and Biden could not be more different in terms of ideology. But when it comes to nostalgia, both candidates relied on a similar notion of returning America to a different time.

For Trump, “Make America Great Again” has not only functioned as a political slogan, it has also morphed into a battle cry for his followers who yearn for a past that has never existed.

Through repeated invocations, the slogan is not only a reference to the past but also a “structure of feeling” — a term cultural theorist Raymond Williams coined in the 1950s. The term describes the paradox between the reality of people’s lived experiences — with its intangible and undefined parts of cultural life — and the official, material and defined forms of society.

In other words, MAGA has nothing to do with policy — hence why Trump’s re-election campaign had undefined policy objectives — but everything to do with how and what his followers “feel” and think about MAGA.

If Journalists Want To Determine The Truth, Here's How Artificial Intelligence Can Help

Biden also has a brand of nostalgia and has played on the trope of an industrial America of yesteryear, where people work hard, love their families as they do their neighbours. It’s a place where “honest Joe” can acknowledge that some of the neo-liberal policies of the Democratic Party that he endorsed, including the 1994 crime bill, might have harmed African Americans — the very people whose votes he needed — but for which he, unlike Trump, is at least able to apologize and show some modicum of empathy.

Biden’s selling point, then, was that “at least” he cares. Was that enough to win over African Americans?

Even with Kamala Harris, a Black woman (who also identifies as South Asian) on the ticket, African Americans have been divided about her loyalty.

While Black women were excited about Biden’s pick, many Black men were not. That wasn’t because of policy decisions as a California senator, but because of her former job as California’s attorney general, and before that, as district attorney of San Francisco where, under her tenure, Black people made up less than eight per cent of the city’s population but accounted for more than 40 per cent of police arrests.

So unlike the narrative of community organizing and activism that was attached to Barack Obama during his 2008 presidential run, a narrative that seemed to supersede his work as a senator, Harris’s past has seemingly overshadowed her Senate work, even as her votes have been in aid of Black America.

The closeness of the 2020 election has much to do with the way in which both Trump and Biden have invoked an imagined past, a narrative that suggests America needs to perpetually look back instead of looking forward.

Obama’s 2008 slogans — “Change we can believe in” and the chant “Yes We Can” — were so powerful because they projected an air of possibility about the future, that things could improve and that voters had the power to make it happen.

Trump’s “Make America Great Again” and Biden’s “Battle for the Soul of America” have nothing to do with the voters or their ability to create a future; instead, both slogans send the same message — there was a time in America where things worked, where the nation was untainted by division, and that it must return to.

This act of forgetting reality by clinging to a fictive, golden-days past is reminiscent of the title-track of the 1973 film The Way We Were, starring Barbra Streisand and Robert Redford. The song, performed by Streisand, was a huge hit, No. 1 on the Billboard Year-End Hot 100 singles in 1974.

Most people don’t remember that Gladys Knight & The Pips also released an R&B cover of the same song in 1974. In the collective memory of The Way We Were, the song belongs to Streisand; it’s hard to even imagine anyone else singing that song. In other words, people forget details, but what gets remembered is the iconic. Streisand is an icon. (Knight’s an icon in her own right, but primarily among African Americans.)

Similarly, Trump is an iconic figure whose fan worship has managed to literally trump the Republican Party itself. He has convinced his loyal following to cling to the past because it was simpler then, and it gives people a chance to live out that simplicity — however fictional Democrats believe it to be — over and over again.

Our memories of the past do not matter; what matters in the Trump era is the rewriting of every line of actual historical fact. Biden has relied on empathy and sentiment to win back the presidency, to bring back a kind America with his numerous folksy “Bidenisms” while Trump has done what nobody thought was possible — he has confused the citizenry to the point where many likely can’t remember what the U.S. was like before 2016.

While Trump likes to evoke Lincoln’s name, it was Lincoln who famously said: “A house divided against itself cannot stand.”

America is divided. But the question is, when the dust clears and the ballots are all counted, will it still aspire to become the nation it so desperately tells itself (and the world) that it can be? by Paulo Coelho
There was once a businessman who was sitting by the beach in a small Brazilian village. As he sat,…

by Steve Taylor
On May 22 2017, my home city of Manchester suffered a terrorist attack killing 22 people and…