Why We Should Care About The Lasting Effect Of Racist Rhetoric 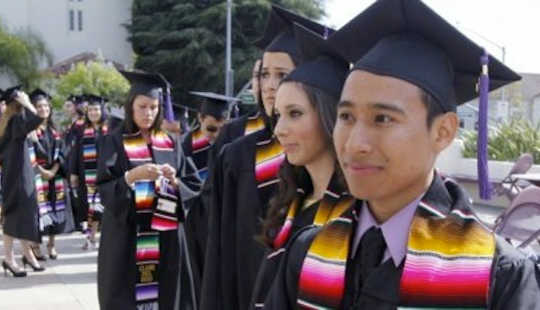 Luis is an upper-middle-class American-born Latino.

When I interviewed him in 2008, he told me he had spent long hours, and a substantial amount of money, restoring a classic Chevy truck. One day, clad in grease-stained work clothes, Luis decided to take the truck for a test drive around his affluent neighborhood. As he cruised past his neighbors' large homes, his truck broke down. He got out to tinker with the engine. As he did, the police arrived.

The officer claimed to be responding to a call from a neighbor who anxiously relayed that an unauthorized Mexican immigrant in an old truck was casing the neighborhood.

Stories like Luis' are not uncommon. And they shouldn’t be laughed off. These racist conventions are dangerous for American society because they prevail and unfold in communities and institutions, like schools and the workplace, that are becoming increasingly racially diverse.

Data and research, including my own work on the Latino middle and upper class, contradict the stereotype that Latinos are overwhelmingly unauthorized, are criminals and are unable to assimilate.

It also suggests these stereotypes have consequences for the mobility of young Latinos, a growing segment of our population whose integration is critical to the social, political and economic vitality of the United States.

This year’s election has only added to the problem.

According to Donald Trump,

The Mexican government is forcing their most unwanted people into the United States. They are, in many cases, criminals, drug dealers, rapists, etc.

Contrary to what you hear on the campaign trail, Mexican immigration to the U.S. has fallen below zero. A recent Pew Report finds that between 2009 and 2014, more Mexicans left the U.S. than entered. Latino population growth in the U.S. is now being driven by births, not immigration. In fact, the majority of Latinos in America are not immigrants. Nearly two-thirds of Latinos in the U.S. were born in America.

The youth of this population means that they are a demographic critical to all aspects of our economy and civil society. As the white population ages and baby boomers exit high-skilled jobs en masse, Latino youth are poised to sustain our economic, social and civic institutions. They will be going to college and filling the jobs the baby boomers depart. They will pay taxes, contribute to Social Security, start businesses, begin families, buy homes and vote.

Nearly half of all eligible Latino voters are millennials. They are the main drivers of growth among Latino eligible voters.

The presence of young Latinos is also evident in America’s educational institutions. Latinos make up nearly one-quarter of the children enrolled in public schools, and they comprise a growing share of students on college campuses.

Although Latinos still lag behind other groups in earning a college degree and educational barriers are substantial, the Latino high school dropout rate has reached a record low. The number of Latinos ages 18 to 24 in college increased by 201 percent between 1993 and 2013. During the same period, college enrollment increased 78 percent among blacks and 14 percent among whites.

The majority of these young Latinos have at least one immigrant parent, and many are the first in their families to enter college. My research on socially mobile middle- and upper-class Latinos, and that of others, demonstrates the challenges that they will likely confront as they navigate an environment where nativist rhetoric at the national level hardens racial and ethnic boundaries at the local level and plays out via implicit and explicit bias and institutional racism.

The middle-class Latinos I have studied have college degrees, they work in professional occupations or own successful businesses. They make incomes well above the national median income of US$51,939. Some Latinos have even entered into the top one percent of income earners. Los Angeles is a case in point, where seven percent of people in the top one percent of income earners – those making a total personal income of $421,000 or more – are Latino.

Despite their accomplishments, some middle- and upper-class Latinos report having to constantly deflect the criminal, unauthorized and immigrant labels, leading them to question whether they belong in prestigious educational institutions or the white-collar workforce. Consistent with the disparaging stereotype bolstered by Trump, they may be viewed as dangerous criminals – as Luis' case demonstrates – or low-skilled immigrant workers, even though they are American-born and economically successful.

As part of my study of middle- and upper-class business owners, I interviewed Richard Ruiz, owner of a successful investment banking firm. He relayed an incident at a networking event where a fellow attendee asked him, “Oh, can you bring me a water?”

Others shared experiences where they were mistaken for table bussers when dining at restaurants or valets when waiting for their cars on the curbs of swanky restaurants.

My respondents also face a glass ceiling in both corporate America and in business, where some report being passed over for promotions, jobs or business opportunities, despite being extremely qualified.

Trump’s inflammatory rhetoric is already materializing in an institution that is crucial for the mobility of Latino youth: schools. His campaign is emboldening some to bully and harass students of color. Racist chants like “Donald Trump, build that wall” are being hurled at Latino and black athletes.

On college campuses around the country, Trump’s supporters are “chalkening” racist messages like “Build the wall, deport them all.”

Integration is a two-way street. As a recent report by the National Academy of Sciences on immigrant integration emphasizes:

The process of integration depends upon the participation of immigrants and their descendants in major social institutions such as schools and the labor market, as well as their social acceptance by other Americans.

As young Latinos increasingly enter America’s core social institutions, like schools and the labor market, and as they represent a burgeoning share of Latino eligible voters, a strong message is being sent that they do not belong. Politicians can hold up their end of the integration obligation by conveying that the growing population of young Latinos is essential to our collective future. Why We're All In This Together

by Charles Eisenstein
Normal is coming unhinged. For the last eight years it has been possible for most people (at least…

by Robert Jennings, InnerSelf.com
The opioid crisis in the US is a near perfect example why the current push for unregulated free…