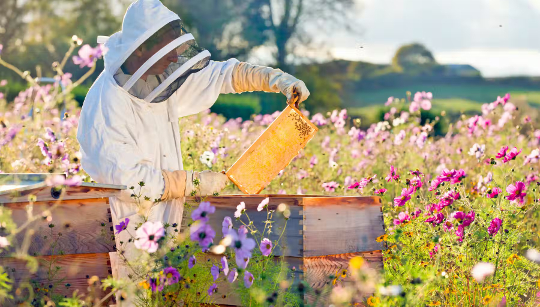 . We couldn’t do without bees. Juice Flair/Shutterstock

A new paper shows how the lifespan of the adult honeybee appears to have shrunk by nearly 50% in the past 50 years. The European Red List for Bees suggests nearly one in ten species of wild bees are facing extinction. Imagine how we would react if human lifespans halved. The equivalent would be if the average woman in the UK was living to 41 instead of 82 years old.

Our future is intertwined with bees. Without bees and other pollinators, we cannot grow the majority of crops we depend on for food.

This research could help explain the high levels of bee colony deaths around the world over the past few decades. Bee deaths were particularly severe in the USA in the winter of 2006-7, when some commercial beekeepers lost 90% of their colonies.

Unexplained high rates of bee colony deaths have also been reported in Canada, Australia, Belgium, France, the Netherlands, Greece, Italy, Portugal, Spain, Switzerland, Germany, Finland and Poland. In the cold winter of 2012-13, 29% of honeybee colonies in the UK died.

The authors, Anthony Nearman and Dennis van Engelsdorp from University of Maryland, used mathematical modelling to show lower bee life expectancy could lead to mass colony death. According to their study, since 1969, honeybee life span in the US has dropped from a median of 34 days to just 18 days.

The authors studied worker bees removed from hives and kept in cages, not wild bees, which may have affected their results. But if not, something really worrying is going on

The authors believe modern honeybees may be suffering from higher prevalence of disease such as deformed wing virus, which has become more common since its discovery 40 years ago, due to the global spread of its vector, the varroa mite. Modern bees may be weakened by new generations of pesticides that did not exist 50 years ago.

Often the pollen that bees feed to their larvae is contaminated with pesticides. This could be making matters worse because bees exposed to low doses of a highly toxic group of pesticides called neonicotinoids have reduced resistance to disease.

Another explanation the authors offer is that bee genes may have changed. Honeybee lifespan is linked to their genes. Artificial (by beekeepers) or natural selection may favour bees with shorter lifespans. Scientists are seeing this happen in other species. For example cod now mature earlier and when they are smaller in size because overfishing means fish rarely survive long enough to grow large.

Perhaps stressors in the modern world, such as pesticides and disease, mean honeybees rarely survive for a long time. So their evolution might favour a live-fast-die-young lifestyle.

Bees are already facing many pressures on their survival. A separate study by the University of Bristol, released in November 2022, found that fertilisers are altering plants’ electric field which is changing the way bees sense flowers. It is putting them off from visiting flowers. And bee habitat is disappearing. Since the 1930s, 97% of wildflower meadows have been lost in the UK as farming has intensified.

Fascinating though it is, this new study raises more questions than it answers (as good science usually does). The data is based on groups of worker bees kept in cages. This method is often used to study the effects of stressors (such as pesticides) on bees.

In these sorts of experiments, researchers would normally set up control groups at the same time and under identical conditions. Nearman and van Engelsdorp used the historical data from control groups in many such studies carried out around the USA since 1969. As the authors acknowledge, this is a weakness in their report.

They can’t guarantee that lab conditions have stayed the same since 1969. Perhaps older studies tended to use wooden cages and modern ones use plastic. Cage sizes may become smaller or larger. The ariflow in modern incubators may now be faster – or slower. Such details are rarely noted. Anything that changed over the past 50 years could explain the reduction in longevity.

It won’t be easy for scientists to unravel the study’s findings. But if we could find historical data on wild honeybee longevity from previous decades, we could compare them with measurements from today’s world. This would help scientists rule out the possibility that the study’s results were affected by lab conditions.

Reduced bee life expectancy means reduced pollination. Bees and other pollinating insects are essential to a good harvest for 75% of the crops we grow worldwide. They also pollinate about 80% of all wild plants. All species of bees face similar challenges to honeybees, but we do not know if their life expectancy has changed. If bees are really living for less time in the wild, we need to know why. by Jessica Corbett
"The damage caused by 3M, DuPont, and other manufacturers of PFAS is nothing short of staggering,…