Will Supreme Court Decision On Abortion Topple Other Rights? 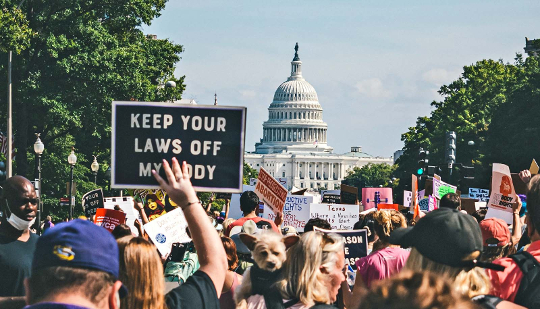 "In addition to these legal avenues, a great deal of energy will need to be devoted to helping people who need safe abortions get access to them, either through the support of abortion funds or other support networks," says Rachel Barkow. (Credit: Gayatri Malhotra/Unsplash)

Only the first domino to fall among rights that Americans enjoy, legal experts say.

The Supreme Court’s June 24 decision in Dobbs v. Jackson Women’s Health marked the end of the constitutional right to an abortion. A 5-4 vote overturned the landmark 1973 Roe v. Wade decision, leaving individual states to determine the legality of abortion.

The majority opinion—which was leaked in Justice Samuel Alito’s draft opinion in May—asserts that Roe v. Wade “was egregiously wrong from the start” and “is not deeply rooted in the nation’s history and traditions.” Roe’s reversal is undoubtedly a monumental moment in Supreme Court history, but does it portend the loss of other rights, as well?

In overturning Roe v. Wade, the Supreme Court has eliminated abortion as a right protected under the US constitution. What are the implications for Americans’ other constitutional rights?

Rachel Barkow: First, I want to emphasize that I think it’s important to stay focused on the implications of Dobbs itself before turning to the other possible rights at risk. Overruling the right to have an abortion is a cataclysmic change that will harm millions.

It is also true that the logic of the opinion calls into question other rights that rest on the right to privacy, including the right to contraceptives and same sex marriage. Justice Alito tries to dismiss this risk by noting that “nothing in this opinion should be understood to cast doubt upon precedents that do not concern abortion,” but that’s a hollow source of protection. As the dissent notes, “No one should be confident that this majority is done with its work.” And Justice Thomas explicitly says as much in his concurrence—he would reconsider all the precedent that rests on substantive due process.

Peggy Cooper Davis: Some rights that may be at risk are contraception access, parental authority, for example, medical, educational matters, parental custody rights, and choices about medical treatment or termination thereof, and marriage choice. These are just a few examples.

Barry Friedman: The Supreme Court is claiming this decision relates to abortion and won’t impact other rights—but one is entitled to be skeptical, especially from justices who claimed greater fealty to Roe’s status as a precedent during confirmation hearings. This is a radical court with a radical agenda that we have not yet seen unfold fully.

Justice Clarence Thomas’ concurring opinion suggests the Supreme Court should also revisit and overrule landmark decisions protecting the rights to obtain contraception, as well as same-sex intimacy and same-sex marriage. Thomas notes that the court could do this by eliminating “substantive due process,” which protects constitutional liberties from government interference. Has this doctrine been threatened before? What is the likelihood of it being eliminated?

Rachel Barkow: I think this is the gravest threat we’ve seen to this line of authority. The Thomas concurrence is basically a “shout-out” to conservative activists to start bringing these challenges to the Supreme Court, and the majority opinion has all the seeds for the destruction of these rights. If they were willing to destroy a 50-year-old precedent that had been the subject of their confirmation hearings—hearings in which they duplicitously pledged to respect precedent—there is little comfort that any of these other rights are safe. It all depends on how far these justices are willing to go. As a matter of legal logic, they are now all vulnerable under Dobbs.

Justice Thomas has rejected this approach for many years now. But the fellow travelers who will take up his invitation on the basis of Dobbs to challenge the court’s gay rights jurisprudence are being opportunistic. For them, it is not about substantive due process but the particular rights that the court has recognized. We can see this because of how selective the attack is. So, for example, it is through substantive due process that the Bill of Rights’ guarantees against the federal government are made valid against the states. This is called incorporation. But even though incorporation is a substantive due process doctrine, you do not see many critiquing it.

Will people in states which outlaw abortion be able to travel across state lines to have the procedure legally? What threats might people crossing state lines for an abortion face?

Rachel Barkow: We will have to see whether states seek to criminalize women crossing state lines for abortions and then, if they do, whether the Supreme Court will permit it. Justice Kavanaugh wrote separately to say that could not be criminalized under the right to travel, but that was dicta. We will have to see how that plays out among the full court if a case is actually litigated.

Peggy Cooper Davis: Some states are prepared to prohibit this or to make the act punishable upon return. However, the legal/constitutional legitimacy of this is untested as far as I know.

Barry Friedman: Some state officials have threatened to take action against women who travel for abortions. Prior to this point that might have seemed unthinkable as a constitutional matter, but it is hard to know what the current Supreme Court would say.

Many Americans are wondering: what now?

Rachel Barkow: I think it’s important not to let despair or anger turn to hopelessness. The anti-choice movement spent 50 years pushing for this movement, and they never gave up even when it looked like the odds against them were impossible to beat. The pro-choice movement needs the same resolve. One strategy is to follow the anti-choice model and seek to change court personnel until Dobbs is overruled and Roe is once again the law of the land. But given the age of the justices, that will be a long game, unless there are unforeseen changes to the court’s size, which seem unlikely given what President Biden and the Senate Democrats have said. So that means the action will be in Congress and in the states—in state legislatures and state courts, seeking constitutional protection under state constitutions. Hopefully this will get people to see how important the selection of state high court judges is and will get them more involved in state-level politics as well.

In addition to these legal avenues, a great deal of energy will need to be devoted to helping people who need safe abortions get access to them, either through the support of abortion funds or other support networks.

Noah Rosenblum: I think we need to think about this in the short term and the long term. In the short term, those of us committed to sex equality and the protection of access to abortion will need to think about how we can use the tools we have, including, as Rachel said, state law and state courts, to make good on those commitments. I also think we should prepare for greater legal conflict, both between the states and between the branches of government, than we have seen in many years, as has happened at other moments of intense social and political disagreement in American history.

In the longer term, we need to recognize that Dobbs was the result of a systematic effort by the conservative legal movement to build and exercise power, both judicial and political. We have to think about how to build and exercise a countervailing power. I see much promise in the fact that many of the positions pushed by the conservative legal movement have only ever enjoyed the support of a minority of Americans. Meanwhile, large majorities of Americans continue even now to disapprove of the government interfering in the decisions a woman makes about her pregnancy. There is a political constituency here to be organized and brought to power that could change the country’s direction again. by Brett Wilkins
In the richest country on Earth, the time is long overdue for us to create a government and an… by Danielle Hitch, Deakin University ,et al
Disadvantaged communities not only suffer disproportionately from COVID, they are even more likely…