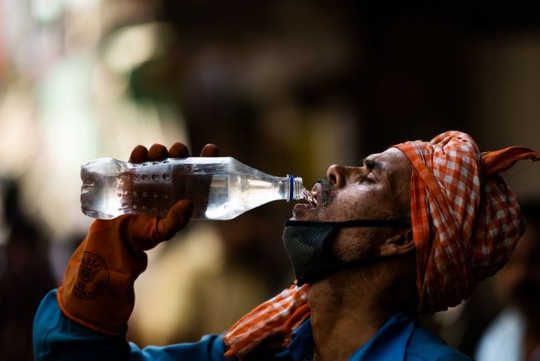 Fossil fuels did this, said one climate justice campaigner. Unless we ditch fossil fuels immediately in favor of a just, renewable-energy based system, heatwaves like this one will continue to become more intense and more frequent.

As record-breaking temperatures continue to pummel the Indian subcontinent—endangering the lives of millions of people and scorching crops amid a global food crisis—climate scientists and activists are warning that deadly public health crises of this sort will only grow worse as long as societies keep burning fossil fuels.

"This heatwave is definitely unprecedented," Chandni Singh, senior researcher at the Indian Institute for Human Settlements and a lead author at the Intergovernmental Panel on Climate Change (IPCC), told CNN on Monday. "We have seen a change in its intensity, its arrival time, and duration."

Although heatwaves are common in India, especially in May and June, overpowering temperatures arrived several weeks earlier than usual this year—a clear manifestation of the fossil fuel-driven climate emergency, according to Clare Nullis, an official at the World Meteorological Organization.

The average maximum temperature for northwest and central India in April was the highest since records began 122 years ago, reaching 35.9º and 37.78ºC (96.62º and 100ºF) respectively, according to the Indian Meteorological Department (IMD).

Last month, New Delhi saw seven consecutive days over 40ºC (104ºF), three degrees above the average temperature for the month of April, according to CNN meteorologists. In some states, the heat closed schools, damaged crops, and put pressure on energy supplies, as officials warned residents to remain indoors and keep hydrated.

The heatwave has also been felt by India's neighbor Pakistan, where the cities of Jacobabad and Sibi in the country's southeastern Sindh province recorded highs of 47ºC (116.6ºF) on Friday, according to data shared with CNN by Pakistan's Meteorological Department (PMD). According to the PMD, this was the highest temperature recorded in any city in the Northern Hemisphere on that day.

"This is the first time in decades that Pakistan is experiencing what many call a 'spring-less year," Pakistan's Minister of Climate Change, Sherry Rehman said in a statement.

April's record-shattering temperatures came on the heels of India's hottest March in more than a century and one of its driest. Meanwhile, the region's annual monsoon season is still weeks away.

"This is what climate experts predicted and it will have cascading impacts on health," said Singh. "This heatwave is testing the limits of human survivability."

In a statement released late last week, Shibaya Raha, a senior digital organizer with 350.org South Asia, said that "we cannot deny this climate crisis any longer. We are experiencing heatwaves in spring."

"The heat is unbearable and people are suffering," Raha continued. "Many in heavily populated areas do not have access to air conditioning, and workers with outdoor jobs are unable to carry out their work in this extreme heat, impacting sources of income."

Land surface temperatures—a measure of how hot the Earth's surface would feel to the touch in a particular location—exceeded 60ºC or 140ºF in parts of northwest India on Saturday, according to satellite imagery.

In addition to putting the lives of millions of farmers at risk, extreme heat is wreaking havoc on wheat fields. Gurvinder Singh, director of agriculture in the northern state of Punjab, known as "India's breadbasket," told CNN that the April heatwave reduced yields by 500 kilograms per hectare.

"The IPCC report predicts significant increases in heatwaves globally, but we are the human faces of that science," said Raha. "It looks daunting on paper but is even more devastating in reality and we demand immediate climate action."

Namrata Chowdhary, chief of public engagement at 350.org, stressed that "the truth behind these heatwaves is searingly clear: fossil fuels did this."

"While these temperatures are quite literally shocking, they come as no real surprise to communities that have long since lived on the frontlines of the climate crisis," Chowdhary continued. "This is the latest spike in a rapidly worsening disaster, one that was foretold by climate activists the world over."

"The IPCC report had already predicted that this densely populated region, where the vulnerabilities of over a billion people are compounded by power outages and lack of access to water, will be one of the worst affected by climate impacts," said Chowdhary.

Zeke Hausfather, a climate scientist and previous IPCC contributor, pointed out last week that the current heatwave is occurring in the context of 1ºC and 1.2ºC of warming in India and Pakistan, respectively.

The United Nations warned last year that even if governments around the world fulfill their current greenhouse gas-reduction pledges—few of which are backed by legislation or dedicated funding—the planet is whirling toward a "catastrophic" global temperature rise of 2.7ºC by 2100.

Based on the world's current emissions trajectory, India and Pakistan are expected to experience 3.5ºC of warming by century's end, according to country-level projections from researchers at Berkeley Earth.

"Unless we ditch fossil fuels immediately in favor of a just, renewable-energy based system," said Chowdhary, "heatwaves like this one will continue to become more intense and more frequent."

Raha added that "governments can no longer approve fossil fuel projects, and financial institutions can no longer fund them, without our suffering on their hands." by Rene Van Acker, University of Guelph et al
Globally, about one-third of all greenhouse gas emissions come from agriculture and food systems.… Bad News For The 2022 Hurricane Season

by Nick Shay, University of Miami
When the Loop Current reaches this far north this early in the hurricane season – especially during… by Caitlin Grady and Lauren Dennis, Penn State
The water in Lake Powell, one of the nation’s largest reservoirs, has fallen so low amid the… by Molly Hunter, University of Arizona
Now, the Southwest is seeing more fires start much earlier in the year. The earlier fire season is… by Mark Diesendorf, UNSW Sydney
Many climate activists, scientists, engineers and politicians are trying to reassure us the climate…