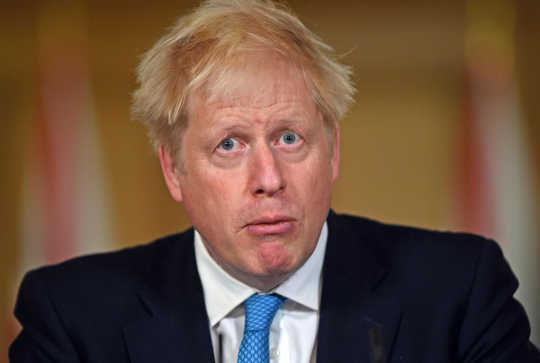 A seemingly endless cycle of scandals has come to define Boris Johnson’s time as prime minister. This has peaked in recent months with the revelations about lockdown parties in Downing Street and Johnson being fined by police for his attendance.

Beyond tainting Johnson’s personal legacy – a recent poll found 54% of Britons thought he should resign after being fined – the scandals have consequences for Conservative party prospects in the upcoming local government elections in May and the Wakefield byelection. It is also possible that the effects will endure until the next general election.

Our ongoing research shows that when trust in the prime minister falls, it leads to declining trust in other political institutions. In other words, the fish rots from the head – bad behaviour by the government erodes our faith in democracy overall.

In early 2021, we conducted a nationwide survey of 3,000 individuals in Great Britain, focusing primarily on public reactions to the pandemic. It included questions about public trust in government, Parliament and political parties. The data was collected well before the partygate scandal, so the responses are not affected by temporary blips in public opinion caused by these revelations.

The responses give us insight into the relationship between trust in government and the behaviour of political leaders at a time when the Conservatives were relatively popular and ahead of Labour in voting intentions by 7%.

We asked respondents to indicate the extent to which they trust institutions using a scale of zero to ten, where zero meant that they had no trust at all, and ten meant that they trusted it completely. The average trust score on this scale for the UK government was 4.8, with some 56% of respondents scoring between zero and five, and nearly 13% stating that they did not trust the government at all. On the other side of the scale, just over 3% said that that they trusted it completely with a score of ten. The most common choice was a trust score of five. 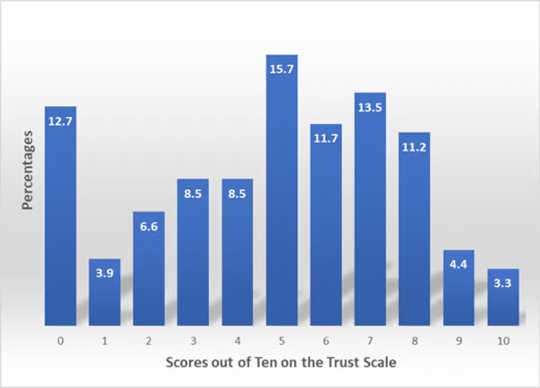 How survey participants rated their level of trust in the government, on a scale from zero (no trust at all) to ten (trust it completely). Author provided, Author provided 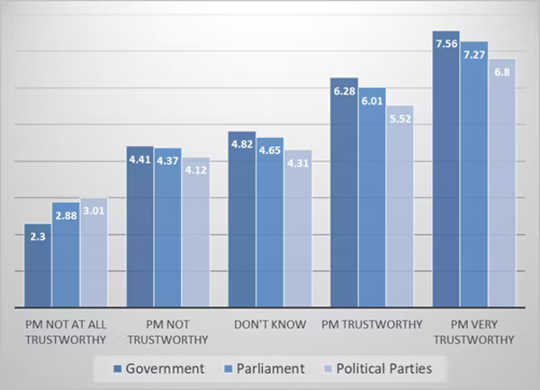 People who said they found Prime Minister Boris Johnson to be not at all trustworthy also had low levels of trust in the government, Parliament and political parties. Author provided, Author provided

The survey suggests that bad behaviour by our prime minister serves to undermine trust in the key institutions underpinning democracy. Since 27% of respondents said that the prime minister was “not at all trustworthy” and only 11% thought he was “very trustworthy”, the overall effect appears to be a weakening in the public’s faith in British democracy. If this is the case, it is likely to have a knock-on effect by deterring participation in political activities such as voting in elections.

We repeated the exercise for Labour leader Keir Starmer to see what effects the leader of the opposition’s ratings had on trust in institutions. In his case, some 15% thought that he was “not at all trustworthy”, while 13% thought he was “very trustworthy”.

This implications of this will require another survey to explore. If the prime minister keeps on defying public opinion by staying in office after becoming the first premier in British history to be found guilty of an offence, the foundations of democracy in Britain could continue to erode. by Agata Mirowska, Raymond B. Chiu and Rick Hackett
Although populist movements have been around a long time, there has been considerable interest in… Can Americans Be Shielded From A Political U.S. Supreme Court?

by Matthew Lebo, Western University and Ellen Key, Appalachian State University
Five out of the nine justices on the court this term were appointed by men who became president… by Ryan Neville-Shepard, University of Arkansas and Casey Ryan Kelly, University of Nebraska
We have also examined the ways that racial appeals to white voters have evolved under the GOP’s…