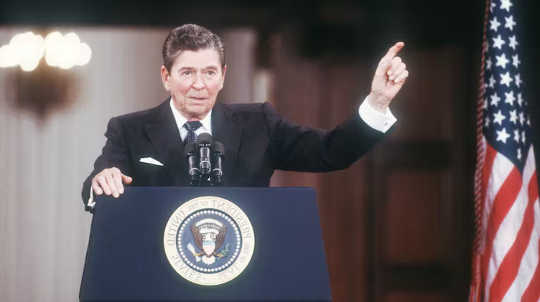 President Ronald Reagan, shown here speaking in Moscow in 1980, was an early adopter of neoliberalism in the U.S. Dirck Halstead/Liaison

Neoliberalism is a complex concept that many people use – and overuse – in different and often conflicting ways.

When discussing neoliberalism with my students at the University of Southern California, I explain the phenomenon’s origins in political thought, its ambitious claims of promoting liberty and its problematic global track record.

According to the progressive journalist Robert Kuttner, the “basic argument of neoliberalism can fit on a bumper sticker. Markets work; governments don’t.”

From such a perspective, government represents bureaucratic bloat and political imposition. Government is wasteful. The verve of capitalism, along with a limited democratic politics, is neoliberalism’s balm for all that ails humankind.

Completing his bumper-sticker mantra, Kuttner continues, “there are two corollaries: Markets embody human freedom. And with markets, people basically get what they deserve; to alter market outcomes is to spoil the poor and punish the productive.”

The moniker “neoliberalism” was coined by Austrian economists Friedrich von Hayek and Ludwig Von Mises in 1938. Each elaborated his own version of the notion in 1944 books: “The Road to Serfdom” and “Bureaucracy,” respectively.

Neoliberalism ran contrary to the prevailing economic strategies promoted by John Maynard Keynes, which encourage governments to stimulate economic demand. It was the opposite of big-government socialism, whether in its Soviet manifestation or its European Social Democratic version. Neoliberalism’s proponents embraced classical liberal principles such as laissez-faire – the policy of not intervening in markets.

By the 1970s, Keynesian policies were faltering. Hayek’s organization, the Mont Pelerin Society, had drawn wealthy European and American benefactors to its ranks and funded powerful think tanks such as the American Enterprise Institute and the Cato Institute. These groups refined neoliberalism’s message, making it a viable and attractive ideology.

By the 1980s, neoliberalism had gained ascendancy with Republicans such as president Ronald Reagan. High-ranking officials in the Democratic presidential administrations of Jimmy Carter and, later, Bill Clinton also embraced neoliberalism.

Neoliberalism was also championed by conservatives like British Prime Minister Margaret Thatcher and by international institutions such as the World Bank and International Monetary Fund.

But deregulating free markets had some unfortunate political consequences. It promoted financial and labor crises in the U.S. and U.K. and exacerbated poverty and political instability. The crisis was felt from the Global South to the U.S. Northwest, manifesting in the anti-World Trade Organization protests often referred to as the “The Battle of Seattle.” To critics like Frantz Fanon and David Harvey, neoliberalism is more akin to neoimperialism or neocolonialism. Basically, they contend, it achieves old ends – exploiting the global working class – through new means.

An extreme example of this was Hayek’s support of the repressive Pinochet regime in Chile. Augusto Pinochet toppled the popular socialist government of Salvador Allende in 1973. Pinochet was cautiously welcomed by the Nixon administration and looked upon favorably by both Reagan and Thatcher. In their view, Pinochet’s commitment to neoliberalism trumped his anti-democratic character.

This history helps explain the election last year of Gabriel Boric, Chile’s 36-year-old president. Boric ran on an agenda for profound change following a period of turmoil over Pinochet-era policies. His campaign slogan was “If Chile was the cradle of neoliberalism, it will also be its grave.”

Beginning in the 1980s and for a long time after, neoliberalism for many Americans conjured individual liberty, consumer sovereignty and corporate efficiency. Many Democrats and Republicans alike championed it to justify their policies and attract voters.

But, in my opinion, that was only the popular façade of a deeply flawed ideology.

One need only consider the consequences of U.S. bank deregulation after the global financial crisis of 2008 to see what happens when government allows markets to run themselves. Key American economic indicators like class inequality also tell the grim story of unchecked markets.

For many Americans, however, the mythology of individual liberty remains strong. U.S. politicians who hint of curtailing it – by, say, proposing more regulations or increased social expenditures – are often branded “socialist.”

Ultimately, neoliberalism was a child of its time. It’s a grand narrative born of the Cold War era, claiming to have the solution to society’s ills through the power of capitalist markets and government deregulation.

There is no shortage of articles showing that it has not delivered on its promise. Arguably, it has made matters worse. by Ori Freiman
In recent years, we have witnessed a growing interest in the idea of central bank digital… Why A Eurozone Economic Crisis Looks Like A Possibility

by Muhammad Ali Nasir, University of Leeds
The European Central Bank (ECB) has confirmed speculation that it will become the latest central… Time To Rethink As Fertilizer Prices Are Soaring

by Kathleen Merrigan, Arizona State University
Farmers are coping with a fertilizer crisis brought on by soaring fossil fuel prices and industry… The Use Of Deepfakes Can Sow Doubt, Creating Confusion And Distrust In Viewers

by Sze-Fung Lee and Benjamin C. M. Fung, McGill University
A manipulated video of Ukrainian President Volodymyr Zelenskyy was ciruclated. In it, a digitally… by Jeffery S. Bredthauer, University of Nebraska Omaha
The Federal Reserve has begun its most challenging inflation-fighting campaign in four decades. And…