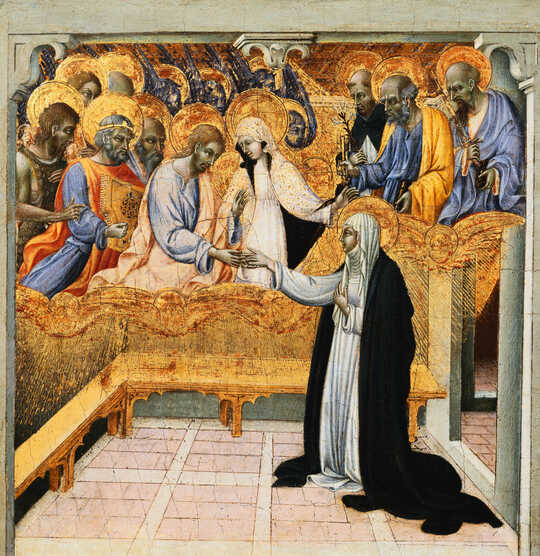 Communion has been described as the 'fount and apex of the whole Christian life.' Geoffrey Clements/Corbis/VCG via Getty Images

The biannual U.S. Catholic bishops’ meeting received more than its usual attention in June 2021 due to one particular item on its agenda: a proposed document on the Sacrament of the Eucharist, a ritual also known as Holy Communion.

Because this as yet unwritten document is expected to include guidance on when and whether Holy Communion may be refused to a Catholic who presents her or himself in a manifest state of serious sin, this church matter received note in the pages of national newspapers. It also prompted a “Statement of Principles” from 60 Democratic Catholics in the U.S. House of Representatives urging bishops “to not move forward and deny this most holy of all sacraments.”

As a scholar of Catholic sacramental theology, let me offer some thoughts on the central role of Holy Communion in the Catholic Church, and the pain it can cause some members to be denied reception of it.

One of the seven sacraments of the Catholic Church, the Eucharist is a ritual in which, according to Catholic theology, bread and wine blessed by a priest really become the body, blood, soul and divinity of Jesus Christ. Such is its central role in Catholicism, it has been called the “fount and apex of the whole Christian life.”

Catholics are obliged to receive Communion at least once a year, but in practice many do so far more frequently during Mass, or Catholic public worship.

Why might Catholics be concerned with lacking access to this one practice when there are presumably many other opportunities for spiritual growth both within and without the Catholic Church?

The answer lies not only in a sense of injustice about being denied access or forcing a change of habit. It is found in the history, practice and theology of Holy Communion itself.

In the formative years of Christianity around 2,000 years ago, the practice of ritual meals was already common in both Jewish and Greco-Roman culture. Early Christian Eucharistic practice took seriously the ritual power of a meal to transport participants beyond the physical world by connecting them to both past events and spiritual realities.

Jesus shared many meals throughout his time on Earth, culminating in his “last supper,” during which, according to biblical passages, he instructed followers to share bread and wine, saying, “This is my body that is for you. Do this in remembrance of me.”

Early followers of Jesus worshiped in synagogues and continued to take part in Jewish rituals. Thus, the Eucharist flowed from the same stream as the Passover Seder in which Jewish tradition says each person is to regard him or herself as having been personally freed from slavery in Egypt.

Yet, Christian ritual meals were unique because they were centered on Jesus, a crucified victim of the Roman Empire, whom, Christians believe, “passed over” death to be resurrected by God.

The whole structure of the Mass, which normally culminates in reception of Communion, is about thrusting participants into the life, death and resurrection of Jesus, so that they may see the death-and-resurrection shape of life in the world.

Catholic theology distinguishes three ways of speaking of the body of Christ, all rooted in the Bible: There is the historical Jesus who walked on Earth, the body of Christ that is present in the bread and wine of the Eucharist, and finally the assembly of people who, as St. Paul the apostle put it, “are the body of Christ and individually members of it.”

The early Christian celebration of, and reflection on, the Eucharist did not imagine a sharp divide between the presence of Christ in the Eucharist and in the people who celebrate it.

In its most basic terms, Catholics receive the really-present Christ in Communion so that they may be Christ in the world.

Catholics believe that when one consumes the Eucharist, one is incorporated into Christ and becomes bonded to others who are also part of the body of Christ on Earth. It is not simply a matter of individual belief, but of Church unity and the mission of being Christ in the world.

To set oneself outside of the practice of Communion – or to be set outside by another – is to be apart from the very practice that incorporates one into the body of Christ.