The Truth About St. Patrick's Day 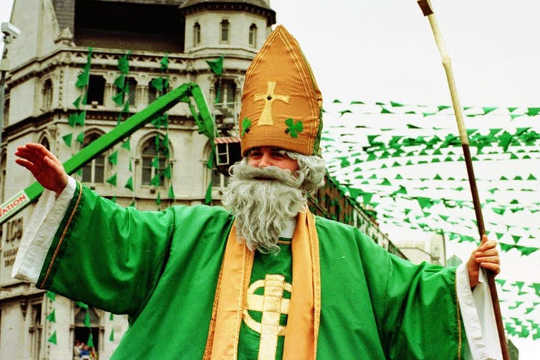 A man dressed as Saint Patrick blesses the crowd in Dublin as the parade makes its way through the Irish capital in 1998. AP Photo/John Cogill

In 1997, my students and I traveled to Croagh Patrick, a mountain in County Mayo, as part of a study abroad program course on Irish literature I was teaching for the University of Dayton. I wanted my students to visit the place where, each July, thousands of pilgrims pay homage to St. Patrick, who, according to lore, fasted and prayed on the summit for 40 days.

While there, our tour guide relayed the story of how St. Patrick, as he lay on his death bed on March 17 in A.D. 461, supposedly asked those gathered around him to toast his heavenly journey with a “wee drop of whiskey” to ease their pain.

The mention of whiskey left me wondering if St. Patrick may have unintentionally influenced the way most of the world celebrates the holiday today: by drinking.

The legend of St. Patrick

Because historical details about St. Patrick’s life remain shrouded in speculation, scholars are often stymied in their attempts to separate fact from legend.

In his spiritual memoir, “Confessio,” St. Patrick describes how he was brought to Ireland as a slave. He eventually escaped, rejoining his family in Britain, probably Scotland. But while there, he had a recurring dream, in which the “Voice of the Irish” called to him to return to Ireland in order to baptize and minister to them. So he did. 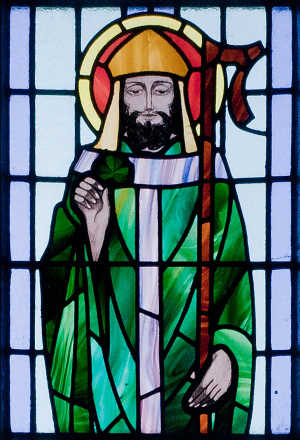 The Irish revere the account of this dream described in the “Confessio”; they accept the simplicity and fervor of his words and feel a debt of gratitude for his unselfish commitment to their spiritual well-being.

St. Patrick’s efforts to convert the Irish to Catholicism were never easy. Viewing him as a challenge to their power and authority, the high kings of Ireland and the pagan high priests, called Druids, resisted his efforts to make inroads with the population.

But through his missionary zeal, he was able to fuse Irish culture into Christianity, whether it was through the introduction of the Celtic Cross or the use of bonfires to celebrate feasts like Easter.

Again, many of these stories could amount to no more than myth. Nonetheless, centuries after his death, the Irish continue to show their gratitude for their patron saint by wearing a spray of shamrocks on March 17. They start the day with mass, followed by a daylong feast, and prayer and reflection at night.

From 1820 to 1860, almost 2 million people left Ireland, many due to the potato famine in the 1840s and 1850s. More followed in the 20th century to reunite with relatives and escape poverty and joblessness back home.

Once settled, they found new ways to celebrate St. Patrick’s Day and their Irish identity in their new homes.

Irish-Americans, especially, were quick to transform March 17 into a commercial enterprise. The mandatory “wearin’ of the green” in all its garishness is a far cry from the original tradition of wearing a spray of shamrocks to honor St. Patrick’s death and celebrate Irish solidarity. Parades famously sprung up – especially in New York and Boston – revelry ensued and, sure enough, even the beer became green. 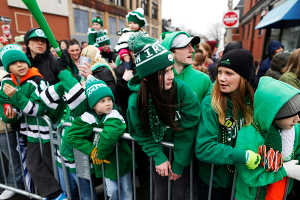 Children of Irish-Americans in the United States have absorbed Irish culture at a distance. Many probably know that St. Patrick is Ireland’s patron saint. But they might not fully appreciate his mythic stature for kids growing up on the emerald isle.

Ask children of any age in Ireland what they know about St. Patrick, and they will regale you with stories of his magical abilities, from his power to drive the snakes out of Ireland to his use of the three leaves and one stem of the shamrock to demystify the Trinity doctrine of the Catholic Church.

They see St. Patrick as a miracle worker, and as adults, they keep the legends alive in their own ways. Some follow St. Patrick’s footsteps all around Ireland – from well to hill to alter to chapel – seeking his blessing and bounty wherever their journeys take them.

Of course, in America, the holy day is really a party, above all else.

This year, Americans are expected to spend US$5.61 billion celebrating, with 13 million pints of Guinness consumed. Some parts of the country plan a pre-celebration on Sept. 17 – or, as they call it, “Halfway to St. Patrick’s Day.”

Where all of this leads is anyone’s guess. But beginning in the 1990s, Ireland seemed to grasp the earning potential of the Americanized version. Today, March 17 remains a holy day for the natives and a holiday for tourists from around the world, with pubs raking in the euros on St. Patrick’s Day.

But I’ve always wondered: What if St. Patrick had requested a silent prayer instead of “a wee drop of whiskey” to toast his passing? Would his celebration have stayed more sacred than profane? What I Learned Teaching Biology to Tibetan Buddhist Monks

by Daniel Pierce, University of Richmond
It would be quite appropriate for a college professor to assume students know that a tree is alive… by Jason Oliver Evans, University of Virginia
Every year, Christians from around the world gather for worship on Easter Sunday. Also known as… The Roots of Easter Bunny Traditions Go Way Back

by Tok Thompson, USC Dornsife College of Letters, Arts and Sciences
The Easter Bunny is a much celebrated character in American Easter celebrations. On Easter Sunday,… Skits and Satire Have Brought Merriment To An Ancient Jewish Holiday

by Zev Eleff
Purim, the springtime Jewish holiday packed with much merriment and humor, recalls the biblical…

Hieroglyphics, The Word of Gods, Magic, and Power

by Normandi Ellis
Words are magic. Thoughts create actions that manifest forms. No matter what language you are…