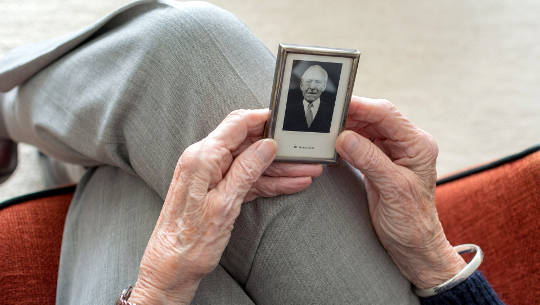 A common rite of passage at midlife is the declining health, or death, of our parents. Those who brought us into the world are usually the ones to leave it first. They welcomed us when we got here; now we'll wish them farewell as they move on to the next phase of their souls' journey.

With my father's passing, and then with my sister's, I never felt that my immediate family dwindled from five members to three. Rather, it's as if there's a photograph of five people in my head, and two of them are negatives. But the picture is the same. They're still my family.

My father was a profoundly charismatic person. Yet with that came shadows, as is often the case. With him taking such a starring role in the family drama, who else had a chance to play as large a part as we might have otherwise? In my case, and in the case of many people, we don't really have an experience of starring in our own lives until at least one parent has left the stage. That, perhaps, is why nature, in its obviously impeccable wisdom, follows a common pattern by which the parent usually dies first.

Death Is Part of a Greater Mystery

It's not until you're in the generation that will be leaving next that you feel the full weight and power of being the star in your own life. So it is that while we feel the sadness of our parents' aging and grieve for them when they pass away, we also know -- as my father used to tell me -- that death is part of a greater mystery. When I think of him now, I smile at the thought that he's no longer an old man. Someone told me once that when you die, the spirit goes back to being 35. Of course it's preposterous to think that anyone really knows these things.

It's sort of like the question "If someone I love reincarnates, does that mean they won't be there to meet me on the other side when I arrive?" Who the hell knows. I think there's some sort of multidimensional reality that lets my father reincarnate and at the same time head the welcoming committee for my mother years from now. It's that "same time" thing that makes it all possible. There is no time!

But his dying didn't end our relationship; we've simply entered the next phase of it. And what he gives to me now, in the purity of spirit, more than makes up for what he withheld from me when he was living on Earth. My father didn't simply get old and then die. In the end, after his death, he became even more of who he is. And so did I.

Dear God,
Please heal my relationship with my parents.
Whether they're on Earth
or have passed beyond the veil of death.
May only love remain between us.
May I not be broken by their weaknesses,
but may I be strengthened by their strengths.
May they be at peace,
and so may I.
Help me to forgive them,
and please forgive me.
Amen

Reprinted with permission of the publisher,
Hay House, Inc. ©2008. www.hayhouse.com.

The Age of Miracles: Embracing the New Midlife
by Marianne Williamson.

The need for change as we get older—an emotional pressure for one phase of our lives to transition into another—is a human phenomenon, neither male nor female. There simply comes a time in our lives—not fundamentally different from the way puberty separates childhood from adulthood—when it’s time for one part of ourselves to die and for something new to be born. The purpose of this book by best-selling author and lecturer Marianne Williamson is to psychologically and spiritually reframe this transition so that it leads to a wonderful sense of joy and awakening.

What we have called "middle age" need not be seen as a turning point toward death. It can be viewed as a magical turning point toward life as we’ve never known it, if we allow ourselves the power of an independent imagination, utilizing thought-forms that don’t simply flow in a perfunctory manner from ancient assumptions handed down to us, but rather flower into new archetypal images of a humanity just getting started at 45 or 50. What we’ve learned by that time, from both our failures as well as our successes, tends to have humbled us into purity. Midlife is not a crisis; it’s a time of rebirth. It’s not a time to accept your death; it’s a time to accept your life—and to finally, truly live it, as you and you alone know deep in your heart it was meant to be lived.

Info/Order this book. Also available as an Audiobook and a Kindle edition. 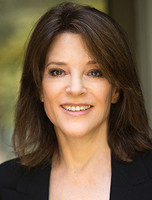 Marianne Williamson is an internationally acclaimed author and lecturer. She has published numerous books, four of which — including the mega bestseller A Return to Love — have been #1 New York Times bestsellers. A popular guest on numerous television programs such as The Oprah Winfrey Show, Larry King Live, Good Morning America, and Charlie Rose, Marianne Williamson has lectured professionally since 1983. In 1989, she founded Project Angel Food, a meals-on-wheels program that serves homebound people in the Los Angeles area. Today, Project Angel Food serves over 1,000 people daily. Ms. Williamson also co-founded the Global Renaissance Alliance (GRA), a worldwide network of peace activists. The mission of the GRA is to harness the power of nonviolence as a social force for good. She was also a Democratic candidate for President of the USA in the 2020 election. The Spirit of America: Every Generation Writes Its Chapter In This Ongoing Story by Marianne Williamson
None of us will ever forget where we were on 9/11, or how we learned about the attacks on our… by Marianne Williamson
Another day, another mass shooting. We grieve for Odessa, Tex., and we grieve for America. The… by Alex Smith
The fact that humans contribute to the warming of our planet is nothing new. Scientists have been…