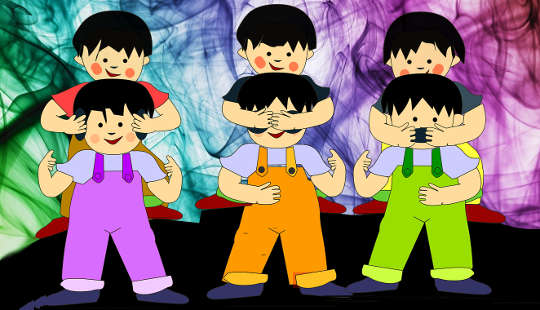 Death denial is evident in community life throughout the United States, especially in places like nursing homes, where large numbers of the elderly and infirm live out the end of their lives. I went to have lunch one day with a friend who was the medical director of a nursing home. He took me on a tour through the various patient areas and introduced me to several people, and then led me into a large room where ten patients lay in beds that were lined up against the far wall.

I went from bedside to bedside looking at each of the patients. Most of them appeared to be almost dead. The ones who didn't have a feeding tube protruding from their nose had an intravenous line dripping fluids into one of their veins. All appeared to be completely oblivious to their surroundings, and none seemed aware of our presence in the room.

These patients were being kept alive artificially even after any prospect of a useful or satisfying life had passed, simply because death was not acceptable to their next of kin. Perhaps a few of them, at an earlier time, had told loved ones that they wanted to cling to life at all costs, but more likely most of them had failed to make their wishes known to anyone at all. And in such cases, care providers are legally required to do everything possible to prolong life.

Later, when lunch was served, I observed a number of the very old and debilitated people there being spoon-fed against their will. One nurse was manually opening her patient's jaw and forcing food into his mouth, saying, "You don't want to have a feeding tube, now do you?" Death denial in care providers causes them to be unreceptive to the fact that people eventually do die, regardless of everyone's best attempts to prevent it from happening.

Death denial also blocks our ability to understand that some very elderly people who have no hope for recovery may no longer experience meaning in life and may want to die naturally by stopping their food intake. Worried care providers usually respond by forcing the person to eat or inserting a feeding tube, regardless of the patient's wishes.

Most people are so strongly habituated to death denial that when death appears they are caught entirely by surprise. Overwhelmed and confused, they tend to miss out on the extraordinary opportunity for peace and resolution that is inherent in the dying trajectory.

No News is Good News?

Death denial permeates people's lives in many different ways and powerfully influences the choices they make. Theresa, for example, was a middle-aged woman diagnosed with liver cancer. During Theresa's last office visit, her physician told her that the chemotherapy treatments she had been receiving were no longer working.

"For the past several months," the physician explained, "the treatment has had no effect other than to dangerously lower your blood cell counts and reduce your resistance to infection. So, I am tripling your pain medication and want you to come back and see me in two weeks."

Theresa wasn't informed about the gravity of her untreatable liver cancer, nor was she given any explanation about her prognosis or what she might expect in the following weeks.

Theresa and her husband clung to the comforting adage "No news is good news," and did not press for answers to their lingering doubts. Thus, even though Theresa was extremely unwell, she and her husband arrived home with their hopes bolstered by death denial. They reasoned that Theresa would be all right because "the doctor didn't mentioned anything about hospice, besides, a person has to have a terminal diagnosis to get into hospice."

Under the spell of denial, Theresa explained away her illness as a condition from which she would soon recover. She forced herself to sit at the dinner table and to carry on other activities as if all that was required for a cure was just a little more time. As the days passed, her eyes darkened with jaundice, her gait faltered, and her mind increasingly clouded. The physical deterioration was difficult to mistake.

One morning, despite her best efforts to appear normal, her eyes began to uncontrollably roll back into her head and she seemed to be drifting in and out of a coma-like state. Deeply alarmed, her husband telephoned the physician, who immediately referred Theresa to the local hospice. She died that night, just eight days after her last visit to the physician.

Theresa and her family had wanted to fill their lives with hope, and quite naturally leaned toward avoiding thoughts about the possibility of death -- an attitude supported, even shared, by the health professionals who had guided them. But such an approach not only deprived Theresa of the opportunity to prepare for her impending death; it also robbed her and her family of the chance to resolve old problems and say good-bye.

Death denial deceives us into believing that death will not come. Yet death does come, regardless of our great desire for it not to be so. And when it does arrive, the sadness and sense of loss that occurs is intensified beyond measure when we are unprepared.

Life craves life, and curative care is the most common and instinctive choice any of us make when our life is threatened by disease. It is natural to want to do everything possible to prevent or forestall death. Yet there are times when choosing curative care may in itself bring immense and debilitating problems that interfere with the chance to heal during the last phase of life.

During a dying trajectory, there are many emotional hurdles to overcome and physical problems to solve. The days pass quickly and death advances relentlessly. This is a period of tenuous waiting and delicate timing that, when not impeded by death denial, can be an opportunity for new possibilities to open and for wisdom to deepen.

Most of us strive for meaning in our lives and in our relationships, and the nearing of death brings urgency to that effort. For this reason alone, it is imperative that the prevailing medical model be revised to include a more expansive and holistic view of healing.

Reprinted with permission of the publisher,
Shambhala Publications Inc. ©2002, 2003.
http://www.shambhala.com

Sacred Passage: How to Provide Fearless, Compassionate Care for the Dying
by Margaret Coberly, Ph.D. R.N.

Sacred Passage highlights two very practical teachings on death and dying from the Tibetan Buddhist tradition and presents them in clear, nontechnical language. Readers learn about the "eight stages of dissolution leading to death," a detailed roadmap of the dying process that describes the sequence of physical, psychological, and spiritual changes that occur as we die. Coberly also presents the "death meditation," a contemplative exercise for developing a new relationship to death—and life. The book also includes a lengthy, annotated list of recommended readings for added guidance and inspiration.

MARGARET COBERLY, PH.D., R.N., has been a nurse for more than thirty years, working in inner-city trauma centers and in hospice settings. She holds a doctorate in psychology and lectures at the University of Hawaii. Dr. Coberly is also a nurse educator and works as the director of research and development at Hospice Hawaii in Honolulu.

She is the author of "Sacred Passage". Loss in the pandemic: when a loved one dies, being cut off from the grieving process can make things harder

by Glen Hosking, Clinical Psychologist
COVID-19 has affected many facets of our lives. Public health measures to stop the spread of the…

by Sara Chetkin
We cannot escape our subconscious mind, but we can use life as a treasure map to unlock the secrets…

by Mary Mueller Shutan
When kundalini awakens beyond the heart, our perception deepens and we open to psychic capacities.…