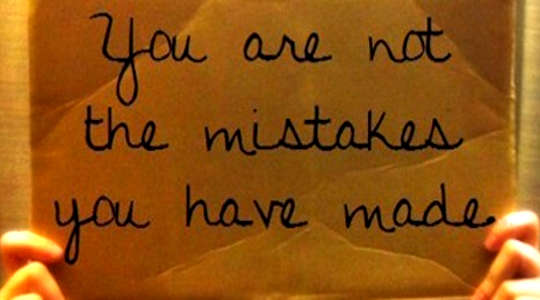 One of the ego’s chief delusions is the idea of sin, which has become institutionalized in Christianity and serves as the engine of self-hatred even for many who do not consider themselves religious.

It has often been observed that the Greek word for sin used in early versions of the Bible, hamartia, means “missing the mark.” That raises the notion of sin as an error, a mistaken or failed approach to get things right, rather than a profound crime against God or society. A Course in Miracles defines sin as the ego’s fallacious idea that one can “miss the mark” to an unforgivable degree.

The conventional idea of sin is often clothed in secrecy. We resist the revelation of our secret transgressions or indulgences, fearing not only the shame of exposure and any societal punishment that may be associated with it, but also a more lasting condemnation from a judgmental God. Even for those who don’t buy into conventional religion, a similar fear of exposure, shame, and social disapproval operates behind many forms of neurosis and emotional instability.

From the Course point of view, all this ego-drama is just a shadow play, a way to keep re-creating the idea of sin in a thousand different forms and thus continually distract ourselves from remembering that love is our “natural inheritance.”

Believing Our Sins Exile Us From Unconditional Love

Even if we don’t consciously fear divine punishment, we may believe that we have exiled ourselves from unconditional love and must conduct a perpetual and ultimately doomed search to regain its blessing in our everyday lives.

Per the Course, the undoing of the ego’s vastly complex plotting to preserve sin and defend itself against love — even while openly pining for it — is simpler than it first appears: We simply have to be willing to let it all go. By learning to forgive others and ourselves of what may seem to be unforgivable sins, we begin to release the belief that there are some errors that cannot be corrected.:

Punishment is always the great preserver of sin, treating it with respect and honoring its enormity... An error, on the other hand, is not attractive. What you see clearly as a mistake you want corrected. Sometimes a sin can be repeated over and over, with obviously distressing results, but without the loss of its appeal. And suddenly, you change its status from a sin to a mistake. Now you will not repeat it; you will merely stop and let it go. . . . (Chapter 19, III: 2– 3)

Anyone who has suffered or witnessed the ravages of a substance or behavioral addiction will recognize the idea that “a sin can be repeated over and over, with obviously distressing results, but without the loss of its appeal.” The classic Twelve Steps mode of recovery provides an orderly framework for learning to recognize and take responsibility for one’s errors, accept and extend forgiveness, and open oneself to guidance from a “higher power.”

Yet even in Twelve Step groups, an echo of the religious idea of sin remains due to the prevalent assumption of “once an addict, always an addict.” From this derives the expectation that addicts in recovery will have to attend support meetings often and perpetually, lest they relapse to addictive patterns and “unmanageable” lifestyles.

Taking Responsibility for Our Ego & Our Errors

From the ACIM perspective, all humanity shares the same root addiction: a profound habituation to a fear-driven, egocentric view of reality. Within that insane frame of reference, it doesn’t really matter whether one is addicted to sex, crystal meth, or cupcakes. Whatever the compulsion, it is just that individual’s way of falling prey to the attraction of guilt that underlies the ego’s deeply flawed yet strangely compelling logic. But we need not fear the ego’s seemingly inescapable hold on our consciousness:

Do not be afraid of the ego. It depends on your mind, and as you made it by believing in it, so you can dispel it by withdrawing belief from it... When you are willing to accept sole responsibility for the ego’s existence you will have laid aside all anger and all attack, because they come from an attempt to project responsibility for your own errors. But having accepted the errors as yours, do not keep them. Give them over quickly to the Holy Spirit to be undone completely, so that all their effects will vanish from your mind ... (Chapter 7, VIII: 5)

©2011. Reprinted with permission of the publisher,
Jeremy P. Tarcher/Penguin, a member of
Penguin Group (USA).  www.us.PenguinGroup.com.

Living with Miracles: A Common-Sense Guide to A Course In Miracles
by D. Patrick Miller.

Living with Miracles is designed to make even the novice comfortable when approaching ACIM. D. Patrick Miller leads the reader through the most common emotions, reactions, and questions that arise when studying ACIM; provides insights and tips about pacing yourself, as well as when and how to take breaks from study; and gives advice on working through early misconceptions and difficult later stages.

Click here for more info and/or to order this book:
http://www.amazon.com/exec/obidos/ASIN/1585428795/innerselfcom. by D. Patrick Miller
Cynicism seems to have a lot going for it in the modern world. I know that I didn’t give up… by D. Patrick Miller
Is there anything going on in your life that just wears you out? A thankless job, a chronic… by D. Patrick Miller
As we become adults, we have a tendency to become certain about our beliefs and attitudes. We lose… by D. Patrick Miller
Some activists believe we must be constantly aggrieved to set right the injustices of the… by Joseph R. Simonetta
It was my nature at a very young age to be observant and contemplative. I observed the restrained…