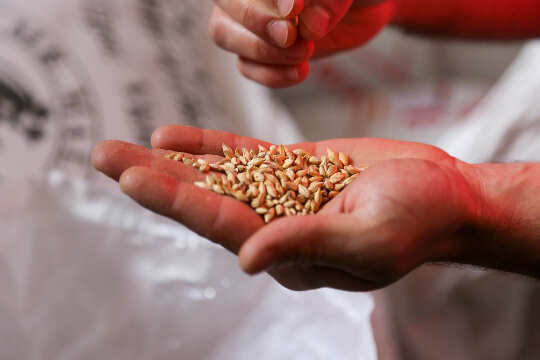 I met a musician named Jack who grew up in Harlem and played jazz at local night clubs in the 1950’s. "I jammed with my friends a lot," he told me. "One of them was Charley Parker." Jack laughed and added, "Just think -- I hung out with one of the jazz greats of all time. I had no idea the guy playing right next to me would one day become a legend."

Jack got me thinking. Every great person, from Galileo to St. Francis to Martin Luther King Jr., grew up as a normal person and did normal things with normal people. Probably none of their buddies expected that these souls would one day change the course of life on the planet and retool the destiny of humanity.

What If Your Best Friend Turned Out To Be A Hero?

What if someone close to you, maybe your best friend, turned out to be a hero to millions? "Oh, that couldn’t happen to anyone I know," you might answer hastily. But perhaps the friends of young Louis Pasteur might have spoken equally hastily.

The seeds of greatness can sprout anywhere, through anyone -- sometimes in the least likely situation. I know a hypnotherapist who was approached by a man seeking hypnotherapy for his seventeen-year-old son who was having trouble with his golf game. Feeling this would not be a valuable use of her time, she turned the man down. "I’m sorry, Mr. Woods," she told him, "I won't be able to see your son Tiger..."

He's Just A Regular Kind of Guy... Not A Saint!

Years ago I played in a band with a fellow named Ernie, who was a regular kind of guy. I lost contact with Ernie for a number of years, and then one night he showed up at a friend’s house. When I asked Ernie what he had been doing lately, he offered this astounding account:

"A few years ago I went to see a friend in South America, and one evening a neighbor came to visit. She told me she had a headache, and I asked her if she wanted me to pray for her. I did, and she felt better. That night she came back with her daughter, who was suffering from menstrual pain. I offered the girl prayer, and she experienced relief. The next night the woman was back, this time followed by all of her relatives! Hoping I could be of service, I prayed for them. The next day half the town was lined up for healing. After I came home I received a call from a town representative who told me that the people would pay my air fare back if I returned. So I did, and now I go back regularly; they fly me from town to town in a helicopter."

Upon hearing this story, my first thought was, "Ernie? Last year a bass player, this year a saint?" I had a hard time reconciling the two pictures, but then I realized I had a choice: I could negate the good that he was doing, or I could rejoice in the blessings. It felt a lot better to be excited about his success than to be cynical about it.

The Saint Next Door Could Be You

Now here’s the kicker: the saint next door could be you. What is a saint, but someone who lets the light of his or her spirit shine purely and creatively?

If you’re not quite ready to go for sainthood, then perhaps you would simply settle for greatness. Or success. Perhaps that book you’ve been playing with in your mind; that song, or that painting, or that labor-saving device, is not some random thought, but a divinely-inspired vision. Perhaps every great invention or seminar started with just one little seed thought, and the difference between living a life of struggle or fabulous success and service, is simply that some people believed in their idea, and others didn’t.

One Thing Leads to Another...

In 1985 I was invited to participate in a citizen diplomacy trip to the Soviet Union, and the organizer asked me if I knew anyone else who would be appropriate to attend. I immediately thought of my friend Patch Adams and sponsored him. On the trip Patch met actor Mike Farrell (of M*A*S*H) fame, and the two became friends. Fourteen years later Hollywood produced a major motion picture of Patch’s life, and it was produced by: Mike Farrell.

If Life Is A Chess Game, How Do You Win It?

Meeting Myself Again Through My Old Journals

The Good News and The Bad News

Little did I know, as I invited Patch to be on the trip, that I was participating in a link-up that would affect millions of people, as well as raise considerable funds for Patch’s free hospital (Gesundheit Institute) in West Virginia.

At this moment there are infinite number of ideas and talents within you, ideas that can change your life as well as that of millions -- maybe the whole planet. Who knows, the saint next door may very well be you. Pleasure: The Medicine of Sensing and Being Here Now

by Julia Paulette Hollenbery
Ancient Vedic texts describe the universe and everything in it, including us, as being made of… Pleasure: The Medicine of Sensing and Being Here Now (Video)

by Julia Paulette Hollenbery
Ancient Vedic texts describe the universe and everything in it, including us, as being made of…

Collaborating vs. Competing: Working Together Towards Agreement

by Jude Bijou, M.A., M.F.T.
Just like Colorado aspens or giant California redwoods need each other for support and to survive,…