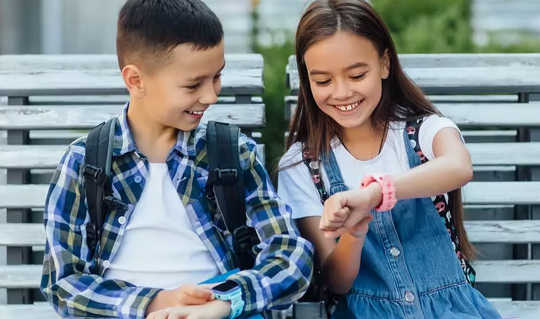 Smartwatches are becoming popular gifts for children and teens. (Shutterstock)

What do wireless speakers, streaming music subscriptions, smartphones and customized game controllers have in common? They are some of the best tech gifts for children and teens this year.

Rounding out the list are a range of smartwatches and fitness trackers, also called e-wearables. And you’re not alone if you’re thinking of buying your child or teen one this holiday season — sales of e-wearables are projected to reach US$73 billion by 2022.

According to a U.K.-based survey by Attest, 33 per cent of Gen Z (aged 24 and under) own or use an e-wearable. As Jim Taylor, author of Raising Generation Tech says, “They’re the next big thing. It’s not whether it becomes a part of the culture but when and how.”

Should Parents Be Concerned About Tech Addiction

E-wearables come in a range of prices and offer a variety of functions touted to make us healthier. Most can monitor heart rate, count steps and calories burned and track sleep. And when connected to a smartphone, many can mirror the device.

Child-friendly versions often use GPS for tracking and have an SOS button or one-way voice from parent to children. While e-wearables promise well-being, they may deliver something else entirely. Should parents be concerned?

As someone who’s been researching e-wearables as a means to teach children about mental health for over 10 years, I’ve seen some alarming unintended consequences with their use.

In my research lab, we used a simple brain-sensor headset connected to a digital game to help teach children how to be calm and focus their attention — two important parts of self-regulation that children need to succeed. While our program was successful, I noticed some worrisome side-effects.

Sometimes the systems didn’t work properly or feedback wasn’t accurate and children interpreted these technical failures as their own. We began asking; is it healthy for teens to be continuously tracked and sent feedback on their diets and exercise? How easy might be it be for a child to become addicted to their fitness tracker? Could they stop listening to their own insights and treat the e-wearable as an authority?

Most e-wearables, even those designed for children, were designed around normative assumptions and values often reflecting affluent, adult, male and performance-oriented end-users.

The designs and algorithms typically interpret well-being as better performance or more productivity. But for children this “more is better” approach may have a range of negative impacts on their well-being.

This, combined with the often-punitive tone of feedback, is cause for concern. Young people are often more susceptible to social and environmental influences, like peer pressure. Positive and negative feedback is happening during a critical time for the formation of their identity, self-esteem and self-efficacy.

So while young people’s data about their bodies are fed into devices that count everything, I focused my research on understanding how e-wearables might impact their developing sense of self. I looked at how negative messaging might impact the formation of their identity over time.

If an Apple watch tells a child that they are usually closer to completing their exercise goal by this time of day, it’s easy to see how that child may start to think of themselves as lazy. Or during the COVID-19 pandemic, a student’s stress tracker may tell them that they have ongoing high stress levels. This may cause them to develop an identity as someone who is stressed, rather than resilient and coping in the face of a stressful time.

Based on my research, interdisciplinary researcher Alexandra Kitson and I published “1,2,3,4 tell me how to grow more: A position paper on children, design ethics and biowearables.” In it we identified several areas of concern related to how the latest e-wearable technologies might negatively impact a child’s developing sense of self.

The first is the formation of identity, or who a child thinks they are, as they grow up. The second is autonomy or the development of a child’s ability to make their own decisions and not be influenced by others. We also looked at agency (a child’s sense of their ability to take action and have an impact in the world) and authority (who and what a child looks to as a source of information about themselves).

The danger here, as pointed out by historian and philosopher Yuval Harari, is that we may come to think our devices know us better than we know ourselves. For a child, the goal is not always about productive outcomes but often about processes and experiences. Being told what to do does not provide a child with the opportunity to explore, experience and learn from their own decisions.

We later looked at authenticity, the ability to be present in a moment and personhood. We then developed a set of cards for user experience designers that explains these issues and raises questions for consideration. Our research then investigated how to support children in developing an understanding of the possible unintended consequences of e-wearables.

Since then, we’ve offered workshops for young teens to explore these issues while learning about and creating their own e-wearables. During the workshop we heard about their concerns, and not surprisingly, the topic of addiction came up repeatedly.

We cannot rely on educational institutions to teach young people about these potential issues. However, they are a critical part of tech literacy that every child should learn about.

To encourage families to have conversations about the unintended consequences and potential negative impacts of e-wearables on children’s sense of self, we created conversations starters for families.

This holiday season, I encourage caregivers who want to leave a smartwatch under the tree to also take time to have family conversations about potential impacts.