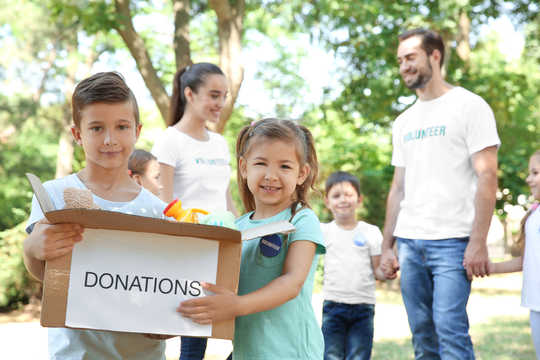 One of the most valuable lessons parents can teach their children about money might be how to give it away.

A new study explores how financial-giving habits extend through generations, and how early life lessons in giving may contribute to personal and financial well-being later on.

Existing research has established that children learn more about finances from their parents than any other source. In previous work, University of Arizona researcher Ashley LeBaron highlighted how important it is for parents to give their children hands-on experience with money, in addition to having discussions with them about money and presenting a good financial example.

LeBaron’s new study, in the Journal of Family and Economic Issues, suggests that hands-on experience with giving may be particularly important.

LeBaron and her collaborators interviewed 115 participants, including college students, parents, and grandparents, about what they learned about money from their parents. The parent and grandparent participants also were asked what they taught their children about the topic, ultimately providing researchers a picture of how families share financial lessons across four generations.

The researchers didn’t ask participants to talk about financial giving directly, yet nearly 83 percent of them brought it up as an important part of the financial education they gave or received.

“When you think about money and what kids learn about money from their parents, most of us wouldn’t think about giving as one of the basic principles of finance,” says LeBaron, a doctoral student in the Norton School of Family and Consumer Sciences in the University of Arizona College of Agriculture and Life Sciences.

“We tend to think more in terms of budgeting and saving and things like that, so it was surprising, but really cool, to see that giving was so prevalent.”

Participants described different motivations for teaching their children about giving, including a sense of religious duty, a desire to help others, and a desire to give back. They generally talked about three different types of giving:

Why teach kids about charity?

Teaching kids to give is important for a couple of reasons, LeBaron says.

“If a certain percentage of your money goes toward giving, that’s the start of a budget right there,” LeBaron says.

Lessons in giving may also help set the stage for a happier, healthier future.

“People who are generous tend to be happier and have healthier relationships, so this is shaping not only kids’ finances but aspects of their health and well-being,” LeBaron says.

Parents who already make it a habit to give financially should make it a point to let their children witness that behavior, LeBaron says. Or even better, they should consider involving their children directly in giving activities.

LeBaron and her colleagues also found that kids can influence the financial behaviors of their parents, too.

“Parents and grandparents report that they have this awareness that their kids are learning financial attitudes and values from them, so sometimes they were more giving because they knew that their children were watching them, and they wanted to set that good example,” she says.

The findings could have implications for not only how parents talk to their kids about money, but also how educators discuss the topic, says LeBaron.

“In finance classes, we never talk about giving,” she says. “But we learned that giving is maybe one of the more important facets of financial socialization, so we need to be paying more attention to how it is taught.” by Alexis Blue
Most people have an aspect of their personality they’d like to change, but it may be difficult to… by Alexis Blue
Faking positive emotions for coworkers can do more harm than good, researchers say. Making an… by Alexis Blue
Materialism may influence us to choose “green buying” rather than not buying anything at all,…