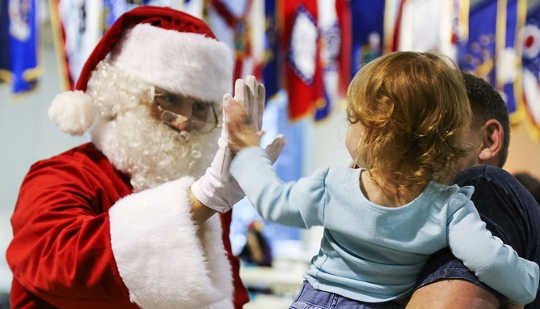 While most people agree that it is bad practice to lie to children, most parents will make an exception when it comes to Santa Claus, the roly-poly, white-bearded philanthropist who visits at this time of year with a sleighload of gifts.

Of course, not everyone’s a fan – some oppose the Santa myth on religious grounds. Others dread the day when their child inevitably learns – usually from other children – that Santa (spoiler alert!) isn’t real.

Others, however, reflect joyfully on their childhood Christmas experiences, and hope to recapture some of that magic with their own youngsters. But what effect does this all have on children and their development – are we better off just telling them the truth from the outset? Let’s take a look at the scientific evidence.

A common concern is that lying ultimately will erode children’s trust in their parents. While this may be a real possibility, it is probably one that can be managed. For example, when your child begins to question Santa’s existence, you can have an honest conversation with them about why you supported them in their belief – citing perhaps the enjoyment genuine belief produces.

It’s always possible that they might resent the deception or question your judgement in other areas – but if you are honest with them about why this situation is exceptional it’s unlikely your child will hold it against you for too long. (If you’re really worried about this you can always be truthful with your child from the start and engage in pretend play: “Let’s pretend Santa is real and leave some cookies out for him!”)

Another potential problem that is sometimes raised is that encouraging belief in Santa could make it difficult for children to distinguish between fantasy and reality – possibly delaying their cognitive development.

But research suggests that the ability to differentiate fact from fiction actually starts early in childhood and increases with age. In fact, some studies suggest that children with rich fantasy lives may actually be better at identifying the boundaries between fantasy and reality. For example, many cognitively normal children develop imaginary companions and naturally outgrow them.

Young children can distinguish impossible entities (such as flying pigs) from possible ones – what they have trouble with is emotionally charged entities, such as monsters, and those endorsed by the surrounding society, including Santa. This is because children are especially attuned to the coherence of testimony they overhear from others about these entities.

There are two main arguments in favour of letting your children believe in Santa Claus. One is the pleasure they get from the idea of the kindly old man with the big beard and sack of presents. The second is that they behave better because they think they have to be good in order to secure the best returns.

To test whether beliefs about being watched by an un-observable person helps children to behave well, I ran a study with some colleagues in which we introduced to children an invisible person named Princess Alice – “a friendly woman who could make herself invisible, but is there even though you can’t see her”. We found that, compared to playing unsupervised, children who first “met” Princess Alice (her presence implied by an empty chair) followed the rules of the game more closely, on a par with children who were supervised by a real adult. This was true especially for children who believed that Princess Alice was real.

5 Ways To Make Your Child A Creative Genius

However, any short-term benefit from believing in Santa vanishes when children stop believing in him. To achieve real behavioural change, children must learn by reflecting on their own self-motivated behaviour. Encouraging them to believe in Santa might actually temporarily make it harder for them to do so.

There are pros and cons to each route and there’s no evidence that children are harmed in either case. What’s clear, though, is that parents shouldn’t be overly worried about the repercussions of believing in Santa – children are not completely credulous.

In fact, children continually take stock of what those around them believe – and actively assess the uniformity of such beliefs to reach conclusions about the plausibility of various claims. As children’s causal reasoning develops (“Santa is too fat to fit down the chimney”), they eventually realise that he is not real, while understanding that other things they can’t actually see, for example germs, are. The key task for parents is managing the likely disappointment that comes when their children eventually grasp the truth. by Jared Piazza, Lancaster University
Are you a conflicted carnivore – loving meat but also hating that you love it? Perhaps you are… by Jared Piazza, Lancaster University
A few years ago, I discovered that a friend was cheating on their partner. This immediately… by Jared Piazza, Lancaster University
“I’m vegetarian.” “I’m vegan.” These statements typically will be met with a range of reactions,… Seven Doorways to Escape the Prison of Guilt

by Alan Cohen
Nearly every religion, family, and belief system plays on guilt to keep its adherents in line. Yet…

Being At Your Best When Things Are At Their Worst

by Alan Cohen
"You are at your very best when things are worst.” In celebration of the release of my new book The…