What's A Frolleague And Are They Replacing Our Friends? 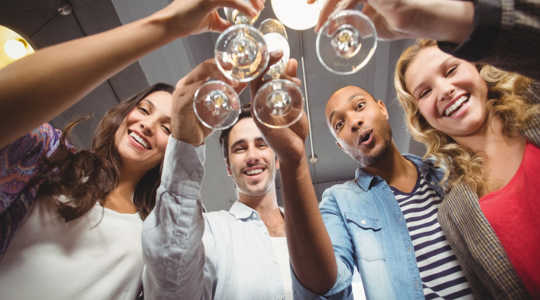 We’ve been warned about the dangers of “frolleagues”, the friends we have at work that often fill the void left by having too little time for an external social life. As far back as 2008, Linkedin claimed that: “47% of the UK’s web users are mixing their social and professional lives by accepting networking invitations from ‘frolleagues’ – colleagues who send friendship requests”. And that has brought with it the added danger of being indiscreet with information or behaviour that is probably best kept away from the workplace.

The frolleague phenomenon isn’t only confined to social media. A recent survey of employees reported that “83% count colleagues as friends (frolleagues), with 89% saying they value the friendships”. Linkedin’s original warning offered examples of how employees had got into serious trouble by being clumsily indiscreet with their personal information that was shared with, and then by, frolleagues. Previous generations before the rise of social media were firm about not mixing business with pleasure – and this has formed the basis for many a Hollywood movie.

But despite the obvious risks, the frolleague phenomenon is on the rise – some frolleagues spending more time with each other than with their own partners. You’ve only got to look at how many bars and restaurants in office precincts are packed during the evening – well after the end of official working hours.

For many people this involves drinking to de-stress after work. But for others, it is a chance to meet up with friends – and if those friends happen to be work colleagues, well, that’s a good thing. Isn’t it?

According to a study from workplace consultants Peldon Rose, frolleagues are an essential element in the formula for workplace happiness and productivity. Other studies have also suggested that workplace friendships foster health and social well-being.

A survey from corporate consultancy Globoforce in the United States suggests that it pays to have friends at work – 89% of respondents said that relationships at work impact their quality of life, while 61% reported that their colleagues have supported them through a rough time in their lives. The report goes on to say:

Frolleagues may be good for business, but they may also provide the support we need in increasingly stressful and complex environments. In competitive working environments, some colleagues may let us fall and fail – whereas we rely on frolleagues to warn us and even stand beside us if we get something wrong. Given the rise in stress felt by many employees, it isn’t surprising that frolleagues are on the rise – it’s a coping mechanism.

My own research explores the rise of the social media generation. Frolleagues are a natural consequence of the “friending” phenomenon of social media platforms such as Facebook. And this is where the dangers arise.

Blurring the lines between work and play, between office and home, also blurs the line that forms our work-life balance. Even as we develop frolleagues, many staff are expressing how highly they value a border between home and work. The danger of replacing your outside of work friends with frolleagues is that your experience of having friends ends when you get home, that you degrade and dilute your social relationships outside of work, or even that work begins to invade your home life.

Work is always going to be agenda-based, and that agenda is always present in the background of any frolleague relationships. We come into a direct, and often stressful conflict of interest every time one of our frolleagues breaks company rules.

Outside of work our friendship might be at stake; at work our job and possibly our career is at stake. One whistleblower who was sacked after revealing wrongdoing at his workplace reflected:

What haunts me most is the [betrayal of] colleagues who I had considered friends, who had worked with me and supported me – when I was dismissed, I suddenly became persona non grata.

So, there are downsides to relying too much on the support of your friends at work.

Work can follow us wherever we go. Having frolleagues can mean we have a 24/7 relationship with work, unless we place those friendships consciously. Our friendships may need to take on new boundaries where our professionalism isn’t abandoned when we make friends at work but simply redefines what friendship means. Some organisations are considering the governance issues around frolleagues, largely driven by the online connections we make with colleagues via social media.

Turning off our emails after 6pm is on the agenda of many organisations who want us to let go of work and arrive refreshed the next day. Yet with frolleagues the “work-flavoured” conversations simply displace into other channels, primarily our smart-phones.

A new skill set is potentially emerging here. There are undoubted benefits to developing frolleague relationships at work, that can energise us, make work more enjoyable and assist team work. Yet we will need to ensure they don’t harm our lives outside of work. Employees may need to become more aware of the risks of frolleague relationships, how to stay safe at work, just as we bring our children up to stay safe on the streets.

Keeping those friendships in their place may require new skills, and smarter approaches to our social media. The jury is currently out on whether 24-7 colleagues will simply re-frame work-life balance radically or destroy it.

Paul Levy, Senior Researcher in Innovation Management, University of Brighton. He is author of the new book Digital Inferno (launched in 2015).