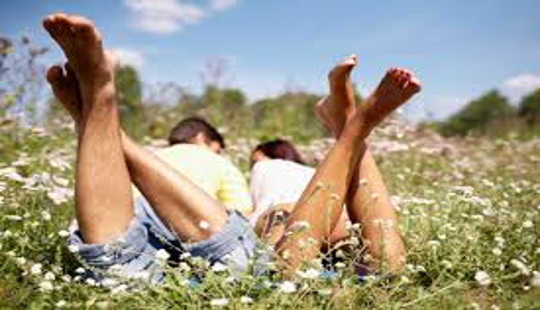 Five years ago, we would actually be having a conversation.

At the beginning of a romantic relationship, passion is not in short supply. The thrills of learning all about your beloved, sharing new experiences, and having plenty of sex, create an exhilarating state of desire and romantic love. In fact, a number of scientific studies have shown that this kind of love actually changes the chemistry of the brain, making us temporarily addicted to our beloved.

But this flame typically dims over time, and a different – perhaps deeper – emotion takes over. Research has shown that this so-called “attachment phase” is linked to a decrease in “pleasure” hormones like dopamine and serotonin and a boost in “bonding chemicals” like oxytocin. Given these extreme physical changes, is it possible for someone in a long-term relationship to revert back to being infatuated, say, in time for Valentine’s day?

Love on the brain

The physiological basis of love and infatuation has been studied a lot. In one study, researchers used fMRI, which measures brain activity by looking at changes in blood flow, to scan participants who had recently fallen in love while they looked at pictures of their partners.

It found that, compared to when they looked at photos of neutral acquaintances, participants showed greater activation in areas of the brain, like the dopamine-rich ventral tegmental area that is associated with reward seeking and goal pursuit, while looking at their beloved. These same brain regions are also activated after receiving an injection of cocaine or eating chocolate, suggesting that passionate love produces a “high” that we seek out again and again.

But as anyone who has been in a long-term relationship knows, this rarely lasts. As couples build a life together, these highs are joined by the difficulties of maintaining a household, caring for children, and navigating delicate relations with in-laws. All of these situations create opportunities for conflict and negative emotions that temper feelings of love.

Long-term studies of couples show that feelings of satisfaction, sexual activity and displays of affection like compliments and shared laughter decline over time, and these declines are especially pronounced after the first few years of marriage and after the birth of a couple’s first child. Although relationship satisfaction tends to stabilise after these big transitions, the all-consuming, addictive passion that accompanies falling in love rarely returns fully in long-term partnerships.

This reality may seem grim, but some couples do manage to maintain passionate love over time. In another brain imaging study, researchers recruited participants who had been married at least ten years and who reported that they were still madly in love with their spouse. When these individuals viewed photos of their mates, their brains showed strong activation in the same reward and motivational systems activated by people looking at the face of a new love. So what’s their secret?

Studies suggest that couples who sustain passion over time have something in common: they frequently share new experiences with their partners.

It’s easy to see why this is crucial. Couples often fall into predictable routines – eating at the same restaurants, sticking to the same schedule, and engaging in the same sexual activities. These routines may eventually lead to boredom – a formidable enemy of passion. But by sharing new experiences together, couples can shake up these routines. In another study, social psychologists set up an obstacle course and asked couples to complete it together. There was one catch: couples had to complete the course while bound to each other at their wrists and ankles. The researchers measured the couples’ feelings of satisfaction before and after completing this silly but new task.

Compared to couples completing a more mundane activity together, these participants reported increased feelings of satisfaction and love after the obstacle course. Videos of these couples were shown to objective observers, who agreed that couples who had just completed the obstacle course showed greater relationship satisfaction – that they showed more accepting behaviour towards each other and had more intimate conversations. Other experiments have repeated this finding with different types of new activities. For example, couples who had an intimate, revealing conversation with another couple they had just met reported feeling closer to their partners and learning more about their partners. These couples even showed a small increase in closeness up to one month after the interaction. This research suggests that making new friends can liven up a relationship and bring couples closer together.

Sharing new experiences increases feelings of love because it allows us to learn new things about our partners and use it to improve our understanding of ourselves – a process social psychologists call self-expansion. Meanwhile, engaging in physically challenging activities also increases physiological arousal, like elevating heart rate and breathing. When these psychological and physical effects combine, couples experience a state much like the first flush of passionate love.

So this Valentine’s day, rather than dining at the usual restaurant, try something new with your partner – a painting class, paddle boarding at the beach, or even just sharing something you’ve never told them before. Integrating new experiences into your relationship may make you one of the lucky few who remain madly in love after decades together.

Originally Appeared On The Conversation