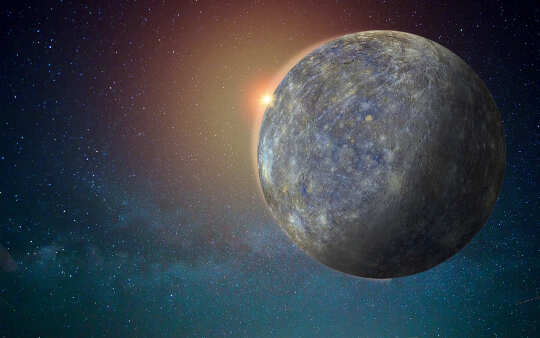 Mercury goes backwards by 'apparent' motion approximately 3 times a year -- and lasts for about 3 weeks each time it does. That's an awfully big chunk of the year when we are encouraged to sit doing nothing... or to simply deal with the breakdowns in communications, the electronic issues etc., etc.

During this period, our minds (a Mercury ruled asset) are a little jumbled, our thoughts are a little out of sync and our ability to process information becomes more keyed to understanding and assimilating issues from the inside to the outside... rather than vice-versa.

It's commonly said that "Things begun under a Mercury retrograde return to be redone after the transit is over". The reality is nothing in life, and most certainly nothing in Astrology, is so easily "cut and dried". It's all a matter of perception.

Allowing Mercury Retrograde to Empower You

While there is most definitely validity to the fact that things tend to run in a very different type of pattern during this time, it serves to empower us.... if we choose to allow it to. We get a chance to rethink our actions, our choices, our decisions, our processes.

We are forced to pay attention to what we are doing -- auto-drive just doesn't work well during these times of the year. We have to learn to be flexible and to adapt to changes in our schedules and our plans. We learn to back-up what we're doing, and to work with obstacles and mix-ups.

A large number of Fortune 500 companies initiated, incorporated, or began under a Mercury Retrograde: General Motors, Goodyear, Disney, Kodak, Boeing, and the list goes on and on. The aforementioned mentioned companies all have weathered the times, have grown as the world grew, and constantly adapt to meet conditions in a way that allows them to be extremely successful.

In reality, this period can be an empowering one to set off on an adventure... especially if you want your adventure to be one of constant growth, change, stimulation, and opportunity. It can be an amazing time to begin something new... especially so if that 'something new' is really just a mixture of things you've been accumulating in the past.

Our website was started under a Mercury Retrograde Transit several years ago, combining all the no-no's usually associated with this astrological cycle.... electronics, communications, computers, and new projects. The key periods of growth have always occurred during subsequent retrogrades. Some of them out of choice, others out of necessity.

Understanding the Possibilities of Mercury Retrograde

Many of you may not know that when Mercury goes Retrograde, it is actually at its closest point to the Earth in between the Earth and the Sun. There is a moment during the Retrograde when the planet will be at the same degree as the Sun. That degree is vital in understanding the possibilities of the Retrograde.

From October 4th through October 18th, 2000, we prepared to heal the old cycle. This period is where everything we need to work on starts appearing. (Rudhyar calls this the Epimethean Cycle named after Prometheus' Brother. Epimethean means "afterthought".)

Sequences At A Glance (these dates were year 2000)

October 4, 2000: First time Mercury enters 6° Scorpio. The old cycle is coming to a close as the issues that need to be addressed start to magnify.

November 17, 2000: Last time Mercury is at 6° Scorpio. Say goodbye to the old ways and begin the forward journey into your progress.

In Summary: The Changing of the Guards

Mercury conjuncts the sun several times a year. Once while going forward and once while going backwards. At each conjunction we switch our mode of thinking.

* On the forward conjunction (called superior) we start our journey into the Epimethean Cycle of conformity, reviewing old ways, and conservative thought.

* On the retrograde conjunction we enter the Promethean Cycle where we can think progressively and start moving out of traditional expectations.

So it is helpful to see the retrogrades as the "changing of the guards of consciousness" and it might help you look forward to these fascinating times.

As we head into another Mercury Retrograde period, take some time to rethink and reformulate your plans.... you never know what success story is waiting to unfold.

LINDA RANKIN has been studying astrology for over 30 years, practicing professionally since 1986 and is co-founder of Astrology for Life. Her focus in life and with astrology is that life works...period.