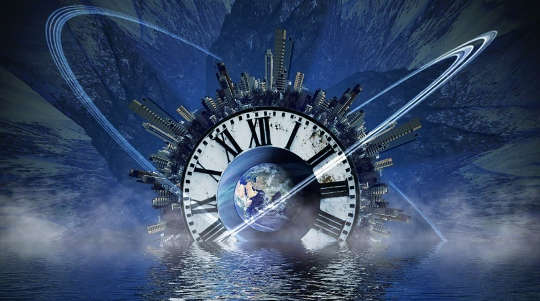 Welcome to the next major astrological event to shape our lives, ourselves and our world. Alignments such as this, between the slow moving outer planets, impact the very core of our being, catalysing irrevocable change.

The previous such event – the much discussed Uranus/Pluto Square which dominated the heavens from June 2012 to March 2015 – up-ended many lives, bringing with it disruption and challenge the likes of which were unimaginable until we found ourselves in their midst! Since March of this year we’ve been taking stock, letting the dust settle and blinking in the clarity of new light. We may have wondered what on earth hit us, whilst in many (though not all) cases, being strangely grateful that it did.

There Is No More 'Normal' Anymore

2012 feels like a distant memory and our present a whole other world from the one we occupied four years ago. Some may feel that’s change enough; we need rest and space now for things to ‘get back to normal’. In fact there is no ‘normal’ anymore. Uranus and Pluto saw to that by making all things new. Now Saturn and Neptune follow in their footsteps, raising the curtain on the next stage of becoming which recalibrates our being to accommodate the very absence of ‘normal’, alongside the joy ever present in surrender to both matter and spirit, in a world saturated with the impulse to evolve.

Saturn and Neptune are not the most obvious of friends. Saturn seeks form and certainty. It provides the boundaries necessary for growth and recognises the value of responsibility and restriction. Whilst it may thwart attempts to achieve our goals it does so when those goals won’t serve our growth. Saturn demands patience and humility, commitment and a willingness to endure when life refuses to unfold as we desire. It reminds us there is a timing for all things and imposing our own timetable upon that of an ever expanding universe will simply meet with resistance until we get back with the programme and connected with the flow.

Saturn looks out for our welfare by encouraging common sense and wisdom in equal measure. It sees where we desire to over-step ourselves without the necessary foundations in place; where we think we’ve finished with something when in fact we’re only half way through; and where we believe we don’t need to be humble when humility is the very key that will open doors to the future. We may not like what Saturn brings but the consequences of working with this mighty force of nature rather than against it are many, and once we accept that we don’t know better after all, life takes on a whole other hue!

Neptune, on the other hand, is the complete opposite. Formless and amorphous, it cannot be contained. Neptune embraces everything without condition or exception. It seeks unity: complete and utter oneness. The notion of separation is beyond anathema to this cosmic presence for it perceives all things as simply one big whole without image or identity.

Neptune cannot be defined or restricted. It has no notion of me and you, self and other. For Neptune, time is a mirage, as is place and person. It brings us moments of complete peace and those of terrifying dissolution.

Saturn and Neptune Together: Discovering the Common Ground

When under Saturn’s thumb we may cry out for Neptune’s mercy to release the pressure, but when held within Neptune’s infinite and melting embrace we may yearn for Saturn’s pragmatism to remind us who we are and why we are here.

Together these two planets provide the most polarised experiences of our lives – definition and dissolution. When they work together we’re in for some interesting times, discovering the common-ground between the extremes of form and formlessness, and how each polarity connects us with our divine nature that transcends both.

When two planets square each other we must find a way to accommodate and live both. From those who are more Neptune oriented, seeking dissolution of identity and an experience of oneness in which edges are softened and all things merge – be this through spiritual practice, creativity, love, drugs or anything else that floats your boat – Saturn requires commitment to a more disciplined path, giving shape and form to our pursuit of Neptune’s embrace. If Neptune has become not liberation from identity, form and responsibility, but escape from it, Saturn will see about that!!

There is no escape in Saturn’s world. The only way to ultimate truth is via the relative ones of identity, personality and ego maturity. If we’re trying to side-step the mundane to grab the bliss pre-emptively it will bring us down to earth with a bump, demanding we embody the path, live it in the material world with all its challenges and triumphs, demands and rewards.

Saturn teaches that we cannot transcend a world with which we refuse to engage. In embracing the Saturnine path we come to know transcendence not as rising up and out of conditions, but journeying within them so deeply that they reveal their true nature as we live in their very midst.

If, however, Saturn is more our style and we appreciate certainty and form, routine, responsibility and identity, Neptune bids us loosen our grip and see what happens; to soften around the edges and allow a little more uncertainty, a dash of doubt, in. Allow ourselves to wonder what if things are not as black and white as they at first appear? What if everything we believe is only a half truth and the opposite is equally true?

Neptune releases judgement and duality, dissolving our polarised world as it does so. It knows no right or wrong, no blame or guilt. It simply reaches out with compassion and love, seeing all things as itself and itself as all things. It reminds us we are intricately and unavoidably connected with everything and everyone whether we like it or not, and poses the question, what do we intend to do about it?!

Crossing into the Aquarian Age

We live in interesting times, requiring deep reflection on what it means to be human and what this planet needs of us to cross the great divide of ages and reach the Aquarian one. We are in the midst of that crossing now, with Neptune at the helm and Saturn checking the maps.

Where they take us in the coming year is anyone’s guess. Neptune never was one to commit itself to a plan! But we can rest assured that wherever it is we’ll be blessed with the opportunity to see life inside out and back to front, changing our perception for evermore.

All dates are GMT

For more information about these and other astrological events as they happen throughout the month, become an Awakenings Subscriber to receive regular astrology updates.

*subtitles by InnerSelf
This article was originally published
on astro-awakenings.co.uk

Sarah Varcas is an Intuitive Astrologer, committed to decoding wisdom messages and applying this wisdom to the experience of our everyday lives with all their challenges, rewards, twists and turns, revealing the bigger picture to assist all of us in navigating the road ahead. She is deeply committed to the notion that 'we are all in this together', and can often be found reading her own words to remind herself what she should be working on today! Her own spiritual path has been very eclectic, spanning Buddhism and contemplative Christianity alongside many other diverse teachings and practices. Sarah also offers an online (via email) Tuition and Coaching in Intuitive Astrology course. You can find out more about Sarah and her work at www.astro-awakenings.co.uk. No More Saviours: Reclaiming Our Mind from The Tyranny of Fear No More Saviours: Reclaiming Our Mind from The Tyranny of Fear (Video)