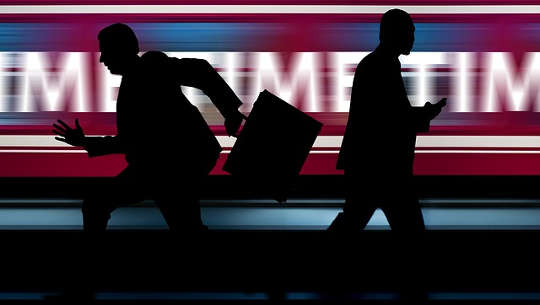 There are two assumptions related to competitiveness: to be inspired and to remain highly motivated. For those who are slacking off and just enjoying life and what they have instead of trying harder to have what everyone is supposed to want, a set of professional nags have emerged in the form of life competition coaches. They call themselves inspirationalists, motivationalists, or life strategists, and for a fee they will share their secrets of success and help us stay competitive.

Most of these parental surrogates offer little research or data to support their strategies other than their own personal success stories. They are talented talkers, capable of moving audiences to tears and cheers with gut-wrenching stories of miraculous personal victories. They sound authoritative, confident, and convincing.

Most of these coaches are sincere and truly want to help others to be as successful as they are, but many of them are themselves severe sufferers from toxic success syndrome. Ask them, "How do you know?" and they will usually answer, "From my own personal experience" or "It's just common sense." These answers are usually followed by a series of well-practiced success stories and anecdotes suggesting that anyone can do anything if they will try hard enough to be a winner.

Despite the fact that there is no evidence to support the assertion that survival depends on tapping into some natural competitive instinct or that our success depends upon the defeat and failure of others, the toxicity of vigorously pursuing being number one has led to the emergence of hundreds of success seminars and books espousing their respective steps to success -- for some reason usually seven.

Millions of dollars a year are spent by corporations to hire "motivational" speakers to stoke up their employees, and hundreds of "success" and "life planning" seminars are offered by groups such as The Learning Annex, Seminars for Success, and other similar companies. These may even have profit-sharing arrangements with the most well known self-help authors and gurus who offer their various programs on a regular basis. They often give keynote addresses at corporate incentive meetings attended by persons so highly motivated already that they have all but ruined their health and marriages to qualify to attend the meeting.

One example of the "success movement" is "The World's Top Success Seminar" offered repeatedly in several cities in the United States. It promises those who have not yet attained sufficient success in their lives that they, too, can "achieve high-level success," just like the famous motivationalists and inspirationalists on the program.

Anyone who enjoys sweet success can become tired just reading the titles of these presentations. There were no lectures that offered "The Joy of Contentment and the Danger of Competition" or "Living in SIN, the Dangers of the Self-Interest Norm."

Dozens of lecture bureaus now match organizations needing a "powerful motivator" or "inspirationalist" with professional speakers who compete among themselves to be the most requested speaker with a new, different, and better pitch. There has recently been somewhat of a "bliss backlash" among those who have been motivated and inspired by these presenters. They are beginning to question their increasing feeling of being somehow fooled or manipulated by a momentary false high induced by the motivationalist's performance. They complain that they are feeling a post inspirational crash a few weeks after the seminar or lecture that had aroused them to such a fevered pitch. The effects of the emotional pep rally wear off, and there is a feeling of being used or misled. These concerns have resulted in a quick adjustment by many speakers on success. As one speaker told me, "Now, life is in, so I'm speaking about that."

A lecture bureau president recently told me, "Balance is hot now." The current big seller on the lecture circuit is "How to Find Life Balance." The pursuit of the always-elusive balance can become something else for which we must strive. Working hard and competitively in order to qualify to attend an incentive meeting is stressful enough. To then be told by a motivational speaker to cut back, work less, and to try to live in more balance can lead to feelings of angry frustration with a company that requires constant striving.

It seems that the organization is giving mixed messages, and rightly so. At the office, the message is "Be a winner. Don't be content with second place. Work until you drop if you have to, or you won't qualify to come to the success meeting next year." Then, in the success reward meeting, the message is "We value living in good balance with plenty of time to pay attention to your family and your physical and spiritual health." The result can be "balance stress."

A Different View of Success

Nature teaches that no system is ever in balance for long. Trying to achieve balance can lead to frustration and guilt when our attempts to win big and love a lot seem to fail. Trying to cut back, cram in, make schedule changes, or put in a little more quality time sound like good life-balancing strategies, but they seldom work.

What is needed is a change of mind, a different view of success. However, this mind-set goes against the grain of the current model of success and is a very hard sell to those convinced that they can have it all by giving their all.

When we feel the stress of toxic success, we have a choice. We can revert to our primitive fight-or-flight response or intentionally select another stress response called "Tend and befriend." Life is never in balance for long, but if we elect to react to the stress of trying to be successful by thinking, "tend and befriend," we can feel a little more in control of our own life and suffer fewer negative physiological consequences.

Toxic Success: How to Stop Striving and Start Thriving
by Paul Pearsall, Ph.D.

Dr. Pearsall directly challenges many of the self-help conventions, which he finds are not solutions but part of the problem. His detoxification program has helped many TSS patients to sweeten it up by changing their mindset and taking back their attention, focusing on what they need, not what they want.

Paul Pearsall, Ph.D. (1942-2007) was a licensed clinical psychoneuroimmunologist, a specialist in the study of the healing mind. He held a Ph.D. in both clinical and educational psychology. Dr. Pearsall has published more than two hundred professional articles, written fifteen best-selling books, and has appeared on The Oprah Winfrey Show, The Monte/ Williams Show, CNN, 20/20, Dateline, and Good Morning America. Don’t Go Back To Sleep! The Future Is Calling! Total Solar Eclipse December 14, 2020

by Sarah Varcas
Reality calls and we cannot simply ignore events in this relative world of ego run amok. This solar…

by Paulo Coelho
When asked how he had become so successful, he replied, that until days ago he was living as the…

by Erika Buenaflor, M.A., J.D.
The concept of soul loss may seem foreign and perhaps impossible for people who see the soul as an…