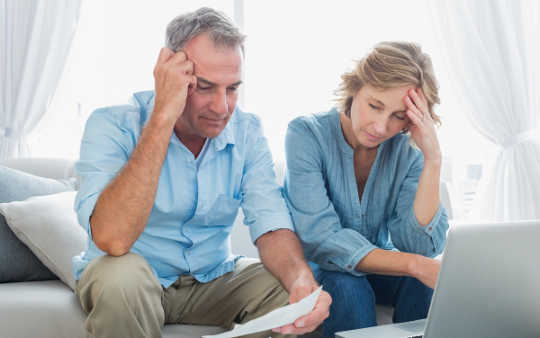 Among older people who have been hospitalized for a heart attack, severe financial strain—having too little money each month to make ends meet—is associated with a 60% higher risk of dying within six months after hospital discharge, a new study shows.

“We found that severe financial strain was associated with increased risk of mortality. It’s a call to the clinical world that we need to pay attention to patients’ financial status,” says study coauthor Alexandra Hajduk, associate research scientist in the internal medicine department’s section of geriatrics at Yale University School of Medicine.

There is extensive evidence that many older people are at-risk for financial strain due to reduced income opportunities and financial losses following recent economic downturns.

The researchers examined whether financial strain might also be associated with a higher risk of dying following an acute myocardial infarction (AMI), commonly known as a heart attack, among older adults.

This question and its answer are part of the larger “Comprehensive Evaluation of Risk Factors in Older Patients with AMI” or SILVER-AMI study, a cohort study led by Sarwat Chaudhry, associate professor of medicine (general internal medicine), that aims to improve understanding of factors that predict health outcomes following heart attack in US adults ages 75 and older.

For the present study, study coordinators at hospitals across the country asked SILVER-AMI participants, who were hospitalized with a heart attack and enrolled in the study from 2012 through 2016, whether they had more than enough money to make ends meet (defined as no financial strain), just enough (moderate financial strain), or not enough (severe financial strain).

The researchers adjusted their data to account for factors beyond a recent heart attack that can influence the risk of death, such as other medical issues and conditions associated with aging. After those adjustments, the researchers found that patients who reported severe financial strain were 61% more likely than patients reporting no financial strain to die within the six months following a heart attack.

“As an epidemiologist, I am hesitant to draw any causal associations between financial strain and mortality based on this observational study. But we could certainly posit a number of mechanisms,” Hajduk says.

Financial strain could make it harder for patients to access transportation to their follow-up appointments and to afford co-pays for their medications, which could result in missed appointments and skipped medication doses, Hajduk says.

“It could run the gamut: from not being able to fill a prescription at all, to skipping doses, which could be very dangerous for some of these drugs, to splitting doses in half to make them last longer,” Hajduk says. Increased stress from money problems could also worsen health outcomes due to the effects of chronic stress on the body, she adds.

Prior research has already established that poverty, defined using “absolute” measures such as being eligible for Medicaid, income is associated with poor health outcomes, Hajduk says. This study revealed a similar association between financial strain and mortality risk.

“What’s particularly interesting about this study is that we investigated death risk in relation to older adults’ perception of their financial status, not their actual poverty level. Older adults who report financial strain—whether they have trouble making the rent on a studio apartment or covering the mortgage for a multimillion-dollar mansion—people in either of those scenarios could face financial strain such that they have trouble making their ends meet and paying for their life,” Hajduk says.

“I find it interesting that that this very subjective, person-specific measure of financial distress is associated with mortality after a heart attack.”

The results suggest that asking older adults who are admitted to the hospital with heart attacks about their financial strain could identify patients who will be at higher risk of death following discharge, Hajduk says. Social workers could then refer patients with severe financial strain to social services to help them pay for transportation to and from follow-up appointments, prescription drug co-pays, and other medical needs.

“These are things that can be coordinated at the time of hospital discharge that may improve outcomes,” Hajduk says. It is less clear what can be done for patients who report severe financial strain but do not experience “absolute” poverty—a conundrum encountered in other areas of finance, such as finding ways to cover high college tuition fees when one does not qualify for need-based loans.

The study appears in JAMA Internal Medicine. Additional researchers from Yale and the University of Maryland contributed to the work. Why Your Morals May Be More Flexible Than You Think

by Yale University
Disapproval of qualities people often associate with immorality such as selfishness, dishonesty,…