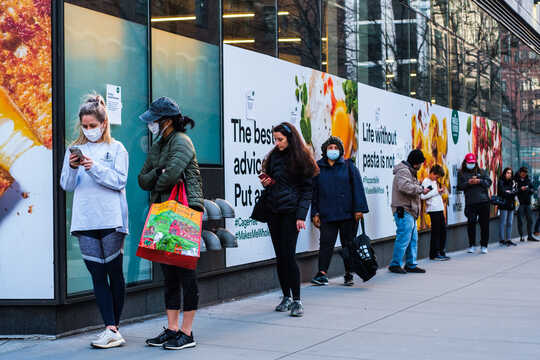 People haven't been as irrational during the pandemic as some initially thought. Jennifer M. Mason/Shutterstock

Several governments worried that their pandemic restrictions would quickly lead to “behavioural fatigue” so that people would stop adhering to restrictions. In the UK, the prime minister’s former chief adviser Dominic Cummings recently admitted that this was the reason for not locking down the country sooner.

Meanwhile, former health secretary Matt Hancock revealed that the government’s failure to provide financial and other forms of support for people to self-isolate was down to their fear that the system “might be gamed”. He warned that people who tested positive may then falsely claim that they had been in contact with all their friends, so they could all get a payment.

These examples show just how deeply some governments distrust their citizens. As if the virus was not enough, the public was portrayed as an additional part of the problem. But is this an accurate view of human behaviour?

The distrust is based on two forms of reductionism – describing something complex in terms of its fundamental constituents. The first is limiting psychology to the characteristics – and more specifically the limitations – of individual minds. In this view the human psyche is inherently flawed, beset by biases that distort information. It is seen as incapable of dealing with complexity, probability and uncertainty – and tending to panic in a crisis.

This view is attractive to those in power. By emphasising the inability of people to govern themselves, it justifies the need for a government to look after them. Many governments subscribe to this view, having established so-called nudge units – behavioural science teams tasked with subtly manipulating people to make the “right” decisions, without them realising why, from eating less sugar to filing their taxes on time. But it is becoming increasingly clear that this approach is limited. As the pandemic has shown, it is particularly flawed when it comes to behaviour in a crisis.

In recent years, research has shown that the notion of people panicking in a crisis is something of a myth. People generally respond to crises in a measured and orderly way – they look after each other.

The key factor behind this behaviour is the emergence of a sense of shared identity. This extension of the self to include others helps us care for those around us and expect support from them. Resilience cannot be reduced to the qualities of individual people. It tends to be something that emerges in groups.

The problem with ‘psychologism’

Another type of reductionism that governments adopt is “psychologism” – when you reduce the explanation of people’s behaviour to just psychology. But there are many other factors that shape what we do. In particular, we rely on information and practical means (not least money!) to decide what needs to be done – and to be able to do it.

If you reduce people to just psychology, it makes their actions entirely a consequence of individual choice. If we get infected, it is because we chose to act in ways that led to infection: we decided to go out and socialise, we ignored advice on physical distancing.

This mantra of individual responsibility and blame has certainly been at the core of the UK government’s response throughout the pandemic. When cases started rising in the autumn, the government blamed it on students having parties. Hancock even warned young people “don’t kill your gran”. And as the government envisages the total removal of restrictions, the focus on what people must do has become even stronger. As the prime minister recently put it: “I want us to trust people to be responsible and to do the right thing.”

Such narratives ignore the fact that, at various critical points in the pandemic, infections rose not because people were breaking rules, but rather heeding advice, such as “go to work” and “eat out to help out”. And if people did break the rules, it was often because they had no choice. In many deprived areas, people were unable to work from home and needed to go to work to put food on the table.

Instead of addressing these issues and helping people to avoid exposing themselves and others, the individualistic narrative of personal responsibility blames the victim and, indeed, further victimises vulnerable groups. As the delta variant took hold in UK towns, Hancock took the opportunity to stand in parliament and repeatedly blame people who had “chosen” not to have the vaccine.

This brings us to a critical point. The fundamental issue with the government’s distrust and its individualistic psychology is that it creates huge problems.

The UK government assumed that people’s cognitive fragility would lead to – and explain – low adherence with the measures necessary to combat COVID-19. But the evidence showed that adherence was high due to a sense of community among the public – except in areas where it is hard to adhere without adequate means. Instead of emphasising individual responsibility and blame, then, a successful response to the pandemic depends on fostering community and providing support.

People help each other in a crisis. encierro/Shutterstock

But here’s the rub. If a government constantly tells you that the problem lies in those around you, it corrodes trust in and solidarity with your fellow community members – which explains why most people (92%) state that they are complying with the rules while others are not doing so.

Ultimately, the greatest threat to controlling the pandemic is the failure of people to get tested as soon as they have symptoms, and to provide their contacts and self-isolate. Providing adequate support for isolation is critical to all of these. And so, by deprioritising the case for support, blaming the public fuels the pandemic. The government’s psychological assumptions have, in fact, squandered the greatest asset we have for dealing with a crisis: a community that is mobilised and unified in mutual aid.

When an inquiry is eventually held about the UK’s response to COVID-19, it is essential that we give full attention to the psychological and behavioural dimensions of failure as much as the decisions and policies implemented. Only by exposing the way in which the government came to accept and rely upon the wrong model of human behaviour can we begin to build policies that work. by Eileen Caddy MBE and David Earl Platts, PhD.
We have found the primary reason most of us do not make the choice to love more freely and fully is…

by Vannoy Gentles Fite
Coming from a family of high-strung, addictive, compulsive, and emotionally wounded members, I have…

How To Move From Worldly Complexity Into Divine Simplicity

by Pierre Pradervand
For someone on the spiritual path, one of the most beautiful discoveries is that everything becomes…