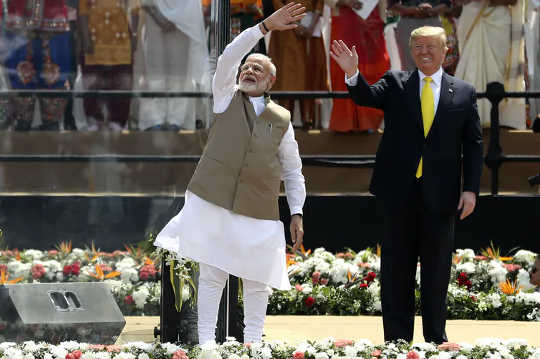 Politicians deepen existing divides when they use inflammatory language, such as hate speech, and this makes their societies more likely to experience political violence and terrorism. That’s the conclusion from a study I recently did on the connection between political rhetoric and actual violence.

President Donald Trump is not the only world leader who is accused of publicly denigrating people based on their racial, ethnic or religious backgrounds.

In the 2019 parliamentary campaign in India, politicians from the ruling Bharatiya Janata Party targeted Muslims as part of a widespread electoral strategy to galvanize Hindu nationalism. Similarly, in the 2019 Polish election, incumbent president Andrzej Duda made demonization of the LGBT community as well as foreigners the centerpiece of his successful reelection campaign.

Hate speech has also figured prominently in the recent rhetoric of political leaders in a variety of countries including Russia, Colombia, Israel, Egypt, Ukraine, the Philippines, Italy, Greece, Sri Lanka and Iraq.

These remarks are not just empty rhetoric or political theater. My research shows that when politicians use hate speech, domestic terrorism increases – in the U.S. and in other countries.

Indeed, since the beginning of Trump’s 2016 presidential campaign, domestic terrorism has more than doubled in the United States. During the Obama administration’s two terms, the U.S. averaged 26.6 incidents of domestic terrorism per year, according to the Global Terrorism Database. The most active year, by far, was 2016, which saw 67 attacks, more than double Obama’s overall average. During the first two years of Donald Trump’s presidency, 2017 and 2018 – the latest year for which data are available – domestic terror activity stayed that high, with 66 and 67 attacks, respectively.

More polarized societies are especially susceptible to bouts of political violence and terrorism when politicians use hate speech. Examples include Weimar Germany in the 1920s and 1930s, which featured assassinations of leftist politicians and street brawling by Nazi partisans; Argentina in the 1970s during the so-called “Dirty War” in which government-backed right-wing death squads fought with left-wing political movements who themselves engaged in terrorism; and Turkey in the late 1970s early 1980s, when ultranationalist right-wing organizations and leftist opposition movements attacked each other.

When taken to an extreme, hateful rhetoric by political leaders can precipitate civil wars and genocides, as was the case in the 1990s in Rwanda, where Hutu extremists used anti-Tutsi radio broadcasts to foment widespread violence. 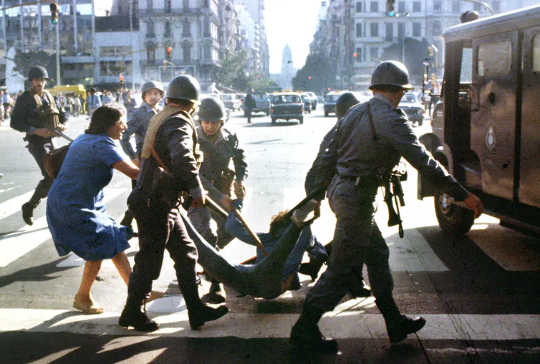 In Argentina in the 1970s, political polarization and inflammatory politicians led to violence in the streets. Horacio Villalobos/Corbis via Getty Images

For my analysis, I used statistical data on domestic terrorist incidents from the Global Terrorism Database at the University of Maryland, and major party figures’ use of hate speech in about 150 countries between 2000 and 2017 from the Varieties of Democracy project at the University of Gothenburg, Sweden.

I tried to determine the relationship between politicians using hate speech and the number of domestic terror attacks the country experienced the following year. Other elements can affect domestic terrorism, so I factored into my analysis each country’s political system, its gross domestic product per capita, its population size, its degree of ethnic and linguistic diversity and its level of media freedom.

To further distinguish political violence that was specifically produced by hate speech, I also factored in how much domestic terrorism the country had experienced in previous years and whether or not the country was experiencing a civil war.

What I found is that countries where politicians frequently weave hate speech into their political rhetoric subsequently experience more domestic terrorism. A lot more.

Countries such as Costa Rica or Finland, where the data show politicians “never” or “rarely” employed hate speech, experienced an average of 12.5 incidents of domestic terrorism between 2000 and 2017. Countries where politicians were found to “sometimes” use hate speech in their rhetoric, such as Belgium or Cyprus, experienced 28.9 attacks on average.

However, domestic terrorism was quite frequent in countries whether politicians used hate speech “often” or “extremely often.” Such countries, including Iraq, Russia, Turkey and Sudan, experienced an average of 107.9 domestic terrorist attacks during that period.

What public figures say can bring people together, or divide them. How politicians talk affects how people behave – and the amount of violence their nations experience. by Marie T. Russell
Have we not all asked ourselves this question at one point or another? "What's it all about?" Since…

The Positive Side of Expectations: Encouraging the Behavior We Want from Others