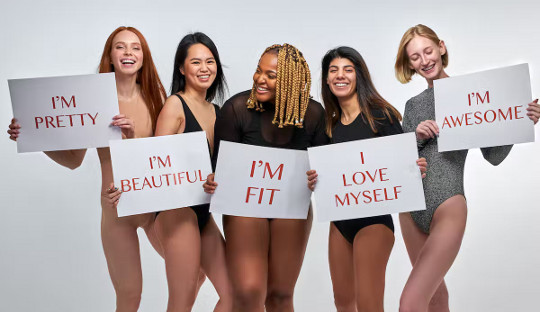 Some feel body positive messaging can actually have the opposite effect of what’s intended. Roman Chazov/ Shutterstock

You define beauty yourself. You are more than a number on a scale. Love yourself the way you are. Body positive messages like these seem to be everywhere from social media to TV ads. But while some find the body positivity movement to be uplifting and helpful, others have begun calling the movement “toxic” and suggesting it may be time to move on from this way of thinking.

Body positivity has its roots in radical fat activism that began in the late 1960s. Alongside activism among ethnic minority women, these groups protested against structural biases and discrimination, especially from the fashion and beauty industries that profited from making people and communities feel inadequate.

Over time, this evolved into the body positivity movement as we know it today. Initially, the movement was driven by popular social media accounts that challenged narrowly defined societal standards of appearance.

But some say the movement shifted away from its radical roots when it went mainstream. This was largely thanks to corporate brand campaigns, such as Dove’s Real Beauty campaign and promises by fashion magazines to show a more diverse array of bodies.

Body positivity’s aim to promote acceptance and appreciation of a diversity of body types and sizes may explain why it has such a broad appeal. And indeed, there’s evidence that such messaging can have a positive impact. Studies show that women exposed to social media accounts and content about body positivity have better mood, as well as greater body satisfaction and emotional wellbeing.

But despite the positive effect body positivity can have, more recently some have voiced concerns. They are worried the movement itself is exclusionary and that it may actually do more harm than good. For example, the singer Lizzo says that the movement has been “co-opted by all bodies” and has become about celebrating “medium and small girls and people who occasionally get rolls”.

Others feel that the movement continues to exclude marginalised bodies, with the most influential body positive accounts and posts typically depicting conventionally attractive white women. One analysis of almost 250 body positivity posts on Instagram found that 67% of the posts featured white women, with men and ethnic minority women seriously under-represented.

Others have said that the emphasis on loving your looks actually reinforces society’s preoccupation with appearance over other attributes. One study found that when women watched a lifestyle television programme aimed at promoting body positivity, they experienced similar increases in anxiety about their body and dissatisfaction compared to women who watched a programme about fashion models.

Such body positivity content may have a negative impact on viewers because it does little to challenge the underlying idea that people are valued primarily for their appearance. Despite its positive spin, the movement still encourages people to work on their body and engage in beauty practices. And if you fail to be body positive, it’s you that’s at fault.

Likewise, some commentators find the involvement of corporations and the “performative activism” (doing something because of how it looks rather than what it achieves) of the movement to be problematic. In her influential article Body Positivity is a Scam, writer Amanda Mull argued that in divorcing itself from its radical past, the movement ignores the structural reasons that lead to negative body image, such as gendered inequalities and systems of oppression. Instead, the messaging now shifts the focus onto individuals and their ability to feel happy in their body.

Some even feel the current movement pushes a form of “toxic positivity”, the expectation that we should always be positive no matter what, and that we should silence negative emotions in ourselves and others. Much of the current movement’s messaging emphasises that people should show confidence and acceptance in their body. The end result is that those who fail to achieve body confidence end up feeling like they’ve failed themselves.

There’s some recent evidence to support this idea. One group of researchers exposed women to this kind of toxic body positivity using various images – such as ones that depicted the message, “You MUST accept your body or you will never be happy”.

Across a series of experiments, women exposed to such messages didn’t feel any better about their body image. Instead, their body image only improved when the participants understood that people close to them (such as friends or family) appreciated them for who they were – rather than what they looked like.

Many are now moving away from the body positivity movement and the pressures that come from it entirely, and instead are getting behind the body neutrality movement. Rather of focusing on physical appearance, body neutrality is the idea that we can exist without having to think too much about our bodies one way or the other.

We are all more than just our bodies. We are complex beings with a range of emotions and feelings about our bodies.

And because body neutrality de-emphasises the focus on appearance, it allows us to better appreciate all the things our bodies are able to do. Being grateful for being able to do the hobbies you love or appreciating your body for what it’s capable of doing are both examples of body neutrality.

In fact, there’s evidence to suggest that body neutrality can be beneficial to us. Across cultures and demographic groups, body neutrality is associated with more positive body image and mental wellbeing. And the good news is there are many ways you can develop body neutrality, including writing-based therapies, yoga and spending time in nature. Do Women Really Go For Bad Boys? Here's The Science That Settles The Question

by Viren Swami
“Nice guys finish last” is one of the most widely believed maxims of dating. Is Planet Earth A School for Good and Evil?

by Marie T. Russell, InnerSelf.com
As I do in life itself, I look for messages when I watch movies. And because The Universe, All That… How Conspiracy Theories Take Hold and Do Harm

by Scott DeJong, Concordia University
Stranger Things’ conspiracy leanings point out how easily influenced people can be when they are… by Evelyn C. Rysdyk
Life happens, and you are bound to experience feeling angry, anxious, judgmental, accusatory, and…