What The Season Of Fall Teaches Us About Life And Death 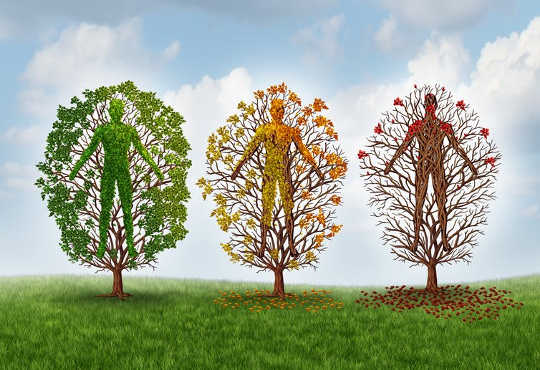 What fall teaches us about life and death. Lightspring/Shutterstock.com

I was launched as one; and ended up being trillions of them. The cells composing my body are amazing micro-machines; one hundred of them can fit into the period at the end of this phrase. Regardless of my awareness, each of these teeny tiny units strictly performs its own intricate duties: breathing in oxygen and secreting out carbon dioxide, multiplying by splitting into two, migrating around or idling for a while, and ultimately maturing to lay down the specific type of supporting structure known as matrix. The matrix surrounds the cell and sustains its specific function – like soft matrix for skin and hard matrix for bones or teeth.

A cell even has its own brain or, if you will, control panel: the nucleus. This nucleus contains the instructions for building a cell and an entire individual. This four-letter code, known as DNA and measuring 2 meters long from a single nucleus, dictates every single programmed task the cell performs during its life.

Interestingly, the function of a cell does not end at maturation or when it finishes secreting the matrix. The cell’s function is only complete after its final task which is, amazingly, to die: programmed cell death. The term “programmed” describes the organized, planned and careful dismantling of the cell’s components rather than a sudden unpredictable ruination.

The planned process could be compared to the careful disassembly of a Lego castle. In contrast to the instant gravity-driven wreckage on the ground, pieces are taken off and organized back into their original slots to be eventually reused and reassembled into another complex construction. This organized and programmed “ending” of the life of a cell was sensibly given the biological term “apoptosis” – from Greek “apo,” which means off/away, and “ptosis,” which means dropping, referring to the falling leaves.

What is more intriguing than the apoptosis process itself is the analogy behind its name. During autumn, leaves dry and fall off the tree. Despite leaving an obvious leafless and seemingly lifeless structure, it is only by shedding its leaves that the tree can survive the windy and sun-deprived winter, when sudden gusts could blow down a tree laden with a large surface area of leaves.

In other words, dismissing its leaves before winter, the tree prepares to reduce wind resistance and to save energy to re-blossom in the spring.

Taking our bones as an example, the balance between the newborn and dying cells is the key to the natural turnover for our healthy skeleton. In fact, about 10 percent of our bone mass is renewed every year with cells dying and new ones taking their place. When the balance of this process is disrupted, disease results. Too many dying cells leads to the loss of bone mass, such as in a condition known as osteoporosis, which means porous bones. Too many new cells leads to bone tumors. Having their programmed death gone awry, cells multiply indefinitely and uncontrollably – a condition known as cancer – which sets the whole body to an eventual death.

On different scales – the leaf for a tree, the cell for the body, the individual for the society – what we perceive as death is actually an act of carrying on life. Mourning the separation from our beloved inevitably, and rightfully, overrides our understanding – or rather the inability to understand - death, life’s plainest and most puzzling fact and inescapable fate.

All of us will eventually drop off the tree. In fact, birth could ironically be regarded as the primary predisposing factor for death; the only guarantee not to fall off is not to get seeded in the first place.

Before it is too late

Having experienced wet eyes, I am not trying or daring to make the departure of our beloved ones into a soothing scientific technicality or underestimate the associated feelings. Indeed, despite what we can learn from trees, we are not trees: Feelings are an integrated part of our existence and are what makes us human.

Ruth McKernan, a British neuroscientist who studies how our brain functions, having struggled through the moments of her father’s agony and endured the grief of separation, puts it this way in her book “Billy’s Halo”: “That is science and that is real life. At the moments of separation, all the theory doesn’t make it easier to bear.”

This fall, while contemplating the panoply of the fall colors and the leaves dropping, let us remind ourselves to cherish our seniors while they are around. Acknowledging that our comfort and joy are not synonymous, let us serve them with appreciation for what they have contributed in our lives.

Remembering who have passed, let us celebrate their legacy that paved the way to new blossoming generations; and certainly we shall mourn our beloved who have prematurely left. Let us decide to do the best we can, wherever and whenever we can for our family, friends, coworkers and all our fellow “leaves” in society as long as we are still connected to its branches. by University of Copenhagen
Horses, pigs, and wild horses can distinguish between negative and positive sounds from their… Lifting Weights To Look Buff May Lead To Reverse Anorexia

by Kristen Johnston, University of Queensland
All men who immerse themselves in bodybuilding describe themselves as having some degree of muscle…