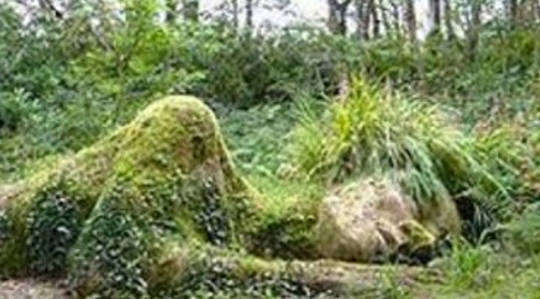 The Earth — even the Universe — is alive, is part of a holographic totality, is conscious, and has both an energetic and physical reality. It may be challenging for you to think of the Earth and other celestial bodies as conscious, yet that is the conclusion currently gaining momentum in quantum physics. As strange as it may seem, this is a living universe that is conscious and shares an energetic essence.

Earth is our mother in more ways than one. Not only are our bodies made from the physical substance of the Earth, but the forms we take are based on the energy matrix of the planet as well. We are in physical exchange with the Earth through the air we breathe, the water we drink, and the food we eat. Our bodies are maintained on the substance of the Earth, and our energetic body is created, fed, strengthened, stabilized, and developed from within the energy matrix of the Earth. Connecting with the Earth supports your health, energizes your being, and empowers creative living.

Ancient cultures respected the Earth as a living being. They knew that human life was an interdependent part of the larger whole of the planet.

What the Indigenous people knew and what guided their actions can be summed in the quote alleged to have been spoken by Chief Seattle: “Man did not weave the web of life. He is merely a strand of it. Whatever he does to the web, he does to himself.” This quote has been used as a call to environmental awareness and a call to respect for Native American rights. However, it has a third application as well: It’s a call to holographic awareness—to acknowledge that each person’s individual transmission is reflected in the whole. Every thought, every behavior, every action of each person creates the fabric of Earth consciousness, the vibration of our collective frequency.

Living Energy Systems of the Earth

The Earth essentially has the same energy structures as humans. It has an aura, chakras (also called vortices, sacred sites, and power spots), and meridians that are referred to as ley lines.

Indigenous people were aware of Earth energy structures and geared ceremony to utilize the inherent power at specific locations. Ancient Mayan codices (books) revealed that temples were built on sites of higher Earth energy, called k’ul, to increase the sacred power in the buildings. Ancient megalithic sites such as Stonehenge and Avebury in England also seem to have been built with the same awareness of Earth energy.

The Aura of the Earth

The Earth’s aura is an energy field that streams energy to and from other celestial bodies. Clairvoyants describe the field as having multiple layers that, as with the human aura, receive and translate frequencies into the Earth’s chakras, then transmit them across the planet through the meridians. Collective emotions and thought forms show up in the Earth’s aura as clouds or vapors of energy with various colors, shapes, and densities.

The Earth’s aura stores the frequency of all emotions, thoughts, ideas, beliefs, actions, and behaviors of every individual. Frequencies that are fed by large numbers of people with great emotional intensity will have high amplitude. People tune to different frequencies with their beliefs. A low-frequency belief with high amplitude is seen in its worst form as mob mentality.

In its positive aspect, spiritual practices and group meditation/prayer are enhanced every time another person tunes in and heightens the amplitude of power available to all. The benefits can also be seen in scientific investigation. Often when problem-solving, a person accesses the knowledge of others working on the same problem. In short, there is an energetic think-tank going on with everyone who is working on the same problem.

Energy streaming into the Earth through the Earth’s aura is grounded into the planet through the Earth’s chakra system. As the human body has seven major chakras, the Earth is also claimed to have seven key chakras, also known as power sites.In addition, there are thousands of minor chakras that occur whenever lines of energy, or ley lines, cross and create a vortex. Vortices have been considered sacred sites by Indigenous people for the beneficial energy they exude. Megalithic stone circles such as Stonehenge have been constructed on vortices as have temples built by the ancient Chinese, Tibetans, Mayans, Hindis, and Egyptians.

Indian guru Sai Baba claims there are 70,000 minor sacred sites across the planet, along with the seven major centers. According to Robert Coon, the major chakras are: the Root chakra—Mount Shasta in California; the Sacral chakra—Lake Titicaca in Peru; the Solar Plexus chakra—Uluru and Kata Tjuta, the red rock of Australia; the Heart chakra—Glastonbury, UK; the Throat chakra—Great Pyramid at Giza in Egypt. The Third Eye chakra is considered to be mobile by Coon, though others say it is Kuh-e-Malek Siah in Iran, and the Crown chakra is Mount Kailas in the Tibet Himalaya Mountains.

Sacred Sites and Places of Power

There is immense power in sacred sites that can add a significant power boost to energy practices, meditations, or ceremonies conducted in energy vortices. Because these areas ground higher frequencies from celestial realms, when accessed they can help you expand your consciousness. Meditating at the planet’s seven key chakra sites can cleanse and purify your own chakra system and help both personal and planetary healing. The Mayan legends claim that people everywhere are being awakened by the ancient sites and stimulated to remember their spiritual identity.

Although many people don’t have the ability to travel to sacred sites, fortunately time and space don’t limit the ability to connect, which can accomplished by sustaining the image of a particular site while meditating. You may find that focusing on photographs can help focus your intent. More important than going to the places that have been labeled as power places, or where sacred structures have been built, is finding your own place of personal power.

Reprinted with permission of the publisher, The Career Press Inc.
www.careerpress.com www.newpagebooks.com
©2011 by Synthia Andrews. All rights reserved.

The Path of Energy: Awaken Your Personal Power and Expand Your Consciousness
by Dr. Synthia Andrews, ND

Dr. Synthia Andrews is a naturopathic physician with thirty years experience as a massage and energy practitioner. She uses the techniques in her book "The Path of Energy" in client sessions and in meditation groups. She is co-author of The Complete Idiot's Guide to 2012 and The Complete Idiot's Guide to the Akashic Record. She teaches energy awareness workshops and lectures around the world. She offers web-based support for techniques in this book and guided audio meditations at www.thepathofenergy.com. by Stefan Forstner
Have you ever been in more than one place at the same time? If you’re much bigger than an atom, the… by Philip Goff
Explaining how something as complex as consciousness can emerge from a grey, jelly-like lump of… Psychic Science: The Link Between Science And Spirituality The Time of Choice: Who Are You? And What Do You Want?

by Mike Bara
The physics and the astrology say we are going to become even more polarized. We are here, all of…