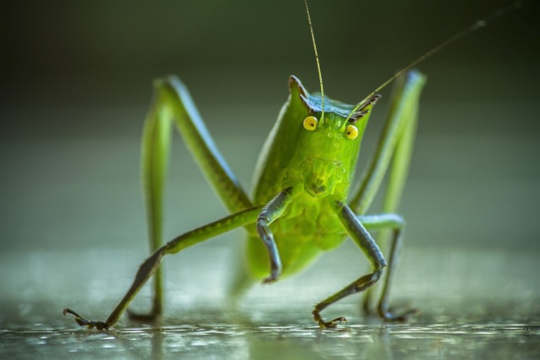 When we consider interspecies communication we usually think in terms of human-creature exchanges or interactions in which some kind of relationship has been established. But it is not uncommon for us to experience -- or to know of those who experience -- an interaction with members of the plant kingdom.

Occasionally we expand our definition of communication to include those individuals who understand other life expressions or forces of nature, such as the wind, the rain, or the waves crashing on a beach.

Seldom, however, do we include insects as fellow communicators, as inhabitants of this planet to whom we would want to listen or talk. With the exception of bees, earthworms, ladybugs, praying mantises, and a few other acceptable species, our usual response to insects is to ignore or to annihilate them. Most people, if they could, would deny insects planetary citizenship.

Yet, in the final analysis, life on earth would be impossible without insects; they are essential links in the ecological chain. While people grudgingly accept this fact, they are not anxious to share in other ways. Those who have learned in some manner to interact with these small residents, however, have been amazed by their intelligence.

One of the most fascinating stories of the rapport between man and an insect was J. Allen Boone's relationship with a common housefly he called Freddie. Boone made friends with the fly, and it would join him each morning at seven o'clock by landing on his shaving mirror. Boone would invite him to climb aboard his finger and he would gently stroke the fly's wings. Freddie paraded up and down his finger, and they would play a game in which Boone tossed the fly in the air and caught him again on the tip of his finger.

The early-morning rendezvous between fly and human continued for some time, and the small housefly would also come when Boone called his name. Boone reminded himself first that inherently, Freddie the fly and himself as living beings were inseparable parts of an interrelated, interfunctioning, and all-including Totality. Second, he knew that neither the fly nor he were originating causes for anything but were instead individual living expressions of a universal divine Cause or Mind that was ever speaking and living itself through each of them and through everything else.

He was to discover, as he had with other creatures, that much was to be learned by "silently talking across to him. Not as to 'a fly' with all the limiting and condemning things that we humans usually fasten on flies, but as to an intelligent fellow being." In order to truly appreciate Boone's experience with Freddie, we seem to be required to adopt a shift in consciousness. The experience can be viewed as a bizarre and isolated experience with an insect, or it can be understood as communication between two expressions of God.

Becoming Aware: All Beings Are God's Purpose in Action

Communication between beekeepers and their bees has a long history in Europe. When a beekeeper died, it was the custom to let the bees know, in a ceremony called telling the bees. Sometimes the beehive was draped in black crepe. Following this ancient custom, after Sam Rogers, a cobbler and postman of the Shropshire village of Myddle, England, died, his children walked around his fourteen hives and told his bees. Newspapers reported that shortly after relatives of Rogers gathered at his grave, thousands of bees from Rogers' hives more than a mile away came and settled on and about the coffin. The bees entirely ignored the flowering trees nearby. They stayed for about half an hour and then returned to the hives.

If the awareness of any creature, regardless of size or form, is simply an expression of the universal consciousness, then perhaps it should not surprise us that a research chemist would attribute his success in the laboratory to his ability to gain rapport with the bacteria and other forms of micro-organisms with which he worked.

This was the case with J. William Jean, who acquired a considerable reputation for the many unusual and useful things he produced in his Pasadena, California, laboratory. His success arose from his firm conviction that all beings, regardless of how humans are accustomed to define and classify them, are God's purpose in action. The second was his mental attitude toward his tiny business partners: an attitude of friendliness, admiration, respect, encouragement, and limitless expectancy. As well, he was able to understand and co-operate with them, and as a result the bacteria and his other micro-organic associates reacted favorably to this kind of treatment.

Apparently, Jean's spirit of high adventure in his work and his friendly identification with everything that lives allowed him to make practical and successful use of invisible bridges for helpful two-way thought traffic between himself and his tiny workers. These were both mental bridges, between intelligences, and intuitive bridges, built upon that speech that does not have to be uttered.

How To Win Friends And Influence People Using Robots

To Beat The 'Throwaway' Waste Crisis, We Must Design Loveable Objects – That Last

Talking to and Understanding Animals

Newspapers have for several years reported on a young Brazilian youth, Francisco Duarte, who is allegedly able to give instructions to all kinds of animals and insects. Small for his age and considered mentally retarded, Duarte handles spiders, wasps, bees, snakes, frogs, rats, and alligators without being bitten or even attacked. Further, according to Alvaro Fernandes, a Brazilian parapsychology investigator, all the animals obey the instructions given to them by the youth.

According to the reports of Francisco and those provided by investigator Martha Barros, bees, for example, will land where Duarte tells them to, and if he tells all the bees except six, to return to the hive, that is what happens. Poisonous snakes will coil, uncoil, or move to where he tells them, and fish will come to his hand in the water when he tells them to do so. Duarte told reporter Michael Joy, "I talk to the animals, and they talk to me. I can understand everything they say. My talent is a gift from God."

Secret of Life: There is Continuous Communication

The secret of life is that there is continuous communication not only between living things and their environment but among all things living in the environment. An intricate web of interaction connects all life into one vast, self-maintaining system.

"There is life on earth," biologist Lyall Watson tells us in Supernature, "one life, which embraces every animal and plant on the planet. Time has divided it up into several million parts, but each is an integral part of the whole. A rose is a rose, but it is also a robin and a rabbit. We are all part of one flesh, drawn from the same crucible."

The evidence on hand indicates that there is an awareness beyond the so-called normal senses. This awareness puts the subject not only in contact with his or her immediate environment but also with things and events at some distance. If this is the case, then life, regardless of the form it takes, is part of a universal and unifying consciousness.

Each thing is related to everything else, and each Life form can, to some lesser or greater degree, affect and be influenced by everything in the universe.

Life Song - In Harmony With All Creation
by Bill Schul.

Life Song deals with interspecies communication, an adventure in awareness and how human life may be enriched through it. Communication with other creatures and life forms than ourselves may not only be important but critical to our survival. Life Song suggests that the lack of interspecies communication reveals a failure to grasp an awareness of the connectednesss of all life, that everything is related to everything in existence.

Dr. Bill Schul (1928-2010), a social psychologist and journalist, had a lifetime interest in animals, plants, and interspecies communication. He was an experienced rancher, farmer, and gardener. He is the author of eleven books, including the bestseller, The Secret Power of Pyramids, and more than 200 articles exploring the unexplained phenomena occurring in our daily life. He is the recipient of a number of awards. by Arshin Adib-Moghaddam
At the heart of the development of AI appears to be a search for perfection. And it could be just… by Prasenjit Mitra
In 2013, my student and I at Penn State built a bot to write a Wikipedia article on Bengali Nobel… by Chris Impey
Surveys show that nearly half of Americans believe that aliens have visited the Earth, either in… How To Tell If Your Digital Addiction Is Ruining Your Life

by Terri R. Kurtzberg
The fear that digital distractions are ruining our lives and friendships is widespread.