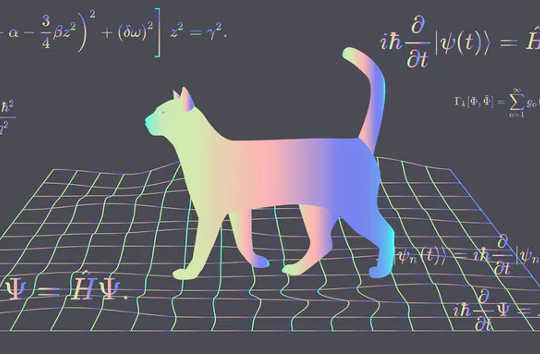 Have you ever been in more than one place at the same time? If you’re much bigger than an atom, the answer will be no.

But atoms and particles are governed by the rules of quantum mechanics, in which several different possible situations can coexist at once.

Quantum systems are ruled by what’s called a “wave function”: a mathematical object that describes the probabilities of these different possible situations.

And these different possibilities can coexist in the wave function as what is called a “superposition” of different states. For example, a particle existing in several different places at once is what we call “spatial superposition”.

It’s only when a measurement is carried out that the wave function “collapses” and the system ends up in one definite state.

Generally, quantum mechanics applies to the tiny world of atoms and particles. The jury is still out on what it means for large-scale objects.

In our research, published today in Optica, we propose an experiment that may resolve this thorny question once and for all.

In the 1930s, Austrian physicist Erwin Schrödinger came up with his famous thought experiment about a cat in a box which, according to quantum mechanics, could be alive and dead at the same time.

In it, a cat is placed in a sealed box in which a random quantum event has a 50–50 chance of killing it. Until the box is opened and the cat is observed, the cat is both dead and alive at the same time.

In other words, the cat exists as a wave function (with multiple possibilities) before it’s observed. When it’s observed, it becomes a definite object.

What is Schrödinger’s Cat?

After much debate, the scientific community at the time reached a consensus with the “Copenhagen interpretation”. This basically says quantum mechanics can only apply to atoms and molecules, but can’t describe much larger objects.

Turns out they were wrong.

In the past two decades or so, physicists have created quantum states in objects made of trillions of atoms — large enough to be seen with the naked eye. Although, this has not yet included spatial superposition.

How does a wave function become real?

But how does the wave function become a “real” object?

This is what physicists call the “quantum measurement problem”. It has puzzled scientists and philosophers for about a century.

If there is a mechanism that removes the potential for quantum superposition from large-scale objects, it would require somehow “disturbing” the wave function — and this would create heat.

If such heat is found, this implies large-scale quantum superposition is impossible. If such heat is ruled out, then it’s likely nature doesn’t mind “being quantum” at any size.

If the latter is the case, with advancing technology we could put large objects, maybe even sentient beings, into quantum states. 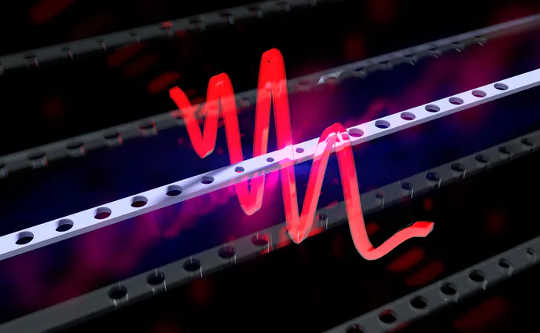 This is an illustration of a resonator in quantum superposition. The red wave represents the wave function. Christopher Baker, Author provided

Physicists don’t know what a mechanism preventing large-scale quantum superpositions would look like. According to some, it’s an unknown cosmological field. Others suspect gravity could have something to do with it.

This year’s Nobel Prize winner for physics, Roger Penrose, thinks it could be a consequence of living beings’ consciousness.

Over the past decade or so, physicists have been feverishly seeking a trace amount of heat which would indicate a disturbance in the wave function.

To find this out, we’d need a method that can suppress (as perfectly as is possible) all other sources of “excess” heat that may get in the way of an accurate measurement.

We would also need to keep an effect called quantum “backaction” in check, in which the act of observing itself creates heat.

In our research, we’ve formulated such an experiment, which could reveal whether spatial superposition is be possible for large-scale objects. The best experiments thus far have not been able to achieve this.

Finding the answer with tiny beams that vibrate

Our experiment would use resonators at much higher frequencies than have been used. This would remove the issue of any heat from the fridge itself.

As was the case in previous experiments, we would need to use a fridge at 0.01 degrees kelvin above absolute zero. (Absoloute zero is the lowest temperature theoretically possible).

With this combination of very low temperatures and very high frequencies, vibrations in the resonators undergo a process called “Bose condensation”.

You can picture this as the resonator becoming so solidly frozen that heat from the fridge can’t wiggle it, not even a bit.

We would also use a different measurement strategy that doesn’t look at the resonator’s movement at all, but rather the amount of energy it has. This method would strongly suppress backaction heat, too.

But how would we do this?

By measuring the energy of the light particles coming out, we could determine if there was heat in the resonator.

If heat was present, this would indicate an unknown source (which we didn’t control for) had disturbed the wave function. And this would mean it’s impossible for superposition to happen at a large scale.

The experiment we propose is challenging. It’s not the kind of thing you can casually set up on a Sunday afternoon. It may take years of development, millions of dollars and a whole bunch of skilled experimental physicists.

Nonetheless, it could answer one of the most fascinating questions about our reality: is everything quantum? And so, we certainly think it’s worth the effort.

As for putting a human, or cat, into quantum superposition — there’s really no way for us to know how this would effect that being.

Luckily, this is a question we don’t have to think about, for now. Angels on the Road: Trust Me, I Have Your Back!

by Joyce & Barry Vissell
If we only knew how many times we are rescued by divine intervention, we would completely trust…

The Maya and Our Contemporary Search for Meaning