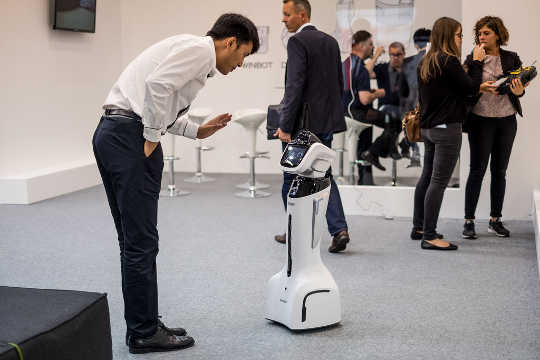 Over the past century, American schools have integrated an ever-more-diverse group of students. Racial integration is most prominent, but it’s not just Native Americans, blacks and Latinos who have been brought into public education.

Schools today serve children with conditions on the autism spectrum, Down syndrome and many other medical issues. But there is one group of children who still cannot attend school: those with serious chronic illnesses.

These homebound students, who may have cancer, heart disease, immune system disorders or other illnesses, appear to be the last excluded population in the U.S. education system. Until recently, there has not been a way to include them in school without great risk to their health. Technology has given us a new, powerful option to finally include these students – the telepresence robot.

Telepresence robots allow their users to see, hear, move around and interact in real time with people in faraway places. They offer a way to finally include chronically ill children in traditional school learning environments. The homebound child operates the robot from home, setting a rolling camera-speaker-screen in motion to engage in small group discussions, travel from classroom to classroom, join friends at recess or lunch break and even attend after-school and extracurricular activities, such as choir or Boy Scouts.


Robot avatars in the classroom.

Our initial research shows that the robots help students overcome isolation and are accepted by most classmates. And crucially, they help students keep up with their peers in schoolwork.

There are as many as a million American students homebound because of severe illness. They are not covered by any federal education guidelines and state guidelines are inconsistent. Even the sweeping federal Individuals with Disabilities Education Act ignores this group of students.

Often, the best these students can hope for is that their school district will send a traveling teacher to their home to provide individual tutoring for one to five hours per week. While this is better than nothing, it is not even close to an adequate substitute for the educational and social benefits of daily participation in the classroom.

Home instruction services do not typically take into account homebound students’ overall academic or social needs. We were recently contacted by an attorney in New Jersey representing a 16-year-old student with multiple illnesses. The student is expected to be out of school for more than one full academic year. His school district has refused to allow school attendance via robot. His parents are so concerned about their son’s isolation they have gone to court to try to force a change.

Robots can really help sick students. Daniel is a sixth grader with cancer whose case we reviewed. He was too ill to attend class, and his family had trouble paying for childcare during the day while his parents were at work. As a result, he spent most days at home alone. He was failing in school, completely isolated from his friends and became depressed.

Daniel’s first school district would not allow him to use a telepresence robot, so his family moved to a school district that would. When he started to attend school from home via robot, he thrived. He caught up in school, passed sixth grade, enjoyed “hanging out” with his classmates and started to feel much more optimistic about life.

The classmates of chronically ill children like Daniel appear to benefit as well. Students don’t have to wonder what happened to their classmate, or experience a long absence as something like a disappearance. And the homebound student can continue contributing to the classroom environment. In addition, of course, all students – and teachers – get firsthand experience with innovative robotic technology.

Technology is the solution and the problem

One reason telepresence robots aren’t more widely used may be financial. Schools receive state and federal funding based on the average daily attendance of the students they serve. In a number of states, home instruction services are included as part of that calculation, but school attendance via telepresence robot is not.

In California, for example, if a district sends a tutor for a total of five hours per week to a student’s house, the district will get the same amount of money as if that student were in class for five full days. Just one hour of home instruction is considered equivalent – for funding purposes – to a full day of school attendance. And California districts do not receive any funding for students using telepresence robots, even if a student were to use a robot to attend class all day every day of the week.

However, we have found that the biggest reason for not using the robot is fear of risk. Many school districts tell us they are worried that the robot’s camera, which projects classroom events but does not record them, could allow parents or other adults in the home to observe classroom instruction and perhaps critique it. The technology that helps a homebound student attend school also creates concerns about teacher and classmate privacy. Educators need to understand the technology and find ways to ensure student privacy in both the home and the classroom.

Telepresence robots are not a panacea to solve all the problems of homebound children with chronic illnesses. But they offer a way to allow these children to remain in school and connected to their classmates. Research suggests that social connectedness contributes to chronically ill children’s well-being.

The time and the technology are ripe to include these students in their local schools at long last. Federal, state and local education officials will all need to act together to end this segregation. If educators and policymakers believe chronically ill students have a right to attend their local schools via robot, they will create legislation and policies that meet the learning needs of these students. Recently a bill was introduced in the Maryland state legislature that would help public schools purchase telepresence robots or other remote-participation systems for chronically ill students who are not able to attend class in person.

Next, schools and scholars will have to evaluate how well they work. As these robots become more widely used, formal objective studies of their use in schools should help teachers and administrators feel more comfortable using the systems, and allay privacy and other concerns about allowing two-way video access into classrooms. History shows that every time a new group of students is integrated into public classrooms, all children benefit.