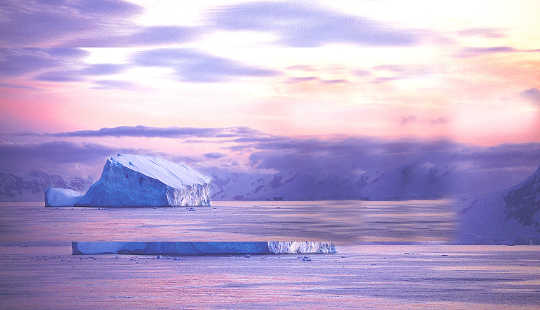 A new explanation for the origin of Antarctica links two competing theories.

It’s one of the big mysteries in the scientific world: how did the ice sheets of Antarctica form so rapidly about 34 million years ago, at the boundary between the Eocene and Oligocene epochs?

These are the two theories:

Climate change: The first explanation is based on global climate change: Scientists have shown that atmospheric carbon dioxide levels declined steadily since the beginning of the Cenozoic Era, 66 million years ago. Once CO2 dropped below a critical threshold, cooler global temperatures allowed the ice sheets of Antarctica to form.

Ocean currents: The second theory focuses on dramatic changes in the patterns of ocean circulation. The theory is that when the Drake Passage (which lies between the southern tip of South America and Antarctica) deepened dramatically about 35 million years ago, it triggered a complete reorganization in ocean circulation.

A group of researchers, led by scientists in McGill University’s department of earth and planetary sciences, now suggests the best way to understand the creation of this phenomenon is, in fact, by linking the two explanations.

In a paper published in Nature Geoscience they argue that:

The deepening of the Drake Passage resulted in a change in ocean circulation that resulted in warm waters being directed northwards in circulation patterns like those found in the Gulf Stream that currently warms northwestern Europe.

That this shift in ocean currents, as the warmer waters were forced northward, lead to an increase in rainfall, which resulted, beginning about 35 million years ago to reduced carbon dioxide levels in the atmosphere. Eventually, as the levels of carbon dioxide in the atmosphere dropped as a result of a process known as silicate weathering (whereby silica-bearing rocks are slowly worn away by rainfall leading the carbon dioxide from the atmosphere to eventually becomes trapped in limestone), there was such a significant drop in CO2 in the atmosphere that it reached a threshold where ice sheets could form rapidly in Antarctica.

Coauthor Galen Halverson of McGill believes that no one has thought of combining the two theories before because it’s not an intuitive idea to look at how the effects of changing patterns of ocean circulation, which occur on time scales of thousands of years, would effect global silicate weathering, which in turn controls global climate on time scales of 100s of thousands of years.

“It’s an interesting lesson for us when it comes to climate change,” says Halverson, “because what we get is a thumbnail shift between two stable climatic states in Antarctica—from no glaciers to glaciers. And what we see is both how complex climate changes can be and how profound an effect changing patterns of ocean circulation can have on global climate states, if looked at on a geological time scale.”

Funding came from the Canadian Foundation for Innovation, the Canadian Institute for Advanced Research, and the Natural Sciences and Engineering Research Council of Canada. Your Gift-Giving Guide for a Pandemic-Altered Holiday

by Vicky Oliver
As the pandemic restricts plans, long distance trips to visit relatives or meals with family and…