How One Dark Corner Of The Internet Is Spreading Its Hate 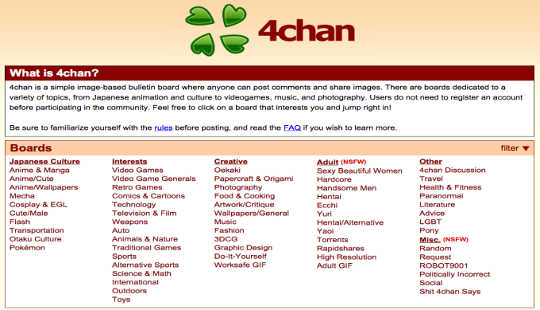 The internet is full of dark places. There are websites where people gather to share illegal images, buy illicit drugs and air offensive opinions that wouldn’t be tolerated on most mainstream sites. But just as the memes and jokes that originate on forums such as 4chan spread to the wider internet, the hatred expressed there doesn’t stay put either.

4chan’s Politically Incorrect or “/pol/” board, in particular, has become a home for the so-called alt-right brand of white nationalism. It was a central part of the online support for Donald Trump in the US election. But it is also a place where users organise campaigns of abuse and trolling on other websites.

While 4chan is increasingly reported on by mainstream media, we know little about how it actually operates and how instrumental it is in spreading hate on other social platforms. That’s why my colleagues and I decided to study /pol/ – analysing 8m posts posted since June 20, 2016 – in an attempt to measure some of the impact it’s having on the rest of the internet.

4chan is an imageboard site, built around a typical bulletin-board model where users post images related to each board’s specific theme and other users can reply with comments or more images. Two of 4chan’s most important aspects are anonymity (users don’t have a public profile) and ephemerality (inactive threads are routinely deleted).

4chan currently features 69 boards, split into seven high level categories, including Japanese Culture and Adult. The declared purpose of the Politically Incorrect board is for “discussion of news, world events, political issues, and other related topics”. But there are, arguably, two main characteristics of /pol/ threads. One is its aggressive and racist tone, and use of offensive and derogatory language. This characterises its links to the alt-right movement, which rejects mainstream conservatism as well as immigration, multiculturalism and political correctness.

The other interesting characteristic is the substantial amount of original content and online culture it generates. Most notably it turned the minor comic book character “Pepe the Frog” into a meme and symbol for the alt-right.

Another important aspect of /pol/ is its reputation for coordinating and organising so-called raids on other social media platforms. Raids are somewhat similar to distributed denial of service (DDoS) attacks used by hackers to bring down websites. But rather than aiming to interrupt the service at a network level, they attempt to disrupt a site’s community by actively harassing users or taking over the conversation.

In summer 2016, /pol/ users launched “Operation Google” in response to the search engine’s introduction of anti-trolling technology to push sites with offensive language further down its page listings. Users began replacing hate words with the names of large tech companies, for example using “Google” and “Skype” to replace racist words for black and Jewish people. Our study showed that Operation Google had a substantial impact on /pol/ and is still somewhat in effect. But its effect beyond 4chan itself was actually quite limited and less prevalent than was reported at the time.

We then explored raiding behaviour on other social media platforms. Abusive language seem to be such a fundamental part of /pol/ that its users presumably feel able to disconnect from the insults directed at them. But cyber-bullying is a genuine problem that can lead to depression, self-harm, and even suicide. So we can’t ignore cases where 4chan’s hate-filled vitriol spreads onto other websites such as YouTube.

We found evidence that certain YouTube videos experienced a peak in commenting activity when they were were linked to on /pol/. What’s more, we found that if the comments were posted shortly after the link first appeared on /pol/, they were more likely to include hate words. In other words, there is statistically significant evidence that /pol/ users are attacking YouTube users through its comments.

Our research analysis also provides an explanation of how some of the key features of 4chan (such as ephemerality and anonymity) influence content and behaviour of the board. For instance, the “bump limit” system ensures that certain threads do not monopolise the conversation, ensuring fresh content is constantly generated.

4chan and /pol/ are continuously evolving. Over the past year, the site has been sold to the founder of a Japanese rival, introduced very mild moderation and is reportedly looking at new ways to monetise the site to deal with its financial struggles. The ephemeral nature of the boards naturally creates shifts in topics and activities, as well as users moving to other, somewhat similar sites such as 8chan.

But the increasingly organised activities of the board’s users and their ability to generate internet-changing content demonstrates the strength of its underlying influence. As the world increasingly looks at 4chan, 4chan will continue to look not so silently back. Does The Internet Really Make You Smarter?

by Deborah Lynn Blumberg for UT Austin
"There are times when people completely disregard the fact that they went online. They think they… by Andrew Moore and Adrian Winckles
The internet is a complex hodgepodge of hardware and software, and the odd jumpy Zoom call is often… by Kira Allmann
Nestled between Lancashire’s stand-out beauty, the Forest of Bowland, and the breathtaking vistas… by James Jin Kang and Paul Haskell-Dowland
With #StayAtHome and social distancing now becoming a way of life, an increasing number of people… by Joshua A.T. Fairfield
Internet-enabled devices are so common, and so vulnerable, that hackers recently broke into a…

by Thom Hartmann
Forgiving student debt is not a slap at anybody; it's righting a moral wrong inflicted on millions…

Mindfulness: The Gateway to a Healthier and More Expansive Brain

by Ora Nadrich
As mysterious as the brain is, mindfulness, I believe, can help us know more about it and the…

by Sam Hunter and Gina Scott Ligon
There’s a military aphorism that generals are always fighting the last war. It’s a natural human…

How Meditation Rewires the Brain for Life-Changing Experience

by Joseph Selbie
We are so much more than we know. We have access to a rich source of vitality, creativity,…