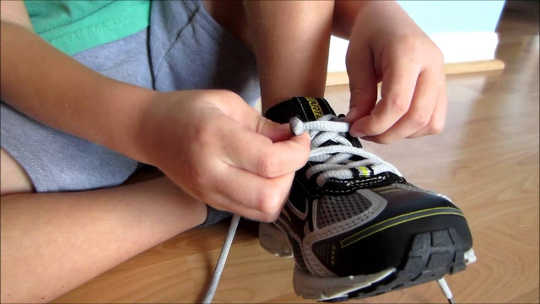 When children learn how to tie their shoelaces, they do so in discrete steps—making a loop or tugging at the lace.

After enough repetition, our brain turns these steps into “chunks.”

Movement chunking, as the phenomenon is known, is a strategy that reduces long strings of information into shorter, more manageable pieces that are easier to remember.

“Chunking is the natural byproduct of a clever strategy that minimizes learning costs.”

Scientists know that for people with Parkinson’s disease, Huntington’s disease, and stroke, this movement chunking is severely disrupted. Understanding chunking and how it works is crucial for early diagnosis, treatment and rehabilitation therapy. Yet, science has no concrete explanation for it.

But now, researchers have developed a comprehensive theory for why chunking occurs. The research frames chunking as an economic tradeoff in the motor system, where merging small chunks becomes optimally “cost-effective” at certain learning stages. The findings appear in the journal Nature Communications.

“The nervous system aims to produce movements as efficiently as possible,” says Scott Grafton, a neurology professor at the University of California, Santa Barbara. “However, there is a computational cost to calculating efficient trajectories. The sweet spot between these goals results in chunks.”

Grafton and colleagues used tools of computational motor control, which produce computer models to discover how the brain controls limbs and the goals and constraints of the motor system. In this context, researchers have had difficulty explaining how humans and other animals transition from computationally simple but inefficient movements to computationally demanding but efficient ones.

“Our study resolves this difficulty by showing—theoretically and experimentally—that the most cost-effective complexity-efficiency learning paths are the ones that produce chunking,” says Grafton. “Therefore, chunking is the natural byproduct of a clever strategy that minimizes learning costs.”

The investigators measured how rhesus macaques produced movement sequences over several days of practice and found that these animals are indeed cost-effective learners. By selecting when to meld chunks together in an intelligent way, the monkeys achieved savings on the cumulative costs of learning.

They divided the movement sequence into chunks, optimized for efficiency within chunks, and then merged chunks only when further gains in efficiency were required.

“Movement chunking has been extensively characterized in health and disease across humans and animals, but until now, a normative theory was lacking,” says Grafton, “Our theory derives optimal movement trajectories, and these experiments in which monkeys learn to produce a novel sequence of movements over an extended period of time demonstrate that our theory explains the essential features of the chunks that emerge in their movements.”

Framing the chunking phenomenon as an economic tradeoff offers a fresh perspective on motor learning and its disorders.

For example, the irregular nature of movements post-stroke may be attributed to lower computational budgets for motor learning, and the inefficient movements seen in stroke may thus be adaptive to these budgets, Grafton explains. Any rehabilitation approach could benefit from this insight, he adds.

“Our computational perspective on chunking also opens up new questions regarding how the brain controls movements,” Grafton says. “In particular, recent evidence for the neural coding of chunking in the brain must be re-examined in the light of computational theories.

“Are neurons coding kinematic decisions, computational budgets or efficiency goals? These are broad open questions for the entire field of motor control.” by Julie Cohen, University of California, Santa Barbara
Invasive insects called Asian shot hole borers are turning up in new areas of California where they… by Julie Cohen, University of California, Santa Barbara
That spicy tuna roll you order at your favorite sushi restaurant may not be tuna at all. Scientists… COVID-19 Has Changed University Teaching: Five Things To Stick With In The Future

by Paul Cowell
In the space of 12 months, students and teachers have radically redefined their roles in higher… by Alexandros Skandalis
There appears to have been a significant rise in virtual reality (VR) offerings in 2020, aiming to…