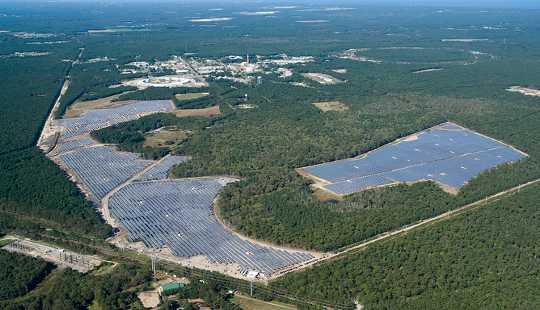 Any long-term solution will require “decarbonizing” the world energy economy – that is, shifting to power sources that use little or no fossil fuel.

How fast can this happen, and what could we do to accelerate this shift?

A look at the history of other infrastructures offers some clues.

The total value of all this infrastructure is on the order of US$10 trillion, or nearly two-thirds of US gross domestic product. Nothing that huge and expensive will be replaced in a year, or even a few years. It will take decades.

Yet there is good news, of a sort, in the fact that all infrastructure eventually wears out. A 2010 study asked: what if the current energy infrastructure were simply allowed to live out its useful life, without being replaced?

The surprising answer: if every worn-out coal-fired power plant were exchanged for solar, wind or hydro, and every dead gas-powered car replaced with an electric one, and so on, we might just stay within our planetary boundaries.

According to the study, using the existing infrastructure until it falls apart would not push us past the 2 degrees Celsius global warming that many scientists see as the upper limit of acceptable climate change.

The problem, of course, is that we aren’t doing this yet. Instead, we’re replacing worn-out systems with more of the same, while drilling, mining and building even more. But that could change.

Historians of infrastructure like myself observe a typical pattern. A slower innovation phase is followed by a “take-off” phase, during which new technical systems are rapidly built and adopted across an entire region, until the infrastructure stabilizes at “build-out.”

This temporal pattern is surprisingly similar across all kinds of infrastructure. In the United States, the take-off phase of canals, railroads, telegraph, oil pipelines and paved roadways lasted 30-100 years. The take-off phases of radio, telephone, television and the internet each lasted 30-50 years.

The history of infrastructure suggests that “take-off” in renewable electricity production has already begun and will move very quickly now, especially when and where governments support that goal.

Solar and wind power installations are currently emerging faster than any other electric power source, growing at worldwide annual rates of 50% and 18% respectively from 2009-2014. These sources can piggyback on existing infrastructure, pumping electricity into power grids (though their intermittent power production requires managers to adjust their load-balancing techniques). But wind and solar can also provide power “off-grid” to individual homes, farms and remote locations, giving these sources a unique flexibility.

Some countries, notably Germany and China, have made major commitments to renewables.

Germany now gets over 25% of its electric power from renewables, helping to reduce its total carbon output by over 25% relative to 1990. China already produces more solar electricity than any other country, with an installed base of over 30 gigawatts and plans to reach 43 gigawatts by the end of this year. In Australia between 2010 and 2015, solar photovoltaic capacity grew from 130 megawatts to 4.7 gigawatts – an annual growth rate of 96%.

Combined with complementary technologies such as electric cars, efficient LED lighting, and geothermal heating and cooling, this transition could move us closer to carbon neutrality.

Could the 30-100-year timeline for infrastructure development be accelerated? Some indicators suggest that the answer may be “yes.”

First, in the case of electricity, only the power sources need replacement; power grids – the poles, wires and other gear that transport electricity – must be managed differently, but not rebuilt from scratch. Second, less developed countries may take advantage of renewable technologies to “leapfrog” almost entirely over older infrastructures.

Similar things have happened in the recent past. Since 2000, for example, cellular telephone networks have reached most of the developing world – and simultaneously avoided the slow, costly laying of vulnerable landlines, which many such places will now never build outside major cities.

The parallel in energy is powering buildings, farms, informal settlements and other points of need with portable solar panels and small windmills, which can be installed almost anywhere with no need for long-distance power lines. This, too, is already happening all over the developing world.

In the developed world, however, the transition to renewables will likely take considerably longer.

In those regions, not only equipment, but also expertise, education, finance, law, lifestyles and other sociocultural systems both support and rely on fossil-fuel-based energy infrastructure. These, too, must adapt to change.

Some – especially the huge coal, oil, and natural gas industries – stand to lose a lot in such a transition. These historical commitments produce determined political resistance, as we see in the United States today.

Energy infrastructure, of course, isn’t the only challenge. Indeed, decarbonization is fraught with enormous technical difficulties.

Insulating older buildings, improving fuel economy, and installing more efficient electrical gear are by far the most cost-effective ways to reduce carbon footprints, but these fail to excite people and can’t be easily flaunted.

Currently and for the foreseeable future, no energy source can be truly “zero carbon,” since fossil-fuel-powered devices are used to mine raw materials and to transport finished products, including renewable power systems such as solar panels or wind turbines.

Electricity is a wonderfully flexible form of energy, but storing it remains a conundrum; today’s best battery technologies require lithium, a relatively rare element. And despite intensive research, batteries remain expensive, heavy, and slow to recharge.

Finally, in many circumstances, burning oil, coal and natural gas will remain the easiest and least expensive means of providing power.

For example, major transport modes such as transcontinental shipping, air travel and long-distance trucking remain very difficult to convert to renewable power sources. Biofuels offer one possibility for reducing the carbon footprint of these transport systems, but many plants grown as biofuel feedstocks compete with food crops and/or wild lands.

Still, the ultimate goal of providing all the world’s energy needs from renewable sources does appear to be feasible in principle. A major recent study found that those needs could readily be met with only wind, water and solar power, at consumer prices no higher than current energy systems.

Where does all this leave us in the run-up to Paris?

On the cultural side, one slogan that could inspire accelerated change may be “energy democracy”: the notion that people can and should produce their own energy, on small scales, at home and elsewhere too.

New construction techniques and the low cost of solar panels have brought “net-zero” homes (which produce as much energy as their inhabitants consume) within the financial reach of ordinary people. These are one component of Germany’s ambitious Energiewende, or the country’s energy transition away from fossil fuels.

In infrastructure history, the take-off phase has often accelerated when new technologies moved out of large corporate and government settings for adoption by individuals and smaller businesses. Electric power in the early 20th century and internet use in the 1990s are cases in point.

In Queensland, Australia, over 20% of homes now generate their own electricity. This example suggests the possibility that a “tipping point” toward a new social norm of rooftop solar has already been reached in some places. In fact, a recent study found that the best indicator of whether a given homeowner adds solar panels to a house is whether a neighbor already had them.

Pieces Of A Puzzle

Many different policy approaches could help, both to reduce consumption and to increase the share of renewables in the energy mix.

Building codes could be gradually adjusted to require that every rooftop generate energy, and/or ratcheted up to LEED “green building” standards. A gradually increasing carbon tax or cap-and-trade system (already in place in some nations) would spur innovation while reducing fossil fuel consumption and promoting the use of renewables.

In the United States, at least, eliminating the many subsidies that currently flow to fossil fuels may prove politically easier than taxing carbon, yet send a similar price signal.

The Obama administration’s Clean Power Plan to reduce carbon output from coal-fired power plants represents the right kind of policy change. It kicks in gradually to give utility companies time to adjust and still-nascent carbon capture and storage systems time to develop. The EPA estimates that the plan will generate $20 billion in climate change benefits, as well as health benefits of $14-$34 billion, while costing much less.

Because greenhouse gases come from many sources, including agriculture, animal husbandry, refrigerants and deforestation (to name just a few), there’s a lot more to decarbonizing the global economy than converting to renewable energy sources.

This article has addressed only one piece of that very large puzzle, but an infrastructure perspective may help us think about those problems as well.

Infrastructure history tells us that decarbonization won’t happen nearly as fast as we might like it to. But it also shows that there are ways to accelerate the change, and that there are tipping-point moments when a lot can happen very fast.

We may be on the brink of such a moment. As the Paris climate negotiations develop, look for inspiration in the many national commitments to push this process forward.

Paul N Edwards, Professor of Information and History, University of Michigan. He writes and teaches about knowledge and information infrastructures. Edwards is the author of A Vast Machine: Computer Models, Climate Data, and the Politics of Global Warming (MIT Press, 2010) and The Closed World: Computers and the Politics of Discourse in Cold War America (MIT Press, 1996), and co-editor of Changing the Atmosphere: Expert Knowledge and Environmental Governance (MIT Press, 2001), as well as numerous articles.