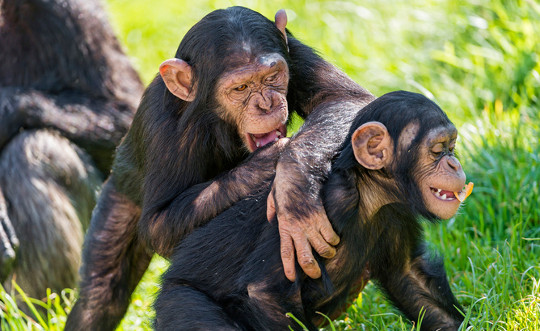 I am always repeating the mantra that we should “work hard and play hard”. But is having fun professionally productive? As someone who studies animal behaviour I sometimes look to my experimental subjects for an answer.

There are many things that give both animals and humans pleasure, such as eating tasty food, but these are not all necessarily fun. When I look at my children I see that fun for them involves playing and scientists who investigate the biology of fun also focus on play.

Evolutionary ecologist Gordon Burghardt, an expert in the field, defines play as:

… repeated, seemingly non-functional behaviour differing from more adaptive versions structurally, contextually, or developmentally, and initiated when the animal is in a relaxed, unstimulating, or low stress setting.

Thus, play is something animals repeatedly do that appears to be without function, such as a cat chasing a ball of string. It can be related to other behaviour (training to hunt, for instance), but tends to be expressed in a more exaggerated manner and only under relaxed conditions.

It is arguable whether or not all animal species play, and the debate goes back to our definition. When we think of animals playing, our minds fill with images of dogs, monkeys and dolphins not those of birds or octopuses. Thus, we think of play as an activity undertaken by species we regard as sociable – and intelligent.

And yet octopuses are some of the smartest creatures in the sea, while parrots and crows can outperform primates in animal cognition tests. But scientists have seen these animals at play too. Does this mean that other, less intelligent animals have fun-free lives?

Humans Have All The Fun

The problem with the word “fun” is it induces anthropomorphism. A bird “skiing” down a snow covered roof looks like fun to us humans. We assume that birds must also do it for fun.

But what looks like fun to us may in fact be the opposite, even in highly intelligent social species. Those wonderful, apparently, coordinated leaps by wild dolphins are often aerial fights. Wave surfing by black swans off the coast of Australia looks like enormous fun, but may just be the most efficient way to get to shore. Or the animals may simply be being dragged along by the laws of physics.

One solution to this problem would be to look at animal brains to determine if they have the same features which permit humans to feel like they are having fun. Unfortunately, we simply do not have this information for the vast majority of species. Thus, we do not know whether fun is restricted to a select group of animals.

Although adults of certain species such as bonobos, domestic dogs or ourselves are known to play, playing is still predominately done by juveniles.

This makes sense, as playing often helps develop and hone the skills necessary for later life. A kitten chases a ball of string to improve its predatory skills, a male baboon play-fights to develop the combat skills needed to climb up in the adult hierarchy, and chimpanzees play with objects to refine the hand-eye coordination skills necessary to use tools and process food.

In humans, there is a very interesting link between playfulness and creativity – something that has not been looked at in animals. Playful people are known for being very innovative. This link is perhaps most well known in the world of art where great composers such as Mozart or innovative painters such as Picasso were known for their playfulness. In science as well there are many cases of this link, for example, the physicist Richard Feynman who said he played at physics and therefore his work was fun. These people generally have the ability to bring together apparently unconnected bits of information to create a new solution to a problem.

In the animal kingdom, within a species, there is a variation in how much individuals play. It would be interesting to see if the more playful ones are the innovators. For example, was “Imo” the first wild Japanese macaque observed washing her food more playful than her peers? And can inducing play increase creativity in animals?

The mantra of my research group will now change slightly to “play hard and work hard” – not only will this make our lives more fun, but, hopefully, we will reap the benefits of increased creativity in our research.

Robert John Young is a Professor of Wildlife Conservation at University of Salford. My research has always been focused on understanding animal behaviour and how it can be used to improve animal conservation and animal welfare. Although, much of his research is applied some of it addresses fundamental questions about how animals communicate, for example.

Animals at Play: Rules of the Game
by Marc Bekoff

Dogs chase each other and wrestle. Cats pounce and bite. These animals may look like they are fighting, but if you pay close attention - as world-renowned biologist Marc Bekoff does - you can see they are playing and learning the rules of their games. In "Animals at Play", Bekoff shows us how animals behave when they play, with full-color illustrations showing animals in action and having fun - from squirrels climbing up a tree to polar bears somersaulting in the snow by Sasha Petrova
Watching cute cat videos and looking at their online pictures may not be a waste of time. A new… Searching for the Key to Happiness?

by Pierre Pradervand
I now feel with such a depth of certainty, of spiritual groundedness that Love is the ultimate…