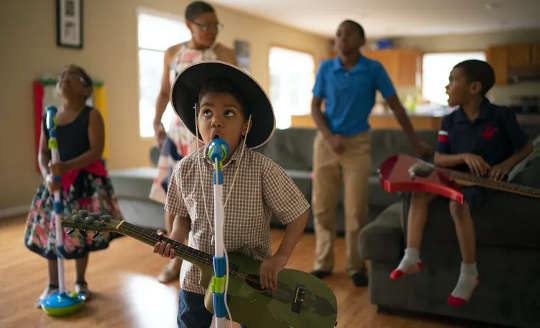 Some children with autism have learned to express themselves emotionally through music. Jeff Wheeler/Star Tribune via Getty Images

Many children with autism struggle to find the words to express how they feel. But when it comes to music, it’s an entirely different situation.

Evidence suggests children with autism may enjoy music and show an early desire for music education.

I am a mother to three young adult sons with high-functioning autism. I got them involved in music from a young age, and they learned to communicate their emotions by playing bassoon, French horn and baritone. As a doctoral student and music teacher, I have seen the emotional transformation from music happen in both my music classroom and my home. I’d like to share what I have learned.

From 2003 to 2018, I owned and operated the Center for Education School of the Arts and Sciences in Tampa, Florida. It was a K-12 school of the arts for students with learning and developmental disabilities.

Everyone in the school was required to join a music group, such as concert band, musical theater, jazz band or chamber ensemble. They all studied in private lessons on their instruments with me, as the school’s music teacher. I saw what I believe to be incredible musical and emotional growth in students with autism after they began to study music.

For example, there was one student who was unable to speak but could hum melodies. I gradually realized that she hummed different tunes for the emotions she was feeling, even though she couldn’t communicate them verbally. Her eyes always matched her emotions as she hummed the story she couldn’t tell.

Another student with Asperger’s disorder took private piano and composition lessons with me. He could talk, but he couldn’t explain how he felt. On days he felt sad, he played a piece of music he had composed to express it. Likewise, he had composed pieces for happy, angry and lonely.

Studies show that children with autism can understand both simple and complex emotions in music and are more responsive to sensory stimulation compared with other children – especially in music, even over speech or noise. This may explain why some children with autism are musical savants.

Music can have a positive impact on children with autism in several ways. Educators can use songs to reinforce speech in students with autism that struggle with language. One technique is to sing with vocabulary cards in order to teach vocabulary skills. Research shows that singing can considerably improve language skills in students with a type of autism that has language delays.

Educators can also use music to help a child with autism recall important information when the information is linked with a musical sound, like a melody or rhythm. One critical study found that music can be used to focus students’ attention, keep those with disabilities on track and decrease their anxiety from stress. Just as important, providing opportunities for positive emotional responses to music for children with autism can help them reach their social and language goals.

Consider teaching from an elemental perspective

The musical elements are pitch, melody, harmony, rhythm, timbre, structure, texture and expression. When children hear a piece of music, the combined musical elements are inside it. However, some children with autism have auditory sensitivity, causing them to experience a lack of tolerance to everyday sounds, which can impact their ability to handle loud or complex music.

One way to assist children who struggle with this sensitivity is to simplify their music by using separate musical elements. Let me share one possible teaching example. Beginning with a song, the educator could teach in stages by isolating pitches on the piano first. As the student becomes comfortable with the first element, the educator could slowly introduce the others one at a time.

If one element became too much for the child to tolerate, the educator would remove that element from the mix.

Once the child could accept all the elements, that would signal that the child was listening to whole music, was ready to move to more challenging music and could begin again with the element cycle. Using this strategy, both the educator and the child learn what musical sounds the child can handle.

Educate your child with music online

Resources are available online for use with children with autism. They are exciting programs and easy to obtain. To introduce your late elementary or older child to the orchestra’s instruments and timbres, I recommend: