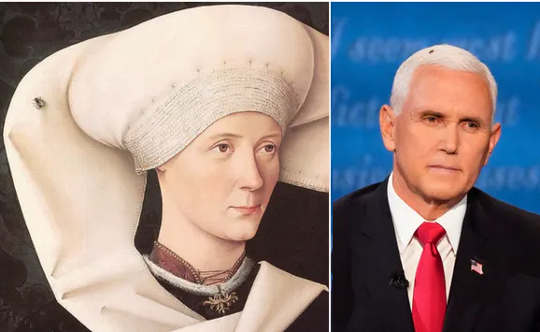 ‘Portrait of a Woman of the Hofer Family,’ Swabian artist, c. 1470, and a picture showing a fly on U.S. Vice-President Mike Pence during the Oct. 7, 2020 debate at University of Utah in Salt Lake City. (Wikimedia Commons/AP Photo/Julio Cortez)

After this week’s vice-presidential debate in the United States, the fly that landed on Vice-President Mike Pence’s head was more of a sensation than the details of the debate — at least on social media. The fly has already been immortalized as a Biden/Harris fly swatter (sorry, they’re all sold out) and sparked a Halloween costume.

In many circumstances, flies are unremarkable. That’s probably why a French word for spy is connected to the same word for fly, mouche. When a fly becomes famous, it’s worth wondering why.

Flies have long held symbolic meaning in the history of art. In portraits made in Renaissance Europe, the presence of a fly symbolizes the transience of human life (buzzbuzzpfft!). In the great scheme of things, our lives are no longer than that of a fly. For me as an art historian, the fly was a moment to reflect not only on the history of flies in western painting, but to begin considering what the long history of this symbolism may reveal about why the fly generated so much buzz.

Take, for example, an extraordinary little painting known today as Portrait of a Woman of the Hofer Family, painted in about 1470 by an artist from the German (Swabian) School, now in the National Gallery in London. Her elaborate white head covering highlights a perfect little fly, that’s settled on her just to remind us that our life, like hers, is impermanent.

The corollary is that we’re supposed to do the best we can with the time we’ve got. When it comes to time and eternity, as painter and poet William Blake wrote: “Am not I / A fly like thee? / Or art not thou / A man like me?” The fly is a little reminder of humility.

Painters could also include a fly to draw attention to themselves, demonstrating with their “trompe-l’oeil” (deceiving the eye) tricks that they could paint in a manner that seemed so real, a viewer of the portrait would be tempted to try to swat the fly away. The 16th-century Italian painter Giorgio Vasari, biographer of Italian Renaissance artists, tells a story about the painter Giotto fooling his teacher Cimabue by adding a realistic-looking fly to a painting.

Salvador Dalí, who was pretty much the lord of the flies (he painted them a lot) included a fly on the watch face of his painting The Persistence of Memory (now housed at the Museum of Modern Art in New York). He also used an army of ants to signify the decay of time and life’s impermanence.

‘Portrait of a Carthusian’ (1446), by Petrus Christus, oil on wood. Held at the Metropolitan Museum of Art, New York. (Wikimedia Commons), CC BY

All is not not what it appears

Portrait of a Carthusian, the most famous portrait featuring a fly, now in the Metropolitan Museum in New York, was painted by Petrus Christus in 1446. It depicts a bearded monk.

Can The Cruise Industry Really Recover From Coronavirus?

The Myth Of The Disappearing Book

The fly perched on the ledge in front of him signifies we’re entering a zone where all is not what it appears: we might say that what seems real is only an illusion. Or, perhaps the artist has enhanced “the quality of the subject’s ‘real’ presence by the fly resting momentarily on the fictive frame,” according to the museum.

Entomologist Ron Cherry has explored how insects have long-standing mythological associations with death. In Renaissance thought, which tended to blend medieval fabulist tales about nature with ideas about religion, flies were considered to represent supernatural power, mostly associated with evil and corruption, because they seemed to be spontaneously born from decaying fruit and rotting organic matter.

In the book of Exodus in the Bible, God mustered swarms of flies as punishment. They were harbingers of worse things, like pestilence and death. That’s a lot of deliverables for a bunch of tiny flies.

The point is that flies still remind us of unpleasant things, or as commentator David Frum noted, unpleasant things in a presidency we’d rather ignore — which is why, I suspect, given the administration’s record, some people found it so delightful. Just Say NO to Negativity!

by Jude Bijou, M.A., M.F.T.
When we don't express our anger constructively, we go negative with our judgments and feel mad…

The Shocking Truth About Happiness

by Barbara Berger
Looking back, I see how much of my life I spent worrying about stuff or being nervous and insecure…