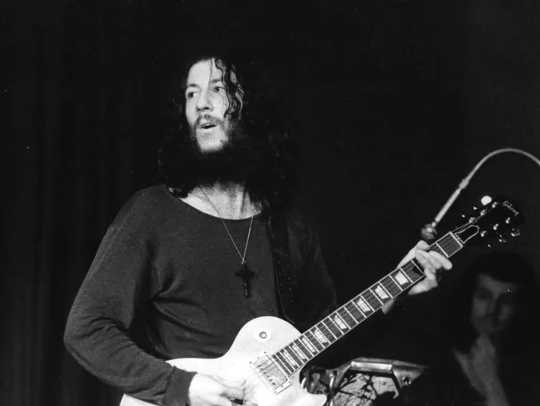 One of rock’s clichés, originating in a Neil Young song lyric, is that “it’s better to burn out than to fade away”. And indeed, many of its most celebrated casualties – from Jimi Hendrix to Kurt Cobain – departed the stage in sudden, shocking fashion thanks to tragic premature deaths. But even those whose play-out was lengthy, after a brief initial burst, can leave a hefty legacy.

Such was the case for Peter Green, founder of Fleetwood Mac, who passed away on July 25 aged 73, leaving an indelible stamp on generations of guitar players based primarily on a core body of work between 1966 and 1970.

Born Peter Greenbaum in 1946, the youngest son of an East End Jewish family – and, like many of his generation, transfixed by imported blues records from America – he emerged just after the initial wave of British blues-rock guitar heroes – notably the celebrated triumvirate of Eric Clapton, Jeff Beck and Jimmy Page.

He made his name by filling Clapton’s shoes in John Mayall’s Bluesbreakers – a kind of academy and clearing house for many who would move on to some of the biggest rock acts of subsequent decades. Having substituted for Clapton on the occasional gig, Green took up a place in the band when Clapton left to form Cream. Green, in his turn, would be replaced in the band by Mick Taylor, before Taylor joined the Rolling Stones in 1969.

Replacing Clapton was a daunting task for Green. Clapton’s fan-base among London’s blues aficionados was vocal – famously demonstrated by the graffiti “Clapton is God” that appeared on a wall in London at the time.

Green rose to the challenge, however, stamping his mark on the next Bluesbreakers album, A Hard Road (1967), both as a singer, and with instrumental compositions such as The Supernatural that established him as an eminent instrumentalist in his own right.

Importantly, he did this by veering away from the overt virtuosity of the other guitar heroes of the day. As Mick Fleetwood would put it:

He went immediately for the human touch, and that’s what Peter’s playing has represented to millions of people – he played with the human, not the superstar touch.

A key tension within Green’s career – and personality – was between ambition and independence, on the one hand, and diffidence and fragility on the other. This was clear when, keen to set up his own group, he split from the Bluesbreakers after one album – taking drummer Mick Fleetwood and, later, bassist John McVie with him – but naming the new band Fleetwood Mac after his rhythm section and sharing lead guitar and vocal duties with new recruit Jeremy Spencer.

In this new outfit, his capacity for innovation came to the fore. A series of hits drew on his growing confidence as a songwriter and pushed the boundaries of the blues. Others, including Clapton, drove the role of the “guitar hero” forward through ever-lengthier expositions of fretboard dexterity. But Green, despite his technical ability, focused on the more nebulous merits of “feel” and “tone”, eventually making these indispensable facets of the rock guitar arsenal. He would recall,

Playing fast is something I used to do with John Mayall when things weren’t going very well. But it isn’t any good. I like to play slowly and feel every note.

A trip too far

But in his songs, the fractiousness of The Green Manalishi (With The Two Prong Crown) – its sonic density a forerunner of heavy metal – and the uncertainty of Man of the World, evidenced a growing unease that would crash his career. On tour in 1970, following an LSD trip at a commune in Germany – one of several he took – he abruptly quit the band, unable to cope with his growing fame.

Fleetwood Mac would spend the next few years with a rapidly rotating line-up – including a brief return by Green to help them complete a tour after Jeremy Spencer left to join a cult. They relocated to America and, having recruited Lindsey Buckingham and Stevie Nicks, delivered one of the defining albums of the 1970s: the hugely successful Rumours.

Green himself struggled. Like Pink Floyd founder Syd Barrett, whose band achieved stratospheric success after his own LSD-exacerbated mental illness precipitated his departure, Green made occasional recordings in the early seventies, but never found his equilibrium.

Later diagnosed with schizophrenia he oscillated between stints as a gravedigger and hospital porter. There were episodes of erratic behaviour – trying to give away all of his money – and spells in psychiatric hospitals, where he received electroconvulsive therapy.

He re-emerged sporadically, first with solo recordings in the 1980s and then, on a series of albums with The Splinter Group in the late 1990s and early 2000s. Leaning heavily on standards and cover versions, and garnering a respectable, if sympathetic, following, they rarely troubled the upper reaches of the charts, or recaptured his earlier fire.

If the headlines mainly remembered Green as a tragic figure, like other innovators of his generation that were brought low by drugs and collapse, his quiet influence was much deeper. Not the first, or most famous, of the British guitar heroes, his emphasis on tone, economy and space nevertheless shaped the vocabulary of rock guitar.

The likes of Jimmy Page and Gary Moore – the latter of whom recorded an album of Green’s songs – attested to his impact. No less a luminary than BB King would remark: “He has the sweetest tone I ever heard; he was the only one who gave me the cold sweats.” Two Of Us: Inside John Lennon's Incredible Songwriting Partnership With Paul McCartney

by Adam Behr
John Lennon was acutely aware of his place in the musical lineage, and the strengths and weaknesses… To Really Choose a Man

by Joyce Vissell
To really love a man is to choose him over and over again. It’s not enough to say marriage vows one…

by Barb DePree, MD
As women at midlife, we understand our priorities. We’ve demonstrated how good we are at…

Creating A New Worldview and Culture: Women Are The Future

by Ariane Burgess
The Dalai Lama caused quite a stir at the 2009 Peace Summit in Vancouver. He said that “the world…