Why Are Most People Right Handed? 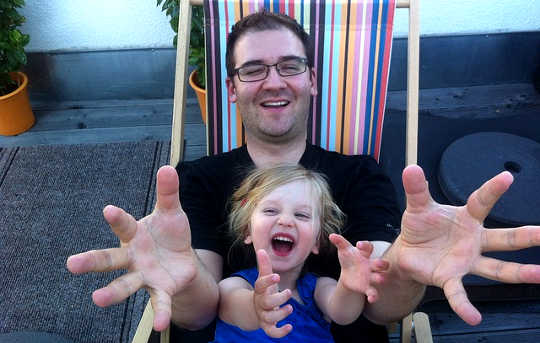 Roughly 90% of humans are right-handed and this is one of the traits that separates us from most other primates who don’t really show any overall preference for left or right handedness.

It’s believed that handedness played an important role in human evolution, with a recent study on the earliest evidence of right-handedness in the fossil record shedding light on when and why this trait arose. Interestingly, the clues were found not in our ancient hands, but in our ancient teeth.

We have long known that the human brain is composed of two roughly similar halves. The left hemisphere controls language and motor abilities, whereas the right hemisphere is responsible for visual-spatial attention.

It is less well known that brain lateralisation, or the dominance of some cognitive processes in one side of the brain, is a distinctive feature of humans, and one associated with improved cognitive ability.

Could handedness have played a role in brain lateralisation? Ancient stone tools made and used by our earliest ancestors reveal some clues.

The earliest stone tools date to 3.3 million years ago and were found in modern day Kenya, Africa. Early stone tool making would have required a high level of dexterity. We know from experiments that have replicated tool-making processes that the brain’s left hemisphere, which is responsible for planning and execution, is active during this process.

At the same time, humans are overwhelmingly right-handed when it comes to tool making compared to other species. This is most likely because the left and right hemispheres control motor action on the opposite sides of the body.

While this relationship is not straightforward, it would appear that, in most cases, handedness and brain lateralisation go hand in hand (pun intended).

So why use teeth to investigate handedness? The answer lies in the scarcity of matching left and right arm bones in the fossil record, particularly those belonging to our earliest ancestors.

Without matching left and right sets, it is impossible to examine differences in size and shape to determine which hand an individual favoured when completing manual tasks.

Teeth, on the other hand, tend to survive relatively well in the fossil record and can preserve scratches, or “striations”, that establish handedness.

In an earlier study, researchers noted striations on the front side of teeth belonging to European Neanderthals. They hypothesised that these marks were made when material was held in one hand and gripped between the front teeth and worked by the other hand with a stone tool, with the stone tool occasionally striking these teeth.

The subject of the new study – an ancient upper jawbone – provides the oldest evidence for right-handedness known in our genus Homo.

The jawbone belonged to one of our earliest human ancestors, Homo habilis (literally, the “handy man”), who roamed Tanzania in Africa around 1.8 million years ago. The jaw was identified at Olduvai Gorge in the Serengeti Plain, which has yielded some of the earliest archaeological traces in the world.

The authors of the study noted a number of striations on the front side of the teeth. They used high-powered microscopes and digital cameras to investigate these striations, particularly patterning in their direction.

This led the authors to argue that most marks were made with the individual’s right hand. They also suggested that the four front teeth with many right-slanting striations were the focus of most processing activities.

The Homo habilis jaw is important as it provides the oldest evidence for right-handedness in the fossil record. But it is also significant as it suggests that a major level of brain organisation had occurred in humans by at least 1.8 million years ago.

This brain development enabled us to master crucial early skills such as stone tool making and potentially also paved the way for language development. Right-handedness therefore means a lot more to us than simply a preference for using the right hand.

Just some food for thought next time you are brushing your teeth, sending a text message or high-fiving someone.