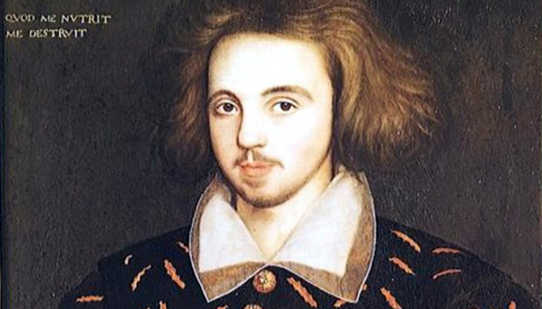 The question of whether Shakespeare truly wrote every word in every scene of his plays has been circulating since the bard’s own lifetime. Wilder conspiracy theories claim the playwright never truly existed, or was only an actor and not a playwright. Literary scholars have debated which plays might have been co-written—and who those unaccredited coauthors might be.

Information scientists at the University of Pennsylvania’s School of Engineering and Applied Science, working with a Shakespeare scholar at De Montfort University, are using a new statistical method to get to the bottom of this question.

In a forthcoming essay in Shakespeare Quarterly, they provide new evidence that all three Henry VI plays contain language written by another author. Their analysis identifies Christopher Marlowe as the likeliest candidate, although other writers may have been involved as well.

One thing is certain: Shakespeare did not write these plays on his own.

Even prior to the advent of computers, literary scholars have attempted to quantify an author’s style in efforts to resolve attribution questions. However, the rigor of available techniques—which often involved manual counting—sparked dispute. Computational approaches reinvigorated the field with the promise of increased reliability and objectivity.

“Using information sciences to answer questions about disputed authorship goes back two decades, and it has grown along with computing power. But our approach is more than just counting,” says Alejandro Ribeiro, associate professor in the department of electrical and systems engineering.

Focus on the little words

Earlier computational approaches have tried to quantify authorial style through vocabulary and usage. Counting the frequency of certain words and comparing them across texts, were used to create profiles of authors’ vocabularies. However, this approach has a flaw—the distribution of words used in a text could be more influenced by its subject than its author.

“A more reliable approach is to use functional, rather than meaningful, words: ‘the,’ ‘and,’ ‘or,’ ‘to,’ and so on,” says coauthor Santiago Segarra. “Everyone has to use these words, so analyzing how they differ between authors gets closer to an objective measure of ‘style.'”

Rather than simply counting the frequency of such words, the Penn team measured their proximity to one another. After constructing a list of between 50–100 functional words that appear in the target texts, the researchers apply an algorithm to derive “word adjacency networks” from them.

Each pair of functional words is given a score based on how many words apart they appear to one another. Together, those scores are remarkably consistent between different texts by the same author, acting as a kind of stylistic “fingerprint.”

“For example,” Ribeiro says, “If we trained this system on a play by me and a play by Santiago, and then gave it another play written by one of us, it could tell which one wrote it 98 percent of the time.”

Knowing the ongoing debates over Shakespearean authorship, the Penn team collaborated with Gabriel Egan, professor of Shakespeare studies at De Montfort, to ensure they were working within the confines of scholarly consensus. For example, scholars now widely accept John Fletcher as coauthor of one of Shakespeare’s later plays, The Two Noble Kinsmen. Some of Shakespeare’s earlier works, such as the Henry VI plays and Titus Andronicus, were thought to be collaborations, but how much and with whom was less clear. This made them good targets for deeper analysis.

The researchers trained their algorithm on the entirety of Shakespeare’s corpus of plays, developing a stylistic fingerprint for him. They also developed fingerprints for several notable contemporaries, including Fletcher, Christopher Marlowe, Thomas Middleton, Ben Jonson, George Peele, and others. Finally, they combined all of the texts from all of the candidates into a single profile, essentially an “average” fingerprint for English-language authors of that era.

The analysis of the word adjacency network fingerprints of the Shakespearean corpus suggested that the three Henry VI plays were stylistic outliers among Shakespeare’s plays. This anomaly made it very unlikely that Shakespare wholly wrote these plays their entirety, confirming results generated by other groups’ computational approaches.

“We’re seeing independent studies with different methodologies converging on the same conclusion,” Egan says.” “The more those independent approaches converge, the more confident we can be.”

Confident that the Henry VI plays were outliers, the next task was to see who else’s stylistic fingerprints they might contain. Christopher Marlowe and George Peele, long thought to have been the unnamed collaborators on Titus Andronicus, were the two leading candidates.

“If you had to pick one candidate, it would be Marlowe,” Segarra says. “If you had to pick two, then you would go for Marlowe and Peele, but in the latter’s case, we don’t have a large enough sample to fully train the classifier. Once you combine this with the historical evidence, Marlowe clearly becomes clearly the preferred coauthor.”

Egan is confident that the historical evidence tips the scales toward Marlowe. “Other investigators using entirely different approaches have recently uncovered evidence that makes Marlowe the prime candidate.”

“There’s a very famous riot scene in Henry VI, Part 2,” Egan says, “where one of the followers of Jack Cade, a revolutionary, says, ‘First thing we do, let’s kill all the lawyers.’ I think that Marlowe was responsible for the Jack Cade scenes. Of course, we don’t know if they sat together and worked as coauthors. Shakespeare may have adapted those passages afterwards, for example.”

By Shakespeare and Marlowe

“It’s fitting that this these questions about language are being tackled at the birthplace of computers, with ENIAC,” Egan says.

“Language is the ultimate ‘big data’ problem, and attributing authorship to its rightful owners is both a technical challenge and, for editors, a moral obligation. It is fitting that a collaboration of twenty-first century writers from different backgrounds and with different but complementary skills should uncover a sixteenth-century collaboration that was likewise diverse in its origin.”