Who Owns Your Tattoo? Maybe Not You 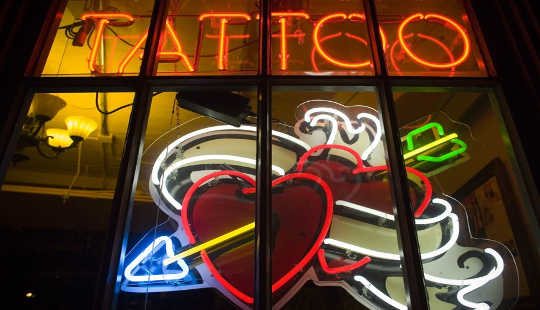 Consult your lawyer before you enter. Thomas Hawk, CC BY-NC

More than 20 percent of all Americans have at least one tattoo, and for millennials that number jumps to almost 40 percent. What could be more intimately a part of you than a work of body art permanently inked into your skin? You probably assume that the tattoo on your body belongs to you. But, in actuality, somebody else might own your tattoo. Recent lawsuits and events have shown that tattoo artists and companies can have intellectual property rights in tattoos worn by others, including both copyright and trademark rights.

Tattoo-related lawsuits are not uncommon. Just this year, a group of tattoo artists for several high-profile athletes, including Lebron James and Kobe Bryant, filed a copyright lawsuit against the creators of the popular NBA 2K video game franchise because tattoos they created appear in NBA 2K16. The case is still pending in a New York federal court.

In 2011, S. Victor Whitmill, the artist who designed and inked Mike Tyson’s facial tattoo, sued Warner Bros. Entertainment, Inc. for copyright infringement; the production company planned to release the film “The Hangover 2,” complete with a scene in which one of the actors received a facial tattoo nearly identical to Tyson’s. The parties ultimately settled before a court could make a determination on the copyright claims.

And the issue isn’t limited to celebrities and athletes. For example, Sam Penix, a coffee shop owner living in New York, was threatened with a trademark infringement lawsuit in 2013 based on the “I [coffee cup] NY” tattoo he has across his fist. Penix’s shop logo featured his tattooed fist grabbing a coffee portafilter between the words “Everyman Espresso.” The New York State Department of Economic Development, which owns the “I ♥ NY” trademark, sent Penix a cease-and-desist letter because it believed the logo infringed its trademark. To avoid being sued, Penix agreed to several terms, including some restrictions on how his fist could (and could not) be photographed.

As director of the Drake University Law School Intellectual Property Law Center, I’ve researched this area extensively. Some complicated legal issues stem from applying traditional law to this nontraditional type of property. Based on current law, the standards set by these cases can affect countless daily activities for people with tattoos, including how they are depicted, photographed or recorded. Despite common sense to the contrary, copyright law and trademark law technically allow for such limitations on a person’s freedom.

Copyrighted art you wear on your skin

If a creation is copyrightable, the default legal standard is that the person who created it owns it.

To receive copyright protection, a creation must meet three requirements: It must be a work of authorship, it must be original and it must be fixed. Under widely accepted theory, tattoos can meet each requirement.

First, the term “work of authorship” includes art. Tattoos, by nearly every interpretation, can be considered art under the law.

Second, regarding originality, courts require that a work be independently created and be “minimally creative.” The Supreme Court has held that most things “make the grade quite easily” under this very low bar. Therefore, tattoo artists who design tattoos themselves will almost always meet this requirement.

Third, “fixation” requires that the work be created on something that a person can see and perceive more than momentarily. Tattoos by their very nature (and to some people’s chagrin) are permanently placed on human skin and can be seen by someone nearby.

Given these basic requirements, a tattoo can be protected by copyright law, and the creator of that tattoo owns the resulting rights. These rights include the ability to keep others from displaying, reproducing or creating new works based on the original tattoo or one that is substantially similar. This would include things like photos, videos and artwork that use the tattoo.

Under trademark law, nearly anything can be a trademark, including words, names, symbols or devices. Trademarks are used to protect the trademark owner’s goodwill and reputation developed through the trademark and to help the public identify where products and services come from.

In some cases, people decide on their own to ink themselves with their favorite company brands. Some corporate trademarks make for popular tattoos among brand loyalists, including the Harley-Davidson crest, Ironman “M-Dot” and Nike swoosh. In other instances, companies encourage employees to tattoo themselves with the corporate trademark by offering financial benefits. In either case, individuals with trademark-based tattoos can find themselves exposed to an infringement lawsuit.

Under this standard, nearly anyone with a trademark-based tattoo could be subject to a trademark lawsuit.

Athletes, entertainers and other public figures are probably most at risk of violating copyright or trademark law through their body art. By virtue of their careers, these figures are regularly in the public eye and using their physical appearance, skills and bodies to market themselves and the goods and services connected to their livelihoods.

But, the nonfamous may also find themselves using trademark tattoos in commerce through photos and marketing materials related to their own companies, similar to Sam Penix. In addition, because the internet and social media have made nearly every contact a potentially commercial endeavor, many people could find themselves exposed to trademark infringement lawsuits based on their tattoos.

According to current trademark law, if a person is ultimately found liable for trademark infringement, he or she could be required to pay money damages, court costs and attorney fees. A court could also require that the person stop using the trademark as well as destruction of infringing items. In the trademark-based tattoo context, one can imagine how practical issues might come in to play. Could a court, for example, require tattoo removal? Though highly unlikely, the plain language of the law does not foreclose such an option. What is more likely is that a person may be precluded from displaying the tattoo in commercial photography and appearances.

Until courts and legislators create innovative legal solutions, both tattoo artists and people with tattoos should consider copyright agreements that specifically outline who owns a resulting tattoo. People with trademark tattoos should be aware that displaying their tattoos visibly in commerce could lead to liability. Otherwise, tattooed skin may end up with several owners with competing interests – and even if you live within that skin, you may not own the art that adorns it. by Jeffrey Miller, Colorado State University
Nothing says Christmas quite like a fruitcake – or, at the very least, a fruitcake joke. What Will They Say About You When You're Gone?

by Rabbi Daniel Cohen
In the past twenty years, I’ve come to appreciate that my personal awakening motivates me, defines…

Trapped in Therapy? The Problem with Psychiatry and Psychotherapy

by Robert T. London, M.D.
In the first year of training, which was mainly inpatient psychiatry, learning to treat patients,…

The Aftermath of the US Elections: Healing and Finding Common Ground

by Allison Carmen
Now that the Presidential election is over, we can start to think about what life is going to be…