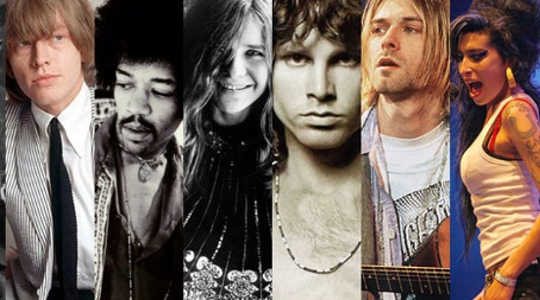 Prince’s autopsy has determined that the artist died of an accidental overdose of the synthetic opioid fentanyl. The news comes on the heels of the death of former Megadeth drummer Nick Menza, who collapsed on stage and died in late May.

Indeed, it seems as though before we can even finish mourning the loss of one pop star, another falls. There’s no shortage of groundbreaking artists who die prematurely, whether it’s Michael Jackson, Elvis Presley or Hank Williams.

As a physician, I’ve begun to wonder: Is being a superstar incompatible with a long, healthy life? Are there certain conditions that are more likely to cause a star’s demise? And finally, what might be some of the underlying reasons for these early deaths?

To find out the answer to each of these questions, I analyzed the 252 individuals who made Rolling Stone’s list of the 100 greatest artists of the rock & roll era.

There were six homicides, which occurred for a range of reasons, from the psychiatric obsession that led to the shooting of John Lennon to the planned “hits” on rappers Tupac Shakur and Jam Master Jay. There’s still a good deal of controversy about the shooting of Sam Cooke by a female hotel manager (who was likely protecting a prostitute who had robbed Cooke). Al Jackson Jr., the renowned drummer with Booker T & the MGs, was shot in the back five times in 1975 by a burglar in a case that still baffles authorities.

An accident can happen to anyone, but these artists seem to have more than their share. There were numerous accidental overdoses – Sid Vicious of the Sex Pistols at age 21, David Ruffin of the Temptations at 50, The Drifters' Rudy Lewis at 27, and country great Gram Parsons, who was found dead at 26.

And while your odds of dying in a plane crash are about one in five million, if you’re on Rolling Stone’s list, those odds jump to one in 84: Buddy Holly, Otis Redding and Ronnie Van Zant of the Lynyrd Skynyrd Band all died in airplane accidents while on tour.

A drink, a smoke and a jolt

Among the general population, liver-related diseases are behind only 1.4 percent of deaths. Among the Rolling Stone’s 100 Greatest Artists, however, the rate is three times that.

It’s likely tied to the elevated alcohol and drug use among artists. Liver bile duct cancers – which are extremely rare – happened to two of the top 100, with Ray Manzarek of The Doors and Tommy Ramone of the Ramones both succumbing prematurely from a cancer that normally affects one in 100,000 people a year.

The vast majority of those on Rolling Stone’s list were born in the 1940s and reached maturity during the 1960s, when tobacco smoking peaked. So not surprisingly, a significant portion of artists died from lung cancer: George Harrison of the Beatles at age 58, Carl Wilson of the Beach Boys at 51, Richard White of Pink Floyd at 65, Eddie Kendricks of the Temptations at 52 and Obie Benson of the Four Tops at 69. Throat cancer – also linked with smoking – caused the deaths of country great Carl Perkins at 65 and Levon Helm of The Band at 71.

A good number from the list had heart attacks or heart failure, such as Ian Stewart of the Rolling Stones at 47 and blues greats Muddy Waters at 70, Howlin Wolf at 65, Roy Orbison at 52 and Jackie Wilson at 49.

We recently saw The Eagles' Glenn Frey succumb to pneumonia, but so did soul singer Jackie Wilson at age 49, nine years after a massive heart attack. James Brown complained of a persistent cough and declining health before he passed at 73, with the cause of death listed as congestive heart failure as a result of pneumonia.

Currently, the U.S. is in the midst of an opioid abuse epidemic, with heroin and prescription drug overdoses happening at historic rates.

Factoring in their birth year and a life expectancy of 76 years, only 44 should have died by now. Instead, 82 have. (Incidentally, of the 44 we would have expected to be dead by now, 19 are still alive.)

The second shocking discovery was the sobering and disproportional occurrence of alcohol- and drug-related deaths.

There was Kurt Cobain’s gunshot suicide while intoxicated and Duane Allman’s drunk driving motorcycle crash. Members of legendary bands like The Who (John Entwistle, 57, and Keith Moon, 32), The Doors (Jim Morrison, 27), The Byrds (Gene Clark, 46, and Micheal Clarke, 47) and The Band (Rick Danko, 55, and Richard Manuel, 42) all succumbed to alcohol or drugs.

Others – The Grateful Dead’s Jerry Garcia and country star Hank Williams – steadily declined from substance abuse while their organs deteriorated. Their official causes of death were heart-related. In truth, the cause may have been more directly related to substance abuse.

In all, alcohol and drugs accounted for at least one in 10 of these great artists' deaths.

Does a quest for fame lead to an early demise?

Many have explored the root causes behind these premature deaths.

One answer may come from dysfunctional childhoods: experiencing physical or sexual abuse, having a depressed parent or having a family broken up by tragedy or divorce. An article published in the British Medical Journal found that “adverse childhood experiences” may act as a motivator to become successful and famous as a way to move past childhood trauma.

A somewhat similar hypothesis is proposed by the Self Determination Theory, which addresses human motivation through the lens of “intrinsic” versus “extrinsic” life aspirations. People who have intrinsic goals seek inward happiness and contentment. On the other hand, people who possess extrinsic goals focus on material success, fame and wealth – the exact sort of thing attained by these exceptional artists. According to research, people who have extrinsic goals tend to have had less-involved parents and are more likely to experience bouts of depression.

Psychiatrist Arnold Ludwig, in his meta-analysis of over 1,000 people, “The Price of Greatness: Resolving the Creativity and Madness Controversy,” concluded that artists, compared to other professions, were much more likely to have mental illnesses, and were prone to being afflicted with them for longer periods of time.

Meanwhile, Cornell psychiatrist William Frosch, author of “Moods, madness, and music: Major affective disease and musical creativity,” was able to connect the creativity of groundbreaking musical artists to their psychiatric disorders. According to Frosch, their mental illnesses were behind their creative output.

My review also confirmed a greater incidence of mood disorders among these Great 100 rock stars. Numerous studies have shown that depression, bipolar disease and related diagnoses come with an increased risk for premature death, suicide and addiction.

Greg Hall, Assistant Clinical Professor, Case Western Reserve University. He has co-chaired the City of Cleveland’s Public Health Advisory Committee, and co-chaired the leadership board of Steps to a Healthier Cleveland which oversaw health awareness and improvement activities throughout the area. Tattoo Regret: Can You Make It Go Away?

by Greg Hall, Case Western Reserve University
Almost half of people between 18 and 35 have tattoos, and almost one in four regrets it, according…