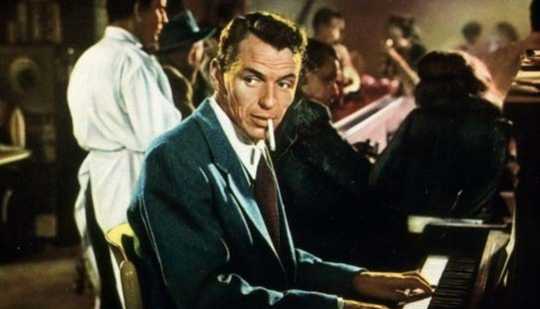 A still from Young at Heart, with Sinatra seated at the piano. Warner Bros.

Frank Sinatra’s 100th birthday on December 12 is being celebrated with all the requisite fanfare: Alex Gibney’s HBO documentary Sinatra: All or Nothing at All, CBS' Sinatra 100 All-Star Grammy Concert, exhibits at the Lincoln Center and Grammy Museum, a London Palladium show and a number of book publications.

But while Sinatra was an extraordinary creative force in American popular music, his film career is often an afterthought, damned by the inconsistencies of a dual-career artist.

Yet it’s on the screen where Sinatra’s wider cultural significance lies.

If the 20th century was, as Time publisher Henry Luce termed it, “The American Century,” then Hollywood told the story of a nation reveling in its economic and cultural rise.

And if Hollywood provided the narrative, then its protagonist was the white American male, frequently depicted as a middle-class, married suburbanite.

Sinatra, in his films, explored the main tenets of this identity. But unlike many of his contemporaries, he offered a striking, alternative idea of masculinity.

In the 1940s, few would have thought that Frank Sinatra’s screen career would have any sort of lasting influence. Sinatra was often limited to playing implausibly naive characters in RKO and MGM musicals, and both studios attempted to suppress the potent sexuality that Sinatra had harnessed as a musician to induce hysteria among his teenaged fan base (known as bobby soxers).

But even in these musicals, we see the roots of his unconventional screen persona. While military triumph and notions of male bravery were fresh on everyone’s minds, Sinatra played sailors on shore leave whose greatest fear was the opposite sex (Anchors Aweigh and On the Town). In Take Me Out to the Ball Game, he portrayed a singing baseball player lit for audience consumption like a fully fledged glamour girl.

Sinatra’s screen image constantly challenged the period’s norms, disrupting the postwar obsession with the middle-class white male so incisively laid out in the first seasons of Mad Men. He was the antithesis of Gregory Peck’s Man in the Gray Flannel Suit, a character who symbolized both the trappings – and trap – of the American Dream.

In truth, the country was a mix of classes, races and ethnicities, despite minorities and the poor being relegated to a cultural hinterland. Sinatra, as a high-profile Italian-American, embodied this outsider, the man excluded from America’s postwar suburban success story.

He starred in 1955’s The Man with the Golden Arm, which tested the limits of Motion Picture Production Code censorship through its groundbreaking portrayal of heroin addiction. Playing a poker-dealing junkie named Frankie Machine, Sinatra presented a darker image of America, a world of urban losers who used drugs, alcohol and emotional blackmail as a means of escape, a place where – as one character puts it – “Everybody’s a habitual something.”

America’s postwar masculine ideal was always more myth than reality, and Sinatra reminds us of this in surprising places. Take the 1954 Warner Bros musical Young at Heart. For the first 30 minutes, it’s packed with optimistic self-assurance, as Doris Day and Gig Young court one another in an idyllic Connecticut setting. But the arrival of Sinatra’s working-class musical arranger – with a name changed from something “a little more Italian” – transforms the film into a feast of noir melodrama.

Vulnerable Loners On The Margins

Sinatra instead has a more mature take, conveying a world-weariness borne of the veteran’s experience. In Some Came Running (1958) he plays a war hero author who, in desperation, marries Shirley MacLaine’s sweet floozy (“I’m just tired of being lonely, that’s all”). And in The Manchurian Candidate he skillfully portrays a Korean war veteran in the midst of a breakdown.

Even Sinatra’s playboy characters were a direct challenge to the middle-class male ideal that Playboy started promoting in its first issue in 1953. While the magazine repeatedly expressed its admiration for Sinatra’s sexually liberated male lifestyle, describing him as “surely the hippest of the hip,” it balked at the kind of working-class persona Sinatra exuded in a film like Pal Joey (1957).

For Playboy, a man’s refinement was marked by his education and an understated Ivy League style, alongside ownership of “the hi-fi set in mahogany console” and “the racy little Triumph.” Sinatra’s Joey Evans, on the other hand, is an MC who trades sex with Rita Hayworth’s wealthy widow for a share in a nightclub. But Joey’s attempt at sophistication – donning a smoking jacket and monogrammed slippers – ensures he remains no more than a gigolo.

Significantly, in a nod to America’s ultimate outsiders, Sinatra didn’t hesitate to tie his films to the burning issue of the time: civil rights.

While the US Army remained segregated, Sinatra’s 1945 short The House I Live In aimed to teach racial tolerance to a younger generation. And only months after news cameras captured angry white southerners protesting the desegregation of a school in Little Rock, Arkansas, Sinatra’s Kings Go Forth suggested that racism and inequality weren’t just Southern problems – they were nationwide afflictions.

So as you celebrate Sinatra’s 100th birthday by popping in Songs for Swingin' Lovers or In the Wee Small Hours, it’s important to remember that his films and on-screen characters also form an essential part of his cultural legacy.

In peeling away the sanitized sheen of postwar, middle-class America, Sinatra largely succeeded in exposing (to borrow from Frankie Machine) a “down and dirty” side of masculinity that Hollywood largely ignored.

Karen McNally, Senior Lecturer in Film and Television Studies, London Metropolitan University. My publications include a variety of journal articles and book chapters and the following books: Billy Wilder, Movie-Maker: Critical Essays on the Films (McFarland, 2011) and When Frankie Went to Hollywood: Frank Sinatra and American Male Male Identity (University of Illinois Press, 2008). Why Christmas Movies Are So Appealing This Holiday Season

by S. Brent Rodriguez-Plate
With the pandemic limiting travel over the holiday season, many Americans will be settling in front… by Sarah Atkinson and Helen W. Kennedy
Disney’s recent deal with the immersive experience company Secret Cinema signals a new era for the… Why Am I, An Animal Communicator, Not Vegetarian?

by Nancy Windheart
Ironically, for me, becoming an animal communicator coincided with shifting away from my previous…

by Pauline Wills
Many ancient cultures, such as the Incas, Egyptians and Tibetans, believed in and taught breathing…

What Are The Chances? Right Place, Right Time, Right Purpose

by Alan Cohen
Do you believe that the universe operates at random, or is there a higher intelligence that…