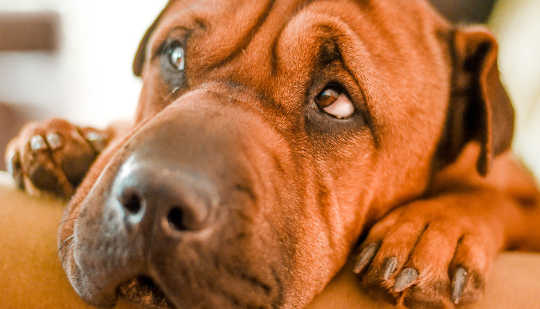 "Many people think today's family dog is spoiled and has it all too good. However, they often suffer from loneliness.." says Iben Meyer. (Credit: Sophie Elvis/Unsplash)

Dogs that live with a family have it better than dogs that roam free when it comes to safety, nutritious food, and vet care. But it’s a different story with regards to their mental health.

You would need to travel far from Denmark to meet a dog that roams the village streets freely, without belonging to any one family, one that may seem a bit shabby and underweight. One could easily believe that “village dogs” would be better off in a safe and stable environment alongside a family in suburban Denmark. But things aren’t quite that simple.

The life of a typical Danish “family dog” comes with a price. Dogs have evolved to run freely among other dogs and humans, according to researchers at the University of Copenhagen’s veterinary and animal sciences department and food and resource economics department. In a new study, the researchers compare the welfare of the modern family dog and the free-roaming village dog.

“Many people think today’s family dog is spoiled and has it all too good. However, they often suffer from loneliness and the unrealistic social expectations of owners. This can eventuate in anxiety, depression, and even aggressive behavior—problems that village dogs typically don’t have,” explains Iben Meyer, assistant professor, veterinarian, and first author of the study in Applied Animal Behaviour Science.

The shared history of dogs and humans extends 10,000 years, to the time when dogs first became domesticated as pets. But over the past two centuries, the typical dog’s life has changed dramatically. Dogs have gradually evolved from living freely on farms, where there were always people around and other dogs nearby, to moving into small urban homes, as pets which were acquired to satisfy their owners, with confinement and loneliness built into the equation.

In today’s Denmark, where dogs are not allowed to roam freely in public spaces, the free-roaming village dog no longer exists.

To compare the typical Danish family dog’s welfare with something more “original,” the researchers looked at studies of village dogs in Mexico. Along with many other less economically developed countries, Mexico is home to the majority of dogs in the world today. Many of these dogs live a life closer to their species’ primal nature.

“Until about 50 years ago, there were still dogs in Denmark that lived more or less naturally. Since then, we have yanked them from their natural niche and created the modern family dog, which presents a few challenges for dogs,” explains coauthor Peter Sandøe, professor of bioethics.

For many families, 21st century work and institutional life means that people are away from home for a large portion of their day. During that time, dogs are left to their own devices. It is a life that doesn’t harmonize with the social needs of dogs, which need to spend time in the company of humans and other dogs.

“Dogs that are often left alone at home or that haven’t gotten progressively used to being alone can be affected by separation anxiety or other separation-related issues like boredom and frustration. At times, dogs vent their anxiety or frustration by gnawing on furniture, peeing on floors, or destroying homes. These are problems that prompt some owners to euthanize or give their dogs away. While most dogs suffer in a less destructive way, they don’t necessarily have fewer problems,” Meyer says.

In sharp contrast to the their largely lonely lives, we have extremely high expectations for how dogs should behave when with us. Preferably, a dog should be able to interact with other dogs, allow itself to be petted by strangers, and in general, be able to satisfy its owners—which is not always realistic.

Unlike the village dog, which often roams freely with other dogs in small packs, and chooses with whom and when it wants to be social, the family dog does not experience the same natural form of socialization.

“Most dog owners have heard that socialization is important—puppies need to learn to be with other dogs, etc. Therefore, people seek out places with many other dogs, expecting for their dog to be social on command. The problem is that this is not very natural for a dog, which can risk having a bad experience that persists and can contribute to developing problematic behavior,” Sandøe says.

“Socialization is about giving a puppy positive experiences with other dogs and humans. If your puppy’s boundaries are crossed or they don’t have the opportunity to pull away, it won’t have a good experience and could lead to problems with aggressive behavior. In my work, I’ve seen examples of owners who walk their dogs at night to avoid unpleasant encounters with other dogs or people. This type of problem can easily be caused by negative social experiences from earlier in a dog’s life,” Meyer adds.

Give your dog a break

To make life easier for your dog, researchers suggest that it is very much about accepting that our dogs cannot always live up to everything we expect of them. Dogs are social and not designed to be home alone, all day long. This needs to be considered before getting a dog.

“You need to consider whether your life can satisfy a dog’s social needs. Most dogs can learn to be alone for part of the day, but I think we can go further to meet the social needs of dogs compared to what we do today. For example, there is a rule in Sweden that dogs can only be left alone at home for six hours at a time,” says Sandøe.

Finally, we need to learn to take our dogs’ differences into account.

“Research demonstrates that dogs have very different personalities, even within the same breed. It is important to not paint all dogs with the same brush, and instead, learn to understand the dog that we live with. This is particularly true in social contexts, where we need to try to avoid forcing a dog into something that it doesn’t want to do. A dog owner’s most important job is to help their dog to live a good life within the limitations that come from growing up as a family pet in Denmark,” Meyer says. Aloe Has A Trick That Thirsty Crops Could Use by Susan Hazel and Tracey Taylor
Dogs get dementia too. But it’s often difficult to spot. Research published today shows how common… Why Noise Pollution Is Hurting Animals

by Fay Clark and Jacob Dunn
From construction projects to busy roads, aeroplanes and railways, human noise is everywhere. It is…