How Pets Builds Trust Among People 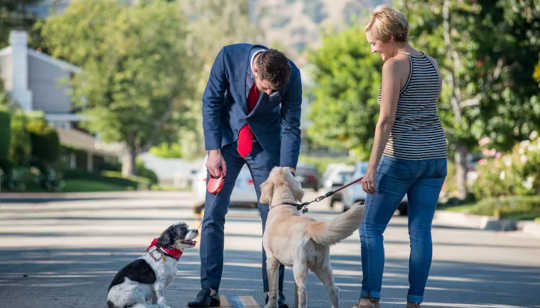 Two neighbors stop for a conversation while walking their dogs. Spiderplay/Collection E+ via Getty Images

Companion animals are a core part of family life in the United States, with 90 million American households having at least one pet. Many of us view pets as beloved family members who provide nonjudgmental emotional support and companionship during times of stress.

That’s not all. Research shows our pets can also strengthen our relationships and trust with other people. In addition, pets contribute positively to trust in our broader social communities.

As many of us know, animals provide an avenue for approaching another person socially, serving as a conversational starting point for connection. Pet ownership alone could be a source of shared interest and knowledge, even among people who may not have similar interests otherwise.

Simply walking down the street with a dog can lead to significantly more social interactions than walking without a dog. Assistance dogs can also facilitate these interactions. One study found that individuals using a wheelchair were more likely to be approached when their assistance animal was present.

For children, interacting with a pet can also provide an additional opportunity to practice positive social interactions and develop empathy and compassion. Recent research indicates that living with dogs is associated with better social and emotional skills for children. In our own research at the Tufts Pets and Well-Being Lab, we also found that teenagers with high levels of attachment to their pets were likely to have higher levels of social skills and empathy toward others than those without such attachments.

Pets have also been shown to foster social capital in communities. Social capital is a concept that encompasses the broader community and neighborhood networks of social relationships, and the degree to which the community has a culture of helping others. The trust inherent in these connections can lead to better health and well-being.

Interestingly, pet owners have consistently reported higher levels of social capital in their communities than people without pets, both in the United States and internationally.

In addition to social facilitation, pets can contribute to social capital by strengthening social trust within communities. Neighbors may rely on one another to assist with animal care, which builds reciprocal trust. Pet owners’ use of shared spaces, such as dog parks or green spaces, can lead to better social relationships.

In spite of it, during the COVID-19 pandemic dog owners were more likely than those without dogs to go for regular walks outdoors, providing an opportunity for community engagement during a period of extreme social isolation. The presence of an animal has even been found to increase positive social interactions in the workplace.

While evidence continues to support the idea that pets foster positive interactions between people, animals are not a universal solution for creating trust. There is still a lot we need to learn about the interrelated relationships between pets and people. 3 Reasons Disinformation Is So Pervasive And What To Do